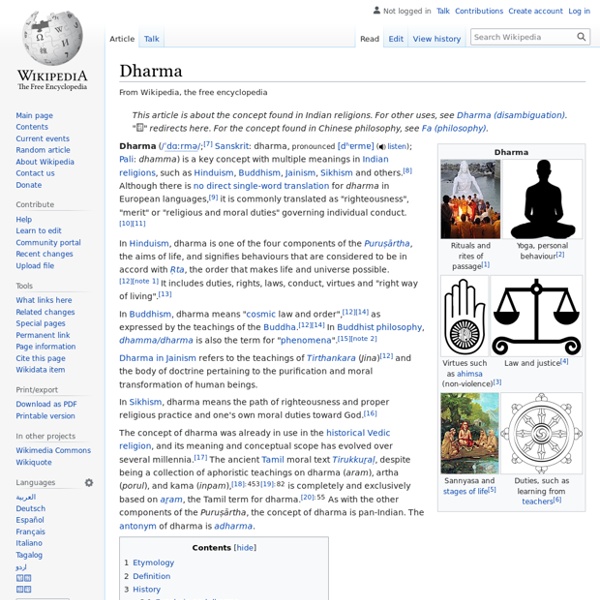 Key concept in Indian philosophy and Eastern religions, with multiple meanings Dharma (;[7] Sanskrit: धर्म, romanized: dharma, pronounced [dʱɐrmɐ] ( listen) (Pali: dhamma) (Tamil: aṟam)) is a key concept with multiple meanings in Indian religions, such as Hinduism, Buddhism, Jainism, Sikhism and others.[8] Although there is no direct single-word translation for dharma in Western languages,[9] it's commonly translated as “righteousness”, “merit” or “religious and moral duties” governing individual conduct.[11] In Hinduism, dharma is one of the four components of the Puruṣārtha, the aims of life, and signifies behaviours that are considered to be in accord with Ṛta, the order that makes life and universe possible.[12][note 1] It includes duties, rights, laws, conduct, virtues and "right way of living".[13] In Sikhism, dharma means the path of righteousness and proper religious practice And one's own moral duties toward God.[16] Etymology[edit] Definition[edit] History[edit] Hinduism[edit] In Pali

Artha Artha[pronunciation?] (Sanskrit: अर्थ) is one of the four aims of human life in Indian philosophy.[1] The word artha literally translates as “meaning, sense, goal, purpose or essence” depending on the context.[4] Artha is also a broader concept in the scriptures of Hinduism. As a concept, it has multiple meanings, all of which imply “means of life”, activities and resources that enables one to be in a state one wants to be in.[2] Artha applies to both an individual and a government. Arya (Buddhism) The term is used in the following contexts: The Four Noble Truths are called the catvāry ārya satyāni (Sanskrit) or cattāri ariya saccāni (Pali).The Noble Eightfold Path is called the ārya mārga (Sanskrit, also āryāṣṭāṅgikamārga) or ariya magga (Pāli).Buddha's Dharma and Vinaya are the ariyassa dhammavinayo.In Buddhist texts, the āryas are those who have the Buddhist śīla (Pāli sīla, meaning "virtue") and follow the Buddhist path.Buddhists who have attained one of the four levels of awakening (stream-entry, once-returner, non-returner, arahant) are themselves called ariya puggalas (Arya persons). In the context of the four noble truths, contemporary scholars explain the meaning of ārya as follows: The word "noble," or ariya, is used by the Buddha to designate a particular type of person, the type of person which it is the aim of his teaching to create. In the discourses the Buddha classifies human beings into two broad categories.

Kama Deity Kama whose arrows trigger desire Love, Male and Female, Tantric Yantra Aesthetic pleasure from arts, nature[2] Kama, in Hinduism, is one of the four goals of human life.[1] Above illustrate examples of kama. Kama (Sanskrit, Pali; Devanagari: काम) means "desire, wish, longing" in Hindu and Buddhist literature.[3] Kama often connotes sexual desire and longing in contemporary literature, but the concept more broadly refers to any desire, wish, passion, longing, pleasure of the senses, desire for, longing to and after, the aesthetic enjoyment of life, affection, or love, enjoyment of love is particularly with or without enjoyment of sexual, sensual and erotic desire, and may be without sexual connotations.[4][5] Definition and meaning[edit]

Moksha In Indian religions and Indian philosophy, moksha (Sanskrit: मोक्ष mokṣa), also called vimoksha, vimukti and mukti,[1] means emancipation, liberation or release.[2] In the soteriological and eschatological sense, it connotes freedom from saṃsāra, the cycle of death and rebirth. In the epistemological and psychological sense, moksha connotes freedom, self-realization and self-knowledge.[4] In Hindu traditions, moksha is a central concept[5] and included as one of the four aspects and goals of human life; the other three goals are dharma (virtuous, proper, moral life), artha (material prosperity, income security, means of life), and kama (pleasure, sensuality, emotional fulfillment).[6] Together, these four aims of life are called Puruṣārtha in Hinduism.[7] The concept of moksha is found in Jainism, Buddhism and Hinduism.

Kama Sutra The Kama Sutra (/ˈkɑːmə ˈsuːtrə/; Sanskrit: कामसूत्र, pronunciation , Kāmasūtra) is an ancient Indian Sanskrit text on sexuality, eroticism and emotional fulfillment in life.[2][3] Attributed to Vātsyāyana, the Kama Sutra is neither exclusively nor predominantly a sex manual on sex positions,[5] but written as a guide to the "art-of-living" well, the nature of love, finding a life partner, maintaining one's love life, and other aspects pertaining to pleasure-oriented faculties of human life.[6][7] Kamasutra is the oldest surviving Hindu text on erotic love. TIBETAN BUDDHIST GODS, BODHISATTVAS AND BUDDHAS Maitreya The pantheon of gods in Tibetan Buddhism is derived mainly from Hinduism, Indian Buddhism and the Bon religion. In many cases characteristics of gods from all three faiths are merged into a single god. A Buddhist god, for example, may have been derived from Hinduism and given characteristics of a Bon religion spirit. Moreover, the gods are intended to show the many sides of enlightenment: a particular god may have a wrathful, vengeful side as well as a peaceful and beneficent side.