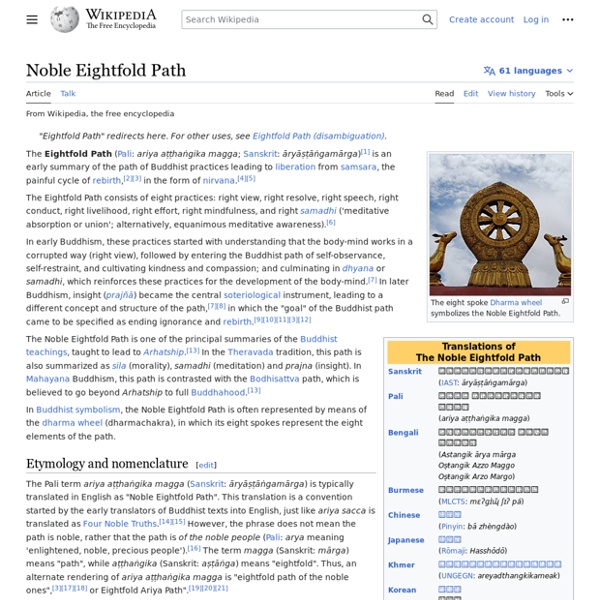 An early summary of the path of Buddhist practices leading to liberation from samsara The eight spoke Dharma wheel symbolizes the Noble Eightfold Path In Buddhist symbolism, the Noble Eightfold Path is often represented by means of the dharma wheel (dharmachakra), in which its eight spokes represent the eight elements of the path. Etymology and nomenclature[edit] The Pali term ariya aṭṭhaṅgika magga (Sanskrit: āryāṣṭāṅgamārga) is typically translated in English as "Noble Eightfold Path". This translation is a convention started by the early translators of Buddhist texts into English, just like ariya sacca is translated as Four Noble Truths. All eight elements of the Path begin with the word samyañc (in Sanskrit) or sammā (in Pāli) which means "right, proper, as it ought to be, best".[21] The Buddhist texts contrast samma with its opposite miccha.[21] The Eightfold Path[edit] Origin[edit] The Eight Divisions[edit] The Noble Eightfold Path of Buddhism Liberation[edit] (...) Tenfold Path[edit]

Related:  Leaving the matrix • Just So: An Odyssey into the Cosmic Web of Connection, Play, and True Pleasure • searchingsoul

Samsara, Karma & How To Escape - Alasdair Forsythe - Medium Samsara is a Sanskrit word often used to describe the cycles of life, be that the cycle of reincarnation, the cycle of heaven and hell, the cycle of karma resulting in good times and bad times (whether in one life or across reincarnations.) It has been said that a Buddha is one who has escaped Samsara, whom is now no longer affected by karma, no longer trapped within its grasp. In this article I will explain how to get there. To understand how to escape Samsara we must first understand what it is, truly. Skandha Skandhas (Sanskrit) or khandhas (Pāḷi) means "heaps, aggregates, collections, groupings".[1] In Buddhism, it refers to the five aggregates of clinging (Pancha-upadanakkhanda), the five bodily and mental factors that take part in the rise of craving and clinging. They are also explained as the five factors that constitute and explain a sentient being’s person and personality,[2][4] but this is a later interpretation in response to sarvastivadin essentialism. The five aggregates or heaps are: form (or matter or body) (rupa), sensations (or feelings, received from form) (vedana), perceptions (samjna), mental activity or formations (sankhara), and consciousness (vijnana).[5][6][7]

Ascension - Ascension Glossary Ascension, also known as Spiritual Awakening, is a simultaneous increase of Expanding Consciousness that occurs when our spiritual-energetic bodies connect into our physical bodies. Generally, the catalyst for spiritual Awakening is discovered through the process of progressive Kundalini activation that starts in the base of our spine and moves the intelligent energies up the spine and into the Crown. As a human being undergoes the Awakening process, which can progress gradually over many years, that person shifts into perceptions of higher consciousness, which can include increased awareness of energy in the environment, perceiving multidimensional realities, sensing extradimensional entities and feeling a direct communion with God and the interconnected energy that exists between all things. Ascension is a change in Spectrum of Frequency through Kundalini awakening and a change in the focus of our Consciousness. Ascension is about moving our Consciousness from one reality to another.

Impermanence Impermanence is a philosophical concept that appears in a variety of religions and philosophies. Indian religion[edit] The Pali word for impermanence, anicca, is a compound word consisting of "a" meaning non-, and "nicca" meaning "constant, continuous, permanent".[1] While 'nicca' is the concept of continuity and permanence, 'anicca' refers to its exact opposite; the absence of permanence and continuity. The term appears in the Rigveda, and is synonymous with the Sanskrit term anitya (a + nitya).[1][2] The term appears extensively in the Pali Canon.[1] Buddhism[edit]

Freedom Teachings ~ Ascension Dictionary June 30, 2017 RodrigoA The Teaching of Freedom that are the rightful heritage of the Christiac Angelic Human lineage of Earth are the Sacred Spiritual-Science teachings of the Maharata-Inner Christ and the historical record of creation in this Time Matrix as revealed through the evolution of the Emerald Covenant. True Freedom Teachings teaches gender and race equality and do not promote the worship of externalized god. It encourages bringing the peoples and religions of the world together under a common banner of Mutual Love, Respect and Angelic Human Freedom.

Five Tathagatas Cloth with painting of the Buddhas In Vajrayana Buddhism, the Five Tathāgatas (pañcatathāgata) or Five Wisdom Tathāgatas (Chinese: 五智如来; pinyin: Wǔzhì Rúlái), the Five Great Buddhas and the Five Jinas (Sanskrit for "conqueror" or "victor"), are emanations and representations of the five qualities of the Adi-Buddha or "first Buddha" Vairocana or Vajradhara, which is associated with the Dharmakāya.[1] They are also sometimes called the "dhyani-buddhas", a term first recorded in English by Brian Houghton Hodgson, a British Resident in Nepal,[2] in the early 19th century, and is unattested in any surviving traditional primary sources.[3] These five Buddhas are a common subject of Vajrayana mandalas. These five Buddhas feature prominently in various Buddhist Tantras and are the primary object of realization and meditation in Shingon Buddhism, a school of Vajarayana Buddhism founded in Japan by Kūkai. Origin[edit] Qualities[edit]

Essential Self 'Work' In Preparation For The Shift - How To Exit The Matrix By Michelle Walling, CHLC Editor, Howtoexitthematrix.com If you currently feel like you are without direction or perhaps you are struggling to ride the waves, there may still be a bit of self “work” that is left to clear your energy field. Those who have completed the self work are finally feeling unplugged from the matrix and are sharing how they achieved this. Mahavairochana Mahavairochana 大日如来 (Skt; Jpn Dainichi-nyorai) The introduction of Buddhism to Japan was one of the most important events in Japanese history and had a lasting effect on the development of its thought, art, and culture. According to Japanese sources, Buddhism was introduced from the Korean kingdom of Paekche in either 538 or 552 as part of a series of diplomatic exchanges that also led to a broader awareness of the beliefs and material culture of China and Korea. Vairochana, whose name means "infinite light," is worshipped as the primary Buddha in the Shingon sect of Esoteric Buddhism.

The Afterlife Hall Of Judgement – 42 Questions In Ancient Egypt the Judgement of The Dead took place in the Hall of Maat. Maat is often called the keeper of the Scales but she is The Scales. The newly deceased was led into the Hall by Anubis, The Opener Of The Ways and presented to Osiris. There were Assessors who asked the afterlife seeker searching questions about how they had lived their life. Vairocana/Mahāvairocana - Buddhism Introduction As one of the aspects and later designation of Vairocana (var. Virocana/Verocana), or the Luminous One, Mahāvairocana is a very important figure in the Buddhism of East Asia, Tibet, Nepal, and Java.

Related:
Related:  Leaving the matrix   -  Just So: An Odyssey into the Cosmic Web of Connection, Play, and True Pleasure   -  searchingsoul