International. From the Ashoka course The Buddha's Teaching As It Is taught by Bhikkhu Bodhi. 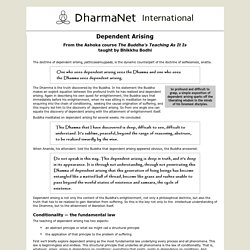 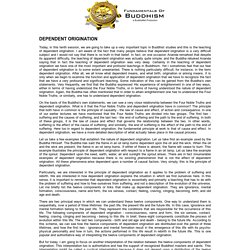 I am aware of the fact that many people believe that dependent origination is a very difficult subject and I would not say that there is no truth in that belief. Burning yourself paticca samuppada as a a description of the arising of a false sense of self modeled on vedic rituals, linda blanchard 2012. Wheel of becoming described. An Application of the Dependent Origination in Insight Meditation Practice. In this paper I am going to briefly focus on how the teaching of the Dependent Origination (Paṭiccasamuppāda) can be applied in meditation practice. 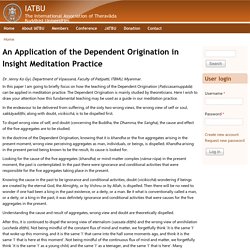 The Dependent Origination is mainly studied by theoreticians. Here I wish to draw your attention how this fundamental teaching may be used as a guide in our meditation practice. Transcendental Dependent Arising: A Translation and Exposition of the Upanisa Sutta. An Exposition of the Upanisa Sutta Dependent arising (paticcasamuppada) is the central principle of the Buddha's teaching, constituting both the objective content of its liberating insight and the germinative source for its vast network of doctrines and disciplines. 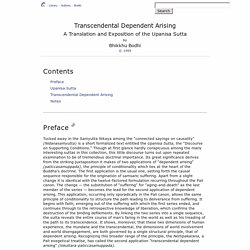 As the frame behind the four noble truths, the key to the perspective of the middle way, and the conduit to the realization of selflessness, it is the unifying theme running through the teaching's multifarious expressions, binding them together as diversified formulations of a single coherent vision. The earliest suttas equate dependent arising with the unique discovery of the Buddha's enlightenment, so profound and difficult to grasp that he at first hesitated to announce it to the world. A simple exposition of the principle sparks off the liberating wisdom in the minds of his foremost disciples, while skill in explaining its workings is made a qualification of an adroit expounder of the Dhamma. Faith (Saddha) Dependent Origination. I The General Principle of Dependent Origination "This being; that exists. 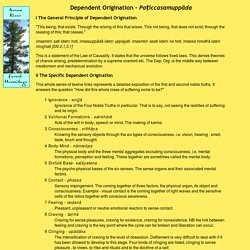 Through the arising of this that arises. This not being, that does not exist; through the ceasing of this; that ceases. " imasmiṃ sati idaṃ hoti, imassuppādā idaṃ uppajjati. imasmiṃ asati idaṃ na hoti, imassa nirodhā idaṃ nirujjhati [SN 2,1,3,1] 107b jul 2013 dependent origination chart in color. THE FIVE SKANDHAS AND THE TWELVE LINKS OF DEPENDENT ORIGINATION. In this Buddhist tradition, we chant "Namo" a lot. 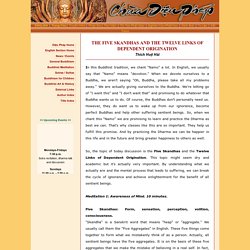 In English, we usually say that "Namo" means "devotion. " When we devote ourselves to a Buddha, we aren't saying "Oh, Buddha, please take all my problems away. " We are actually giving ourselves to the Buddha. We're letting go of "I want this" and "I don't want that" and promising to do whatever that Buddha wants us to do. Feldman DependantOrigination. Interactive Tour of the Wheel of Life.

Click on link: Interactive Tour of the Wheel of Life ] The Wheel of Life illustrates in a popular way the essence of the Buddhist teachings, the Four Truths: the existence of earthly suffering, its origin and cause, the ending or prevention of misery and the practice path to liberation from suffering. 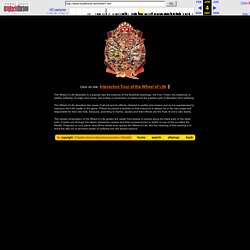 The Wheel of Life describes the cause of all evil and its effects, mirrored in earthly phenomena just as it is experienced by everyone from the cradle to the grave. Picture by picture it reminds us that everyone is always his or her own judge and responsible for their own fate, because, according to Karma, causes and their effects are the fruits of one's own deeds. International. Abhidhamma in daily life. Buddism in a Nutshell - Law of Dependent Origination. Contents 9.1 The Law of Dependent Origination 9.1.1 Related to Cause and Effect 9.1.2 Related to Inter-dependency 9.1.3 Related to Profundity 9.2 The Twelve Links of Dependent Origination 9.2.1 Sequential interpretation 9.2.2 Cyclic interpretation 9.3 The Twelve Links 9.3.1 Ignorance 9.3.2 Mental formation 9.3.3 Consciousness 9.3.4 Name and form 9.3.5 The Six senses 9.3.6 Contact 9.3.7 Feeling 9.3.8 Craving 9.3.9 Clinging 9.3.10 Becoming 9.3.11 Birth 9.3.12 Old age and death. 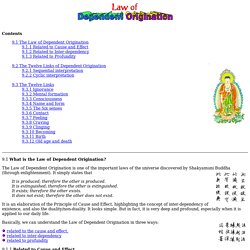 A Secular Understanding of Dependent Arising: Table of Contents. Americans seem to use “dependent origination” as the most common translation of paticca samuppada, but I don’t think we’re talking about “origination” so much as about what is arising, so I prefer “dependent arising”. 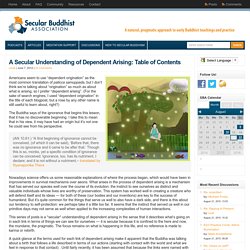 (For the sake of search engines, I used “dependent origination” in the title of each blogpost, but a rose by any other name is still useful to learn about, right?) The Buddha says of the ignorance that begins this lesson, that it has no discoverable beginning. I take this to mean that in his view, it may have had an origin but it’s not one he could see from his perspective. (AN 10.61:) “A first beginning of ignorance cannot be conceived, (of which it can be said), ‘Before that, there was no ignorance and it came to be after that.’ Though this is so, monks, yet a specific condition of ignorance can be conceived. Nowadays science offers us some reasonable explanations of where the process began, which would have been in improvements in survival mechanisms over aeons. Dependent Arising (Paticca Samuppada) Links « Just A Little Dust. Here is a growing list of links to some classic discussions of Dependent Arising (Paticcasamuppada), each followed by a sample quote from the page. 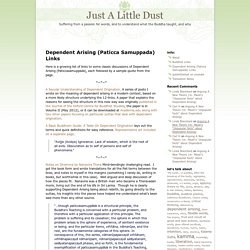 A Secular Understanding of Dependent Origination. A series of posts I wrote on the meaning of dependent arising in a modern context, based on a more likely structure underlying the 12-links. A paper that explains the reasons for seeing the structure in this new way was originally published in the Journal of the Oxford Centre for Buddhist Studies; the paper is in Volume II (May 2012), or it can be downloaded at Academia.edu along with two other papers focusing on particular suttas that deal with dependent origination. Samyutta Nikaya Study Guide. Ven. Prayudh Payutto (Ven. Phra Brahmagunabhorn)- Dependent Origination : The Buddhist Law of Conditionality.

Introduction. A Usable Map for Dependent Origination - Discussion - www.dharmaoverground.org. Hi chuck. Got an email from someone asking for help and thought of you asking for applicable examples in life using D.O. for solution. Here is the letter to me and the answer that was sent out. Glimpses of abhidharma chogyam trungpa. Lam rim outline. 12 links of dependent origination. 1 Paticcasamuppada Dependent Origination.

It was my original intention to write a detailed explanation for the study of the book Paticcasamuppada in the Words of the Buddha. But in the end, for reasons of health as well as other matters, I was not able to do so. As it happened, there was a talk I had given on another occasion which more or less fit just the purposes I wanted. That talk also appears in another book of this series, entitled Idappaccayata (The Law of Conditionality) It will prove quite useful for those studying Paticcasamuppada because, in fact, they are the very same thing. The only difference is that Idappaccayata is broader in scope. In any case, the student of Paticcasamuppada should use these explanatory notes as a starting point for his or her study.

Business writing. Early Meanings of Dependent Origination Shulman JIP 2008. A Basic Buddhism Guide: Dependent Arising. Upon the Full Moon of the month of Visakha, now more than two thousand five hundred years ago, the religious wanderer known as Gotama, formerly Prince Siddhartha and heir to the throne of the Sakiyan peoples, by his full insight into the Truth called Dharma which is this mind and body, became the One Perfectly Enlightened by himself.