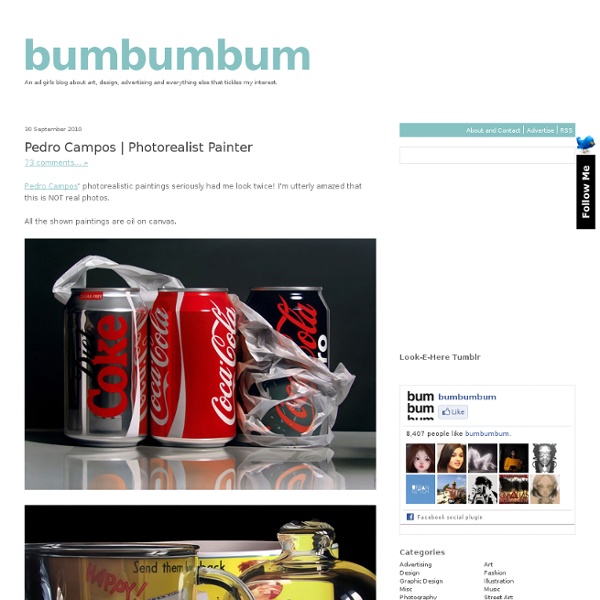 Pedro Campos‘ photorealistic paintings seriously had me look twice! I’m utterly amazed that this is NOT real photos. All the shown paintings are oil on canvas. Via Recave

21 Mind-Blowing Hyperreal Paintings As an outgrowth of photorealism, hyperrealism is a relatively new school of painting that creates the illusion that you're actually looking at a photo. With new technology in cameras and digital equipment, artists have been able to be far more precision-oriented. While photorealist painters tend to imitate photographic images and will consciously omit details, the hyperreal painter is more literal, incorporating photographic limitations such as depth of field, perspective and focus. Because hyperreal art creates a false reality, it requires a high level of skill. I've put together some of the most amazing hyperreal paintings that will make you question whether you're actually looking at a painting or a photograph. Simon HennesseySimon Hennessey is a hyperrealist that specializes in portraiture and the human figure. Medium: Acrylics Denis Peterson Denis Peterson is a hyperrealist painter that was as one of the first Photorealists to emerge in New York. Mediums: Acrylics and urethanes

Do It Yourself Doodler | David Jablow So I am many things in this world, but an artist is not one of them. However, David Jablow is just that, and an impressive one no less. His Flickr stream is hands down one of the most impressive I’ve ever seen. He’s taken a 1950′s style Peggy Sue magazine model and put different worlds around her using a single template. Blank This is the basic template used for the entire portfolio. Ninja Barn Angel v Devil Devil 1, Angel 0 Escapee Riveter There can be no distractions while working the high steel. The Dig I think I know how this ends for our favorite doodle. Trapeeze Painter Picasso he ain’t. Getaway Mermaid I would buy this match on pay-per-view. Mud Papoose’s Revenge Just supporting my statement that babies and toddlers are jerks. Brawl Weresquirrel Mr. Cat Burglar Spacegirl ———- Advertisement ———- ———- Advertisement ———- Fire Drop Body Slam Watcha gonna do brother!? Feeding Timewarp Rodeo Little disturbed by the bull. Goodbye Kitty Hobo Writer My writing area has never looked that bad. Bomber Talk Show Tanker Robot Caught

Drawings That Turns Into An Outstanding 3D Images Drawings That Turns Into An Outstanding 3D Images Posted on 25 April 2010 Crni Istvan Orosz is graphic designer and his work is recognized in some on animated films as animator and also a director in a few. This kind of art is called anamorphosis, it was invented in China. In the 16th century, this form is brought to Italy in the time of Renaissance. The technique is simple, conical or cylindrical mirror is placed on the drawing to transform a distorted drawing into an outstanding 3D picture that could be seen from different angles. Via István Orosz.