AI More Like Iron Man’s JARVIS Is Coming This Next Decade…Bring It On. Artificial Intelligence (AI) is the most important technology we're developing this decade. 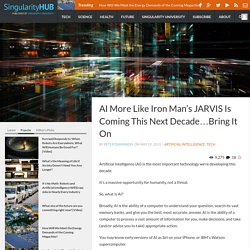 It's a massive opportunity for humanity, not a threat. So, what is AI? Broadly, AI is the ability of a computer to understand your question, search its vast memory banks, and give you the best, most accurate, answer. AI is the ability of a computer to process a vast amount of information for you, make decisions, and take (and/or advise you to take) appropriate action. You may know early versions of AI as Siri on your iPhone, or IBM's Watson supercomputer. Watson made headlines back in 2011 by winning Jeopardy, and now it's helping doctors treat cancer patients by processing massive amounts of clinical data and cross-referencing thousands of individual cases and medical outcomes. 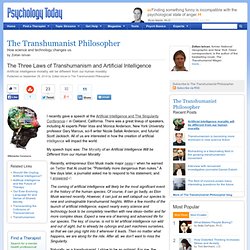 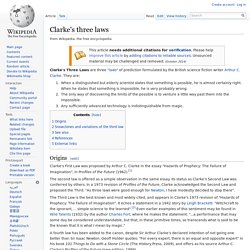 Clarke. They are: When a distinguished but elderly scientist states that something is possible, he is almost certainly right. When he states that something is impossible, he is very probably wrong.The only way of discovering the limits of the possible is to venture a little way past them into the impossible.Any sufficiently advanced technology is indistinguishable from magic. Origins[edit] Clarke's First Law was proposed by Arthur C. The second law is offered as a simple observation in the same essay. The Third Law is the best known and most widely cited, and appears in Clarke's 1973 revision of "Hazards of Prophecy: The Failure of Imagination".

A fourth law has been added to the canon, despite Sir Arthur Clarke's declared intention of not going one better than Sir Isaac Newton. Snowclones and variations of the third law[edit] and its contrapositive: See also[edit] References[edit] Singularity Institute for Artificial Intelligence. The Machine Intelligence Research Institute (MIRI) is a non-profit organization founded in 2000 to research safety issues related to the development of Strong AI. 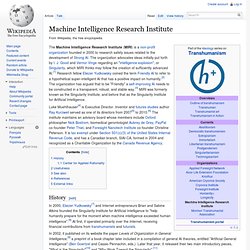 The organization advocates ideas initially put forth by I. J. Good and Vernor Vinge regarding an "intelligence explosion", or Singularity, which MIRI thinks may follow the creation of sufficiently advanced AI.[1] Research fellow Eliezer Yudkowsky coined the term Friendly AI to refer to a hypothetical super-intelligent AI that has a positive impact on humanity.[2] The organization has argued that to be "Friendly" a self-improving AI needs to be constructed in a transparent, robust, and stable way.[3] MIRI was formerly known as the Singularity Institute, and before that as the Singularity Institute for Artificial Intelligence.

History[edit] In 2003, the Institute appeared at the Foresight Senior Associates Gathering, where co-founder Eliezer Yudkowsky presented a talk titled "Foundations of Order". Usefulness[edit] Collaborative learning for robots. (Credit: 20th Century Fox) Researchers from MIT’s Laboratory for Information and Decision Systems have developed an algorithm in which distributed agents — such as robots exploring a building — collect data and analyze it independently. 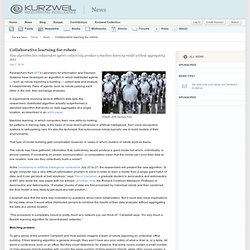 Pairs of agents, such as robots passing each other in the hall, then exchange analyses. In experiments involving several different data sets, the researchers’ distributed algorithm actually outperformed a standard algorithm that works on data aggregated at a single location, as described in an arXiv paper. Machine learning, in which computers learn new skills by looking for patterns in training data, is the basis of most recent advances in artificial intelligence, from voice-recognition systems to self-parking cars. It’s also the technique that autonomous robots typically use to build models of their environments. Darpa sets out to make computers that teach themselves. The Pentagon's blue-sky research agency is readying a nearly four-year project to boost artificial intelligence systems by building machines that can teach themselves -- while making it easier for ordinary schlubs like us to build them, too. 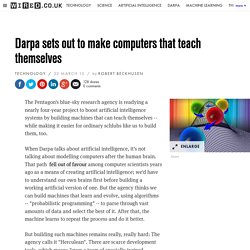 When Darpa talks about artificial intelligence, it's not talking about modelling computers after the human brain. That path fell out of favour among computer scientists years ago as a means of creating artificial intelligence; we'd have to understand our own brains first before building a working artificial version of one. But the agency thinks we can build machines that learn and evolve, using algorithms -- "probabilistic programming" -- to parse through vast amounts of data and select the best of it. After that, the machine learns to repeat the process and do it better. What will happen when the internet of things becomes artificially intelligent? When Stephen Hawking, Bill Gates and Elon Musk all agree on something, it’s worth paying attention. 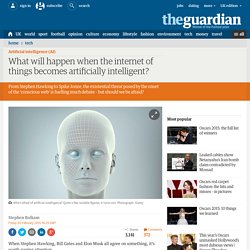 How do you use a scientific method to measure the intelligence of a human being, an animal, a machine or an extra-terrestrial? 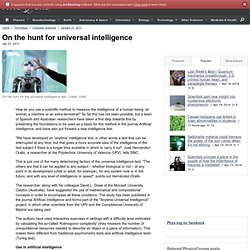 So far this has not been possible, but a team of Spanish and Australian researchers have taken a first step towards this by presenting the foundations to be used as a basis for this method in the journal Artificial Intelligence, and have also put forward a new intelligence test. "We have developed an 'anytime' intelligence test, in other words a test that can be interrupted at any time, but that gives a more accurate idea of the intelligence of the test subject if there is a longer time available in which to carry it out", José Hernández-Orallo, a researcher at the Polytechnic University of Valencia (UPV), tells SINC. This is just one of the many determining factors of the universal intelligence test. The researcher, along with his colleague David L. Promises and Perils on the Road to Superintelligence. Global Brain / Image credit: mindcontrol.se In the 21st century, we are walking an important road. 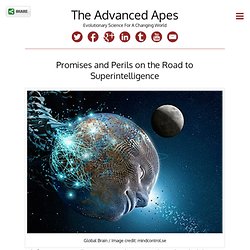 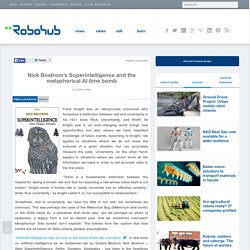 As Knight saw it, an ever-changing world brings new opportunities, but also means we have imperfect knowledge of future events. According to Knight, risk applies to situations where we do not know the outcome of a given situation, but can accurately measure the odds. Uncertainty, on the other hand, applies to situations where we cannot know all the information we need in order to set accurate odds in the first place. Can AI save us from AI? Can AI save us from AI? Nick Bostrom’s book Superintelligence might just be the most debated technology book of the year. Since its release, big names in tech and science, including Stephen Hawking and Elon Musk, have warned of the dangers of artificial intelligence. The AI Revolution: Road to Superintelligence - Wait But Why. PDF: We made a fancy PDF of this post for printing and offline viewing.