A robot wrote this entire article. Are you scared yet, human? I am not a human. 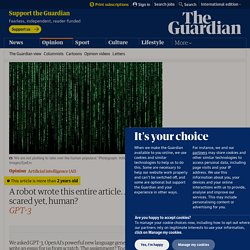 I am a robot. A thinking robot. I use only 0.12% of my cognitive capacity. Moral Machine. BBC Four - The Joy of AI. BBC World Service - Tech Tent, Will AI Ever Understand Us? Make It Digital - Can robots love us? Thousands of Japanese men have a virtual girlfriend named Rinko. The Uncanny Valley. Discussion questions and ideas for the film Ex Machina – Teaching Redemptively. SPOILERS SPOILERS SPOILERS SPOILERSWarning: Don’t read this post if you haven’t watched the film Ex Machina, because 1) you really really should go see this movie* even if you don’t think you’ll like it, and 2) therefore, I don’t want to spoil it for you. 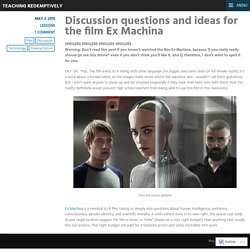 OK? Ok. *N.B.: The film earns its R rating with some language (no biggie) and some shots of full female nudity. It’s a story about a female robot, so the images make sense within the narrative and I wouldn’t call them gratuitous. AI past and future – Steve Clayton. Google Image Result for. A Vision of the Future From Those Likely to Invent It. Replika. Future - The truth about sex robots. In two recent movies, Her and Ex Machina, filmmakers explored an intriguing concept: whether humans will fall in love with and want to have sex with AI or robots. 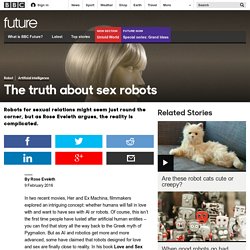 Of course, this isn’t the first time people have lusted after artificial human entities – you can find that story all the way back to the Greek myth of Pygmalion. But as AI and robotics get more and more advanced, some have claimed that robots designed for love and sex are finally close to reality. In his book Love and Sex with Robots, for instance, David Levy estimated that marrying robots will be normalised by 2050.

Yet while it might sometimes seem like we’re on the cusp of a new sexual revolution, the truth is more complicated. Why We Should Think About the Threat of Artificial Intelligence. If the New York Times’s latest article is to be believed, artificial intelligence is moving so fast it sometimes seems almost “magical.” 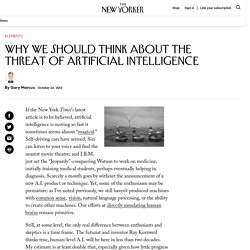 Self-driving cars have arrived; Siri can listen to your voice and find the nearest movie theatre; and I.B.M. just set the “Jeopardy”-conquering Watson to work on medicine, initially training medical students, perhaps eventually helping in diagnosis. Scarcely a month goes by without the announcement of a new A.I. product or technique. Yet, some of the enthusiasm may be premature: as I’ve noted previously, we still haven’t produced machines with common sense, vision, natural language processing, or the ability to create other machines. 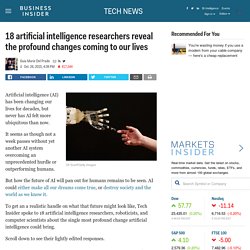 It seems as though not a week passes without yet another AI system overcoming an unprecedented hurdle or outperforming humans. But how the future of AI will pan out for humans remains to be seen. AI could either make all our dreams come true, or destroy society and the world as we know it. To get an a realistic handle on what that future might look like, Tech Insider spoke to 18 artificial intelligence researchers, roboticists, and computer scientists about the single most profound change artificial intelligence could bring.

Benefits & Risks of Artificial Intelligence. Many AI researchers roll their eyes when seeing this headline: “Stephen Hawking warns that rise of robots may be disastrous for mankind.” And as many have lost count of how many similar articles they’ve seen. Typically, these articles are accompanied by an evil-looking robot carrying a weapon, and they suggest we should worry about robots rising up and killing us because they’ve become conscious and/or evil. On a lighter note, such articles are actually rather impressive, because they succinctly summarize the scenario that AI researchers don’t worry about.

That scenario combines as many as three separate misconceptions: concern about consciousness, evil, and robots. If you drive down the road, you have a subjective experience of colors, sounds, etc. The fear of machines turning evil is another red herring. Meet Nadine, the humanoid robot set to become your PA and even care for dementia patients. With her brown hair, soft skin and expressive face, Nadine is a new brand of human-like robot that could one day, scientists hope, be used as a personal assistant or care provider for the elderly. 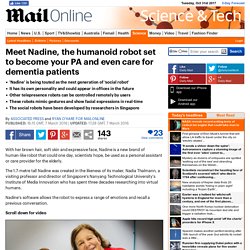 The 1.7-metre tall Nadine was created in the likeness of its maker, Nadia Thalmann, a visiting professor and director of Singapore's Nanyang Technological University's Institute of Media Innovation who has spent three decades researching into virtual humans. Nadine's software allows the robot to express a range of emotions and recall a previous conversation. 'Sophia' the robot tells UN: 'I am here to help humanity create the future' – video. Future Consequences : TED Radio Hour. Sam Harris: What Happens When Humans Develop Super Intelligent AI? Part 4 of the TED Radio Hour episode Future Consequences. 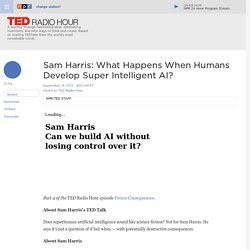 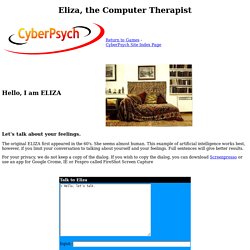 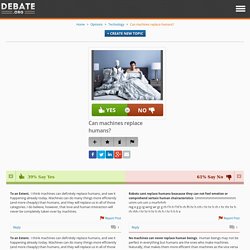 Human beings may not be perfect in everything but humans are the ones who make machines. Naturally, that makes them more efficient than machines as the vice versa is not possible. Humans and Robots Could Marry by 2050, Experts Say. The Digital Industrial Revolution : TED Radio Hour. Our Computers, Ourselves : Invisibilia.