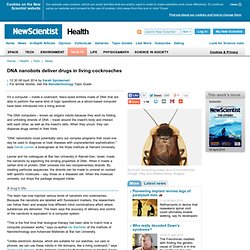 Nano-sized entities made of DNA that are able to perform the same kind of logic operations as a silicon-based computer have been introduced into a living animal. The DNA computers – known as origami robots because they work by folding and unfolding strands of DNA – travel around the insect's body and interact with each other, as well as the insect's cells. When they uncurl, they can dispense drugs carried in their folds. "DNA nanorobots could potentially carry out complex programs that could one day be used to diagnose or treat diseases with unprecedented sophistication," says Daniel Levner, a bioengineer at the Wyss Institute at Harvard University. Levner and his colleagues at Bar Ilan University in Ramat-Gan, Israel, made the nanobots by exploiting the binding properties of DNA. 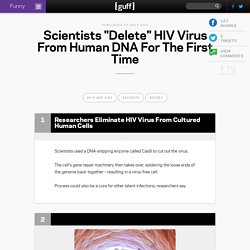 It inserts its deadly genome permanently into its victims' DNA, forcing them to require medical treatment for the rest of their life. But now, for the first time, researchers in Philadelphia have found a way to completely delete HIV from human cells by ‘snipping’ them out. The team of Temple University School of Medicine said the breakthrough marks the first successful attempt to eliminate latent HIV-1 virus from human cells – and could be a cure for other latent infections. ‘This is one important step on the path toward a permanent cure for AIDS,' said Kamel Khalili, PhD, Professor and Chair of the Department of Neuroscience at Temple.'It's an exciting discovery, but it's not yet ready to go into the clinic. In a study published by the Proceedings of the National Academy of Sciences, Dr Khalili and colleagues detail how they created molecular tools to delete the HIV-1 proviral DNA. Next-Gen Diagnostics, Nanotechnology, and Bioengineering Begin Taking the Fight to Cancer.

According to the World Health Organization (WHO), cancer claimed 8.2 million lives worldwide in 2012. 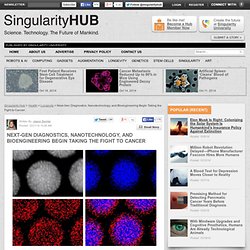 Perhaps no other disease highlights the need for improved diagnostic and treatment options better than cancer—which is why it’s good news there continue to be promising developments in the lab. Here are a few early studies we’ve covered this year. A Cancer Blood Test for Earlier Diagnosis? University of Bradford scientists, led by Dr. Diana Anderson, hypothesized that DNA in white blood cells from cancer patients wouldn’t be able to withstand or repair UV damage as well as DNA from healthy volunteers. After subjecting samples to ultraviolet light, the scientists pulled their DNA apart in electrophoresis gel (a traditional DNA analysis tool). Though the samples were randomized and coded, the researchers correctly identified 94 healthy subjects, 58 patients with cancer, and 56 patients in the precancerous stage of disease. Buy Time by Slowing Cancer’s Spread Progress But No Miracles. ‘Nanoneedles’ generate new blood vessels in mice, paving the way for new regenerative medicine.

Electron microscope image of a single human cell (brown) on a bed of nanoneedles (blue) (credit: Imperial College London) Scientists have developed “nanoneedles” that have successfully prompted parts of the body to generate new blood vessels, in a trial in mice. 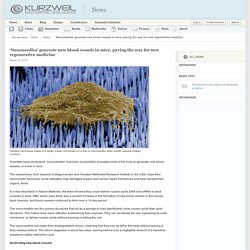 The researchers, from Imperial College London and Houston Methodist Research Institute in the USA, hope their nanoneedle technique could ultimately help damaged organs and nerves repair themselves and help transplanted organs thrive. In a trial described in Nature Materials, the team showed they could deliver nucleic acids DNA and siRNA to back muscles in mice. After seven days there was a six-fold increase in the formation of new blood vessels in the mouse back muscles, and blood vessels continued to form over a 14 day period. The nanoneedles are tiny porous structures that act as a sponge to load significantly more nucleic acids than solid structures.