There Is No “Should” In Agile. Really, Can You Be Agile and Not Disciplined? Sometimes people tell me, “Wow, you’re so disciplined!” 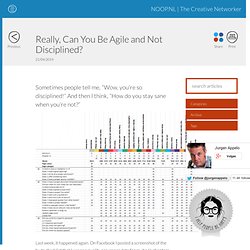 And then I think, “How do you stay sane when you’re not?” Last week, it happened again. On Facebook I posted a screenshot of the huge checklist that I use as a quality assurance gate for my book chapters. Some people commented that this looked quite disciplined. Frankly speaking, I don’t see what’s so special about my discipline. I don’t see how it can be any different. Agility versus Discipline Ever since Barry Boehm published his badly titled book Balancing Agility and Discipline, people have offered different views on the discipline issue in Agile communities.

Probably, all of them have good points. Check the work processes of a dozen Scrum teams and I bet you will find that most Scrum teams do not have a properly defined Definition of Done. Apparently, in software teams this view is uncommon. 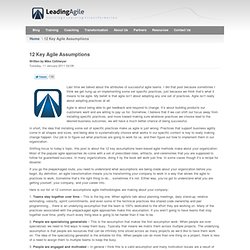 I did that post because sometimes I think we get hung up on implementing some set specific practices, just because we think that’s what it means to be agile. My belief is that agile isn’t about adopting any one set of practices. Agile isn’t really about adopting practices at all. Agile is about being able to get feedback and respond to change. In short, the idea that installing some set of specific practices make us agile is just wrong. Shifting focus to today’s topic, this post is about the 12 key assumptions team-based agile methods make about your organization.

If you go the prepackaged route, you need to understand what assumptions are being made about your organization before you begin. 12 Key Knowledge Areas for Agile. Written by Mike Cottmeyer Thursday, 13 January 2011 05:08 I think this is going to be my last 12 point list for the week. 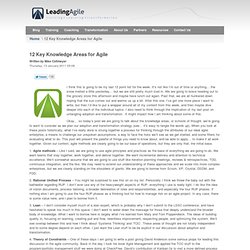 It’s not like I’m out of time or anything… the snow melted a little yesterday… but we are still pretty much iced in. We are going to brave heading out to the grocery store this afternoon and maybe have lunch out again. Past that, we are all hunkered down hoping that the sun comes out and warms us up a bit. After this one, I’ve got one more piece I want to write, but then I’d like to put a wrapper around all of my content from this week, and then maybe dive deeper into each of the individual topics. Okay… so today’s post we are going to talk about the knowledge areas, or schools of thought, we’re going to want to consider as we plan our adoption and transformation strategy (see… it’s easy to tangle the words up). 1. 2.

Failure IS an Option. This is an article asking you to fail. 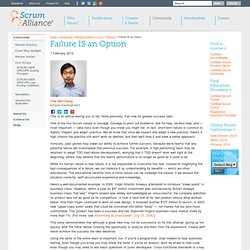 More precisely: Fail now for greater success later. One of the five Scrum values is courage. Courage to point out problems, ask for help, receive help, and — most important — take risks even though you know you might fail. In fact, short-term failure is common to Agile's "inspect and adapt" practice. We all know that once we inspect and adapt a new practice, there's a high chance the practice still won't work as desired, and then we'll drop it and seek a better approach. Ironically, past glories may lower our ability to achieve further success, because we're fearful that any potential failure will overshadow that previous success. While it's human nature to fear failure, it is not impossible to overcome this fear.

Here's a well-documented example: In 2000, Virgin Atlantic Airways attempted to introduce "sleep seats" in business class. Using the skills of the entire team is important, too. Your Path through Agile Fluency. Agile methods are solidly in the mainstream, but that popularity hasn't been without its problems. 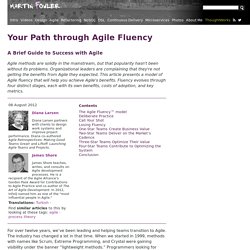 Organizational leaders are complaining that they're not getting the benefits from Agile they expected. This article presents a model of Agile fluency that will help you achieve Agile's benefits. Fluency evolves through four distinct stages, each with its own benefits, costs of adoption, and key metrics. For over twelve years, we’ve been leading and helping teams transition to Agile. The industry has changed a lot in that time. Throughout the next decade, Agile grew. The community grew, too. Agile Software Development: A People Business. Let's face it: People skills is not an area in which the software development community has traditionally excelled. 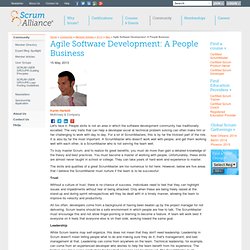 The very traits that can help a developer excel at technical problem solving can often make him or her challenging to work with day to day. For a lot of ScrumMasters, this is by far the trickiest part of the role. It is also by far the most important. A ScrumMaster who doesn't work well with people, and get them working well with each other, is a ScrumMaster who is not serving the team well.

To truly master Scrum, and to realize its great benefits, you must do more than gain a detailed knowledge of the theory and best practices. The skills and qualities of a great ScrumMaster are too numerous to list here. Trust. Brief History of Agile Movement. Brief History of Agile Movement Posted by Udayan Banerjee on March 23, 2012 · 24 Comments In February this year agile movement completes 11 years of existence. 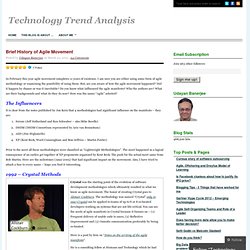 I am sure you are either using some form of agile methodology or examining the possibility of using them. But, are you aware of how the agile movement happened? Did it happen by chance or was it inevitable? The Influencers It is clear from the notes published by Jon Kern that 4 methodologies had significant influence on the manifesto – they are: Scrum (Jeff Sutherland and Ken Schwaber – also Mike Beedle)DSDM (DSDM Consortium represented by Arie van Bennekum)ASD (Jim Highsmith)XP (Kent Beck, Ward Cunningham and Ron Jeffries – Martin Fowler) Prior to the meet all these methodologies were classified as “Lightweight Methodologies”. 1992 – Crystal Methods 1993 – Refactoring 1994 – Dynamic Systems Development Method 1995 – Scrum and Pair Development.

There Are 2 Kinds of Writers: Architects and Gardeners. Designed by Dmitry Baranovskiy for the Noun Project The creative routines of famous creatives has been popular internet fodder this year. 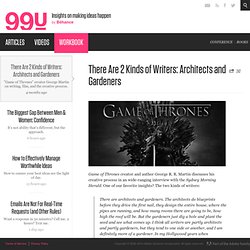 The Pacific Standard thinks this obsession and trend of emulating famous artist’s habits is problematic, to say the least. The larger picture, says Casey N. Cep, is that most artists did not always followed these routines they’re known for anyways. In the end they would have still produced genius work regardless of the kind of breakfast they ate, hours they worked, or whatever office supplies they used.