Confessions of an Unreal Engine 4 Engineering Firefighter. Author's Note After Release I'm really blown away by the reception of this article. 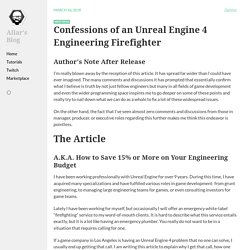 It has spread far wider than I could have ever imagined. The many comments and discussions it has prompted that essentially confirm what I believe is truth by not just fellow engineers but many in all fields of game development and even the wider programming space inspires me to go deeper on some of these points and really try to nail down what we can do as a whole to fix a lot of these widespread issues. On the other hand, the fact that I've seen almost zero comments and discussions from those in manager, producer, or executive roles regarding this further makes me think this endeavor is pointless.

SoftwareDevelopmentAttitude. Process theory · API design tags: Many debates in software development are underpinned by whether the speaker has a DirectingAttitude or an EnablingAttitude. 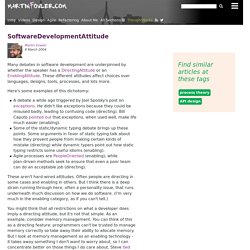 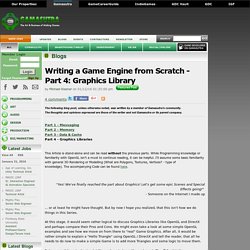 The thoughts and opinions expressed are those of the writer and not Gamasutra or its parent company. Part 1 - MessagingPart 2 - MemoryPart 3 - Data & CachePart 4 - Graphics Libraries This Article is stand-alone and can be read without the previous parts. While Programming knowledge or familiarity with OpenGL isn't a must to continue reading, it can be helpful. I'll assume some basic familiarity with general 3D Rendering or Modelling (What are Polygons, Textures, Vertices?

Edmond Lau: "The Effective Engineer" GTA V - Graphics Study - Adrian Courrèges. The Grand Theft Auto series has come a long way since the first opus came out back in 1997. About 2 years ago, Rockstar released GTA V. The game was an instant success, selling 11 million units over the first 24 hours and instantly smashing 7 world records. Having played it on PS3 I was quite impressed by the level of polish and the technical quality of the game.

Nothing kills immersion more than a loading screen: in GTA V you can play for hours, drive hundreds of kilometers into a huge open-world without a single interruption. Considering the heavy streaming of assets going on and the specs of the PS3 (256MB RAM and 256MB of video memory) I’m amazed the game doesn’t crash after 20 minutes, it’s a real technical prowess. Here I will be talking about the PC version in DirectX 11 mode, which eats up several GBs of memory from both the RAM and the GPU. Right Tools For The Job. After reading some of the many posts by my AltDevBlogADay colleagues this “meta” post started to formulate in my mind, here are examples of what triggered the train of thought that led to this one: 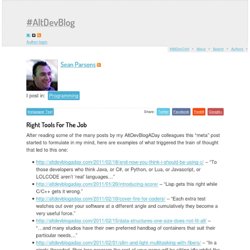 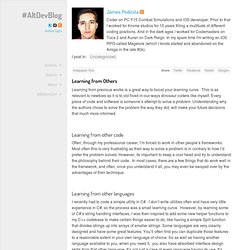 This is as relevant to newbies as it is to old fixed-in-our-ways dinosaur coders like myself. Every piece of code and software is someone’s attempt to solve a problem. Understanding why the authors chose to solve the problem the way they did, will make your future decisions that much more informed. Become a Good Programmer in Six Really Hard Steps. One of the more popular topics here on the GDNet forums goes something like this: "Hi, I just [bought a computer | wrote a simple game | discovered a game engine] and I want to know where to go from here. 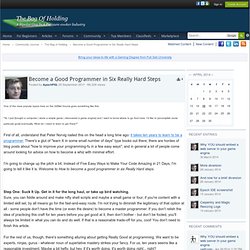 I'd like to [accomplish some particular goal] eventually. Features - Programmer, Interrupted. This article is being highlighted as one of Gamasutra's top stories of 2013. 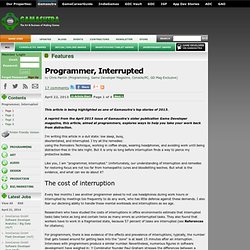 A reprint from the April 2013 issue of Gamaustra's sister publication Game Developer magazine, this article, aimed at programmers, explores ways to help you take your work back from distraction. I'm writing this article in a dull state: low sleep, busy, disorientated, and interrupted. I try all the remedies: using the Pomodoro Technique, working in coffee shops, wearing headphones, and avoiding work until being distraction-free in the late night. But it is only so long before interruption finds a way to pierce my protective bubble. Like you, I am "programmer, interrupted. " The Ten Commandments of Egoless Programming. What makes a great gameplay engineer? 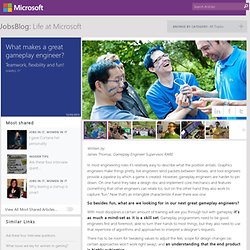 Graphics engineers make things pretty, live engineers send packets between Xboxes, and tool engineers provide a pipeline by which a game is created. However, gameplay engineers are harder to pin down. On one hand they take a design doc and implement core mechanics and features (something that other engineers can relate to), but on the other hand they also work to capture “fun.” Dad and The Ten Commandments of Egoless Programming - Stephen Wyatt Bush's Blog. Dad and I got to talk about programming for two weeks before he died.

I was 22, a senior in college completing a BFA in graphic design.