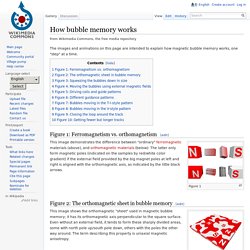 Figure 1: Ferromagnetism vs. orthomagnetism[edit] This image demonstrates the difference between "ordinary" ferromagnetic materials (above), and orthomagnetic materials (below): The latter only form magnetic poles (indicated on the samples by red/white color gradient) if the external field provided by the big magnet poles at left and right is aligned with the orthomagnetic axis, as indicated by the little black arrows. Figure 2: The orthomagnetic sheet in bubble memory[edit] This image shows the orthomagnetic "sheet" used in magnetic bubble memory; it has its orthomagnetic axis perpendicular to the square surface. Even without an external field, it tends to form these sharply divided areas, some with north pole up/south pole down, others with the poles the other way around. Figure 3: Squeezing the bubbles down in size[edit] Figure 5: Driving coils and guide patterns[edit]

Engineer Girl - 2013 Engineering: Essential to Our Health. The 2013 contest deadline has passed. 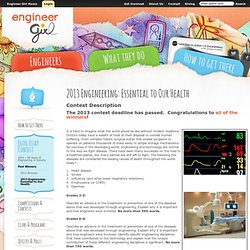 Congratulations to all of the winners! It is hard to imagine what the world would be like without modern medicine. Doctors today have a wealth of tools at their disposal to combat human suffering. From complex robotic surgical suites that enable surgeons to operate on patients thousands of miles away to simple storage mechanisms for vaccines in the developing world, engineering and technology are central to the way we fight disease. There have been many successes on the road to a healthier planet, but many battles are still left to fight. Heart disease Stroke Influenza (and other lower respiratory infections) Emphysema (or COPD) Diarrhea Grades 3-5: Describe an advance in the treatment or prevention of one of the diseases above that was developed through engineering. 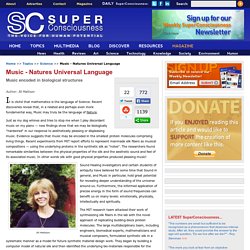 Recent discoveries reveal that, in a related and perhaps even more fundamental way, Music may truly be the language of Nature. Researchers synthesize new kind of silk fiber, and use music to fine-tune material's properties. Pound for pound, spider silk is one of the strongest materials known: Research by MIT's Markus Buehler has helped explain that this strength arises from silk's unusual hierarchical arrangement of protein building blocks.

Now Buehler -- together with David Kaplan of Tufts University and Joyce Wong of Boston University -- has synthesized new variants on silk's natural structure, and found a method for making further improvements in the synthetic material. And an ear for music, it turns out, might be a key to making those structural improvements. The work stems from a collaboration of civil and environmental engineers, mathematicians, biomedical engineers and musical composers. "We're trying to approach making materials in a different way," Buehler explains, "starting from the building blocks" -- in this case, the protein molecules that form the structure of silk. "It's very hard to do this; proteins are very complex. " Making such structures is no simple task. Explanation of the Motionless Electromagnetic Generator by Sachs's Theory of Electrodynamics. 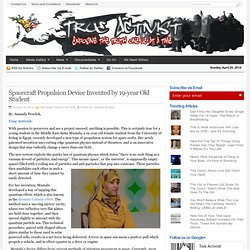 With passion to persevere and see a project succeed, anything is possible. This is certainly true for a young student in the Middle East.Aisha Mustafa, a 19-year old female student from the University of Sohag in Egypt, recently developed a new type of propulsion system for space crafts. Scientists improve microscopic batteries with homebuilt imaging analysis. (Phys.org) —In a rare case of having their cake and eating it too, scientists from the National Institute of Standards and Technology (NIST) and other institutions have developed a toolset that allows them to explore the complex interior of tiny, multi-layered batteries they devised. 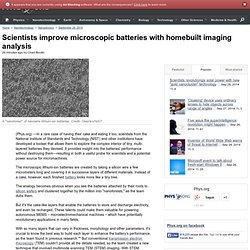 It provides insight into the batteries' performance without destroying them—resulting in both a useful probe for scientists and a potential power source for micromachines. The microscopic lithium-ion batteries are created by taking a silicon wire a few micrometers long and covering it in successive layers of different materials. Instead of a cake, however, each finished battery looks more like a tiny tree. 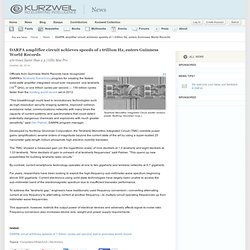 Officials from Guinness World Records have recognized DARPA’s Terahertz Electronics program for creating the fastest solid-state amplifier integrated circuit ever measured: one terahertz (1012 GHz), or one trillion cycles per second — 150 billion cycles faster than the existing world record set in 2012. “This breakthrough could lead to revolutionary technologies such as high-resolution security imaging systems, improved collision-avoidance radar, communications networks with many times the capacity of current systems, and spectrometers that could detect potentially dangerous chemicals and explosives with much greater sensitivity,” said Dev Palmer, DARPA program manager. Physicists create reversible laser tractor beam. Physicists have built a tractor beam out of lasers that can both repel and attract objects across distances 100 times farther than previously possible. 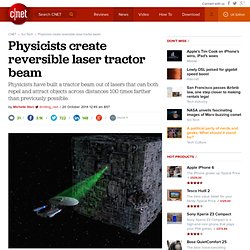 The groundbreaking tractor beam, made of a hollow laser beam (a laser bright around the edges and hollow in the centre), was able to move particles 0.2 mm in diameter distances up to 20 cm (7.87 in) -- around 100 times farther than has been achieved in previous experiments. "Demonstration of a large scale laser beam like this is a kind of holy grail for laser physicists," said Professor Wieslaw Krolikowski from the Research School of Physics and Engineering at The Australian National University.

Previous experiments, such as those conducted by the University of St Andrews, relied upon the motion of photons to propel particles on a microscopic level. The ANU's experiment, however, used the laser differently: rather than photon momentum, the team used heat. You can find the full paper online in the journal Nature Photonics. Move Over Tesla, this New Car is Powered by Salt Water and Has Over 900 Horsepower. In a breakthrough that is bound to catch the attention of the oil industry and even electric car makers, a company has just gained approval for its ‘salt water’ powered car in Europe. 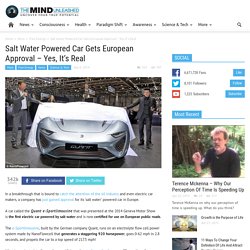 A car called the Quant e-Sportlimousine that was presented at the 2014 Geneva Motor Show is the first electric car powered by salt water and is now certified for use on European public roads. The e-Sportlimousine, built by the German company Quant, runs on an electrolyte flow cell power system made by NanoFlowcell that generates a staggering 920 horsepower, goes 0-62 mph in 2.8 seconds, and propels the car to a top speed of 217.5 mph! What is an electrolyte flow cell you ask? According to Green Car Congress, “Flow cells or flow batteries combine aspects of an electrochemical battery cell with those of a fuel cell.

The electrolytic fluids in flow cells—usually metallic salts in aqueous solution(salt water)—are pumped from tanks through the cell. “Low cost”, that sounds good to me. h/t intelligentliving.co. Award Search: Award#1362899 - Advanced Manufacturing Project-Learning in Focused Innovation (AMPLiFI) Award Abstract #1362899 Advanced Manufacturing Project-Learning in Focused Innovation (AMPLiFI) This project is creating a flexible technician education framework that draws on the experience of the National Network Manufacturing Institutes (NNMIs) to prepare the workforce for the advanced manufacturing technical occupations of the future. 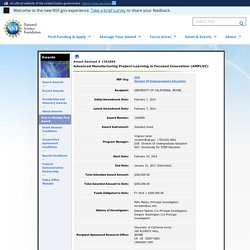 The framework is being developed and piloted for curricular materials focused on Additive Manufacturing (AM) in a manner that is broadly applicable to technician education programs in other technical areas to be determined under the NNMI program. In addition the framework and associated knowledge, skills and competencies are being built around broadly accepted national and international standards (e.g. Things Come Apart: A Teardown Manual for Modern Living: Todd McLellan: 9780500516768: Amazon.com: Books. J-TECH Innovation & Evolution - NHK WORLD - English. TORAY - Weaving the Future with Carbon Fiber Carbon fiber has come a long way since it was first used as a filament by Thomas Edison to create the first functional light bulb. Individually, those fibers lacked the tensile strength of today's modern fibers. Silicon Valley Isn't a Meritocracy. And It's Dangerous to Hero-Worship Entrepreneurs. In a cultural context where idealists have linked social media to democracy, egalitarianism, and participation, the tech scene in Silicon Valley considers itself to be exceptional.

Supporters speak glowingly of a singularly meritocratic environment where innovative entrepreneurs disrupt fusty old industries and facilitate sweeping social change. But if the tech scene is really a meritocracy, why are so many of its key players, from Mark Zuckerberg to Steve Jobs, white men? If entrepreneurs are born, not made, why are there so many programs attempting to create entrepreneurs?

If tech is truly game-changing, why are old-fashioned capitalism and the commodification of personal information never truly questioned? The myths of meritocracy and entrepreneurialism reinforce ideals of the tech scene that shore up its power structures and privileges. INFOGRAPHIC: Biometric Technology, Airport Security and the Changing Face of Travel. How a Microgrid Works" Once upon a time, there was a kingdom ruled by an all-powerful king.

Each day, the King would visit the villages in his domain, bringing every household the wonders of daily life: cold meats and cheeses, artificial lighting, air conditioning and the complete filmography of Vin Diesel on a high definition plasma screen. Central Kenya Farmers Using Solar Irrigation. MWEA, Kenya (AlertNet) – Farmers in Central Kenya are embracing solar technology as an environmentally friendly and cost-effective way to irrigate their land. Joseph Mutua has begun using a solar-powered pump to bring water from the nearby Nyamindi River to irrigate his export-bound food crops, which include French beans, baby corn and kale. Solar panels standing on tall metal poles are connected to a pump immersed in the river, 200 metres away. A pipe carries water from the pump to a storage tank at the farm, and from there it is directed through pipes to irrigate Mutua’s farmland.

Farmers generally use diesel or petrol engines to pump water, but increases in the price of oil are making these pumps increasingly expensive to run. Filipino Social Good Startups Win At IdeaSpace Competition. The results are in for Filipino accelerator IdeaSpace’s startup competition, and the top ten picks have a heavy focus on social projects. A glance at the list reveals a strong emphasis on environmental and health-related projects, especially those that will likely benefit the developing nation’s poorer regions. When the top 20 were picked, many of them were mobile-phone dependent and appeared to center around developing smartphone apps for urban cities. 14 Smart Inventions Inspired by Nature: Biomimicry: Nature as R&D Lab. Companies seeking breakthrough products tend to ignore the greatest invention machine in the universe: life’s more than three-billion-year history of evolution by natural selection.

Darwinians Try to Usurp Biomimetics Popularity. We Are One Step Closer to a Lightsaber. Large Scale Open Source Projects I can Get Involved with. Perepiteia. Toys that give girls confidence in problem-solving. Inventors Killed By Their Own Inventions. AMAZING INVENTIONS. Open Hardware. Geeky Gadgets.