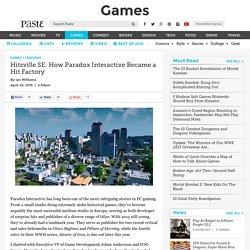 From a small studio doing extremely niche historical games, they’ve become arguably the most successful medium studio in Europe, serving as both developer of surprise hits and publisher of a diverse range of titles. With 2015 still young, they’ve already had a landmark year. They serve as publisher for two recent critical and sales behemoths in Cities Skylines and Pillars of Eternity, while the fourth entry in their WWII series, Hearts of Iron, is due out later this year. I chatted with Executive VP of Game Development Johan Andersson and COO Susana Meza Graham about where Paradox has been and where they’re headed after so much recent success.

I spoke with Andersson on Skype, while Meza Graham and I corresponded by email. Paste: So you’ve hit what can probably be deemed the big time, with both Cities Skylines and Pillars of Eternity breaking records. Also, mandatory crunch. Other people have plans. Hitbox Team - Développement pour un studio indé. Finding game sales data is notoriously hard. 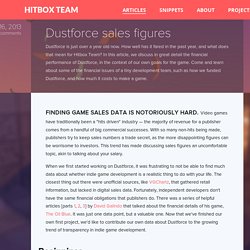 Video games have traditionally been a "hits driven" industry – the majority of revenue for a publisher comes from a handful of big commercial successes. With so many non-hits being made, publishers try to keep sales numbers a trade secret, as the more disappointing figures can be worrisome to investors. This trend has made discussing sales figures an uncomfortable topic, akin to talking about your salary.

When we first started working on Dustforce, it was frustrating to not be able to find much data about whether indie game development is a realistic thing to do with your life. The closest thing out there were unofficial sources, like VGChartz, that gathered retail information, but lacked in digital sales data. Beginnings Left: The original prototype of Dustforce, made in GameMaker. Dustforce started out as the project of the first half of Hitbox Team, Lexie and Woodley. Défis de développement : baldur's Gate Enhanced Edition. How did a PC classic get reborn as a multiplatform "enhanced edition"? 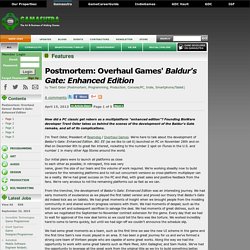 Founding BioWare developer Trent Oster takes us behind the scenes of the development of the Baldur's Gate remake, and all of its complications. I'm Trent Oster, President of Beamdog / Overhaul Games. We're here to talk about the development of Baldur's Gate: Enhanced Edition. BG: EE (as we like to call it) launched on PC on November 28th and on iPad on December 8th to great fan interest, rocketing to the number 2 spot on iTunes in the U.S. and number 1 in many other App Stores around the world.

Our initial plans were to launch all platforms as close to each other as possible; in retrospect, this was very naive, given the size of our team and the volume of work required. From the trenches, the development of Baldur's Gate: Enhanced Edition was an interesting journey. We had some great moments as a team, such as the first time we saw the new UI scheme in the game and the first time Sam's new music played in an area. 1. Richard Garriott on why "most game designers really just suck" When Ultima creator Richard Garriott stopped by to show me Shroud of the Avatar, his new RPG which just met its $1M Kickstarter funding goal, he brought along some objects for show and tell. 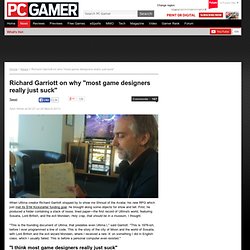 First, he produced a folder containing a stack of loose, lined paper—the first record of Ultima's world, featuring Sosaria, Lord British, and the evil Mondain. Holy crap, that should be in a museum, I thought. "This is the founding document of Ultima, that predates even Ultima I," said Garriott. The Knights of New Vegas: How Obsidian Survived Countless Catastrophes And Made Some Of The Coolest Role-Playing Games Ever.

I can't tell you the anger I felt when Interplay fired these guys after the monumentally good Fallout 2, when Fallout 3 (NOT JUST BALDURS GATE 3) was around 70% complete, and the void in my gaming life that Fallout's absence left; I have followed Obsidian from the start, and will continue to follow them because they DO make good games. 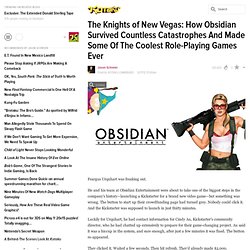 In my entire time playing Fallout New Vegas, I encountered fewer bugs and crashes than I EVER did while playing Fallout 3. (I had the 360 version. Constant graphical glitching and system crashing. No, it wasn't my 360, I still have it to this day and it works flawlessly.) I find online that Obsidian tend to get shit on from a great height, yet everyone has an enormous chubby for Bethesda. (On a sidenote, Fuck Bethesda for their absolutely backwards policy of using Metacritic as a barometer for wether Obsidian deserved to be paid their bonus for New Vegas.