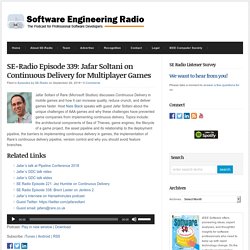 Host Nate Black speaks with guest Jafar Soltani about the unique challenges of AAA games and why these challenges have prevented game companies from implementing continuous delivery. Topics include: the architectural components of Sea of Thieves, game engines, the lifecycle of a game project, the asset pipeline and its relationship to the deployment pipeline, the barriers to implementing continuous delivery in games, the implementation of Rare’s continuous delivery pipeline, version control and why you should avoid feature branches. Podcast: Play in new window | Download. Automated testing in Sea of Thieves Presentation.pptx. Tests and Testability – Jessica Baker. It’s not exactly traditional to use automated testing in the game development process, but at Rare we’ve been developing our title Sea of Thieves with a continuous delivery method. 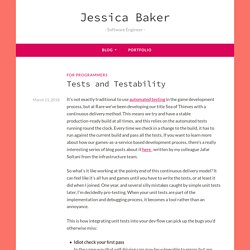 This means we try and have a stable production-ready build at all times, and this relies on the automated tests running round the clock. Every time we check in a change to the build, it has to run against the current build and pass all the tests. If you want to learn more about how our games-as-a-service based development process, there’s a really interesting series of blog posts about it here , written by my colleague Jafar Soltani from the infrastructure team. So what’s it like working at the pointy end of this continuous delivery model? It can feel like it’s all fun and games until you have to write the tests, or at least it did when I joined. 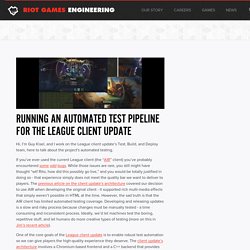 Technology plays a secondary role. No matter how much technology we have, we still need to encourage the right human behaviors in order to make automated testing a success. Every time a test fails, a human has to look at it and decide whether it’s a real failure in the project being tested, a poorly written test that’s misbehaving, or some sort of other environmental or infrastructure issue like a network glitch. A traditional test automation strategy is to have a quality assurance team maintain responsibility for developing and running tests.

This approach has merits - you end up with subject matter experts who fully own the test system. There are also significant drawbacks, however. Our philosophy is to make testing and automation a fundamental concern for the entire team. The Unity Engine QA Process. We often get requests to explain how we test the engine before we release it. 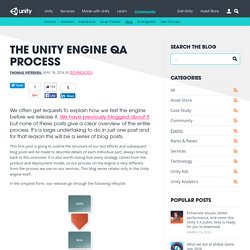 We have previously blogged about it, but none of these posts give a clear overview of the entire process. It’s a large undertaking to do in just one post and for that reason this will be a series of blog posts. This first post is going to outline the structure of our test efforts and subsequent blog posts will be made to describe details of each individual part, always linking back to this overview. It is also worth noting that every strategy comes from the product and deployment model, so our process on the engine is very different from the process we use on our services. This blog series relates only to the Unity engine itself. In the simplest form, our releases go through the following lifecycle: This is what is most obvious to our users, because our version numbering follows the same structure.

How Continuous Delivery keeps the EVE universe online. CCP Games shares its experience and advice on version management and Continuous Delivery EVE Online has hundreds of thousands of subscribers and is among the most successful massively multiplayer online games available. 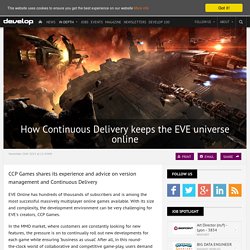 With its size and complexity, the development environment can be very challenging for EVE's creators, CCP Games. In the MMO market, where customers are constantly looking for new features, the pressure is on to continually roll out new developments for each game while ensuring ‘business as usual’. After all, in this round-the-clock world of collaborative and competitive game-play, users demand minimal downtime. One of the methods that CCP uses to meet this demand is Continuous Delivery (CD), which is being adopted by an increasing number of companies, not just in the games industry, but across all organisations with software development needs. Version management is at the heart To address this gap, CCP places version management at the heart of its software development. Docker & Jenkins: Data that Persists. In the last blog post we discussed taking more control of our Jenkins Docker image by wrapping the Cloudbees image with our own Dockerfile. 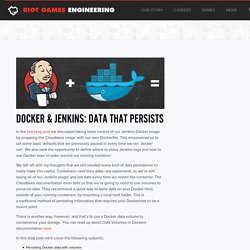 This empowered us to set some basic defaults that we previously passed in every time we ran `docker run`. We also took the opportunity to define where to place Jenkins logs and how to use Docker exec to poke around our running container. Thinking Inside the Container. Containers have taken over the world, and I, for one, welcome our new containerized overlords. 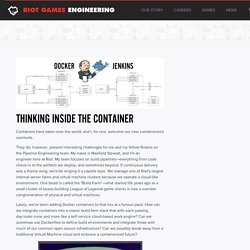 They do, however, present interesting challenges for me and my fellow Rioters on the Pipeline Engineering team. My name is Maxfield Stewart, and I'm an engineer here at Riot. My team focuses on build pipelines—everything from code check-in to the artifacts we deploy, and sometimes beyond. Putting Jenkins in a Docker Container.

When I first started learning about Docker a year ago and exploring its use I had trouble finding great documentation and examples—even today many describe simple use cases that ultimately aren’t production ready. 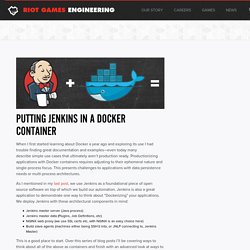 Productionizing applications with Docker containers requires adjusting to their ephemeral nature and single-process focus. This presents challenges to applications with data persistence needs or multi-process architectures. Fast Iteration Tools in the Production of The Talos Principle. David Bernstein's Blog - What Mr. Robot Says About Bugs. Sometimes we act as if bugs just appear in our code on their own, but we all know that’s not true. 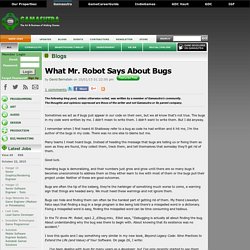 The bugs in my code were written by me. I didn’t mean to write them. I didn’t want to write them. Future of Testing and Automation: The role of the tester in 2020. Last week, the first TestWorks Conf was held in Amsterdam. 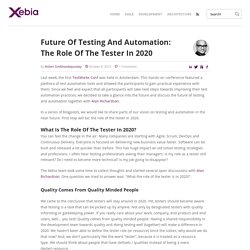 This hands-on conference featured a plethora of test automation tools and allowed the participants to gain practical experience with them. Since we feel and expect that all participants will take next steps towards improving their test automation practices, we decided to take a glance into the future and discuss the future of testing and automation together with Alan Richardson. In a series of blogposts, we would like to share parts of our vision on testing and automation in the near future. First stop will be: the role of the tester in 2020. You can feel the change in the air. The Xebia team took some time to collect thoughts and started several open discussions with Alan Richardson. Quality comes from quality minded people. Game QA & Localisation - Download Center. Unity’s test automation team. Hello everybody, my name is Elvis Alistar and I have been working with Unity for more than 2 years. I am responsible for leading the team of Software Development Engineers in Test (SDET), which is part of Unity’s QA department.

As the job title implies, we are a team of software developers that absolutely love testing. In this post, I would like to let you know why it is so critical for Unity to have a team of expert developers focusing on test automation. The Challenge Unity is a rapidly growing company with more than 450 employees from 50 different nations, working in 27 locations. Unity supports 12 major platforms and a few smaller ones.

Continuous Integration. Is QA a shared responsibility? SCEE's Dave Parkinson discusses the current state of play in game testing QA plays a sometimes forgotten but hugely important role in making sure the games consumers play are near bug-free and run as smooth as possible. As games get bigger and the way developers make them changes, such as early access releases and the regular post-launch updates many titles now receive, the QA process has had to adapt. Rewriting the rules of QA in games. Full Crash Dumps: They’re Just a Few Gigs.

Full Crash Dumps: They’re Just a Few Gigs Part of the programmer job description is to fix crashes. A good rule of thumb is that any bug which can be reproduced can be fixed. The problem, of course, comes when you can’t reproduce the bug. Today I want to address a specific breed of crash – the retail server crash. By retail I mean you’ve passed automated testing, passed the QA team, and have shipped a crash to paying customers. Rad Smyk's Blog - How To Not Lose Money On External QA - And Have The Best Productivity. The following blog post, unless otherwise noted, was written by a member of Gamasutra’s community. Why I Love Our QA’s.