Alpha? Take the Tour: What Is Wolfram 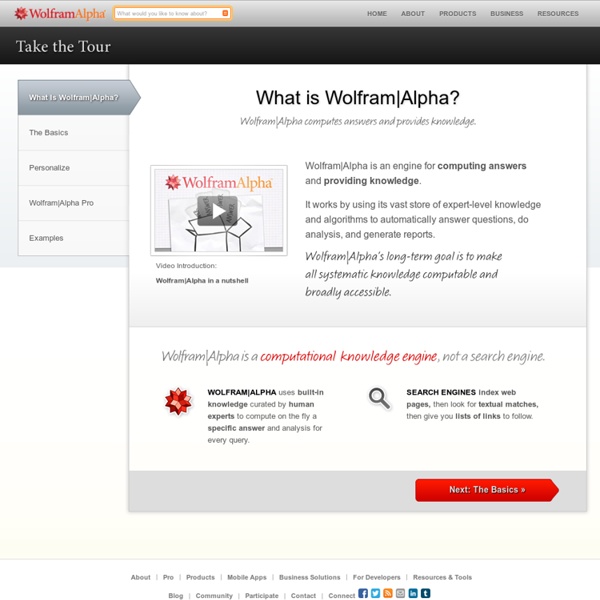 Taking A Step Back And Thinking Critically About Technology I am probably going to take a lot of heat for this post. But maybe that's a good thing. Perhaps more conversation is needed... I remember where I was when I heard the iPad announced. I was sitting in my office when I was still working at a school. I had the live blog from Techcrunch on one screen and Twitter on the other. And I did just that to my first conference. As time went by my iPad went from being a productivity tool to a consumption tool. Sure, I thought, there is a real advantage here for a child to learn with with this tool. This is a trend that continues to grow and grow and grow. No doubt the tablet trend is on the rise and will continue to rise. I was recently reading over some proposals for a project to give grant money to classrooms. There are lots of great programs out there that demonstrate these devices do have a positive impact on the classroom and learning. Look, the iPad here is just an example. Technology exclusively can't change learning.

Free for All: National Academies Press Puts All 4,000 Books Online at No Charge - Wired Campus Today the National Academies Press announced it would offer its entire PDF catalog of books for free, as files that can be downloaded by anyone. The press is the publishing arm of the National Academies of Sciences and Engineering, the Institute of Medicine, and the National Research Council, and publishes books and reports that scientists, educators, and policy makers rely on. Barbara Kline Pope, executive director for the press, said it had previously offered 65 percent of its titles—ones that were narrow in scope—for free. “The 35 percent that we are adding today will reach a wider audience, and we are doing it because it’s central to our mission to get this information to everyone,” she said. Ms. Pope, who had been up all night testing that the downloads worked properly—the Web site was remarkably slow today—said the first new title taken was Surrounded by Science: Learning Science in Informal Environments, which sells in hardcover for $24.95. Return to Top

Panoramio - Photos of the World Wikiversity Supplementing Textbooks with Student Constructed Knowledge Bases We’re just a few weeks removed from a major Apple announcement regarding the release of a new eTextbooks initiative. I’m keenly aware of the significance of the move to eBooks, especially as I have a 13 year old that carries 20 pounds in his backpack to school every day. However important the move from paper to digital textbooks, I'm still left with a taste for more. I have been critical of the ways most schools still rely on text as the primary, almost solitary, medium for exchanging information. iBooks could have included aspects of social reading so "friends" could exchange questions and notes right within the pages of the book. One of the major complaints about "20th century education" was that it centered on content delivery. While the eTextBooks initiative is a wonderful stride forward from our old paper textbooks it’s still essentially a re-constituted content delivery system that wasn’t designed or intended to change the one-way process of educational exchanges. Curation

Where YouTube EDU Went Wrong (and how it might recover) by Higher Ed Live YouTube‘s educational portal, YouTube EDU, entered its third year of operation this past week. In spite of some very optimistic publicity for its initial launch, its development as a teaching-and-learning tool has thus far proven rather lackluster. YouTube has shown little effort in expanding and supporting the site, and few institutions in higher education have made significant academic contributions to it. YouTube.com/edu w as originally intended as an opportunity for colleges and universities around the world to post educational content online for anyone’s free access. Schools of higher education seem partly to blame for their lack of effort to provide high-quality academic content. Where are the contributions from our colleges and universities? Contrast that with schools that lead the way in providing online academic content: 13,442 viewers had checked out videos put up by MIT; 13,671 had clicked on Harvard’s. But Mallory Wood, assistant director of marketing at St.

AireTalk : Llamar gratis ☆Super easy-to-use☆Fast and smooth☆Extra light-weight☆Smart T9 algorithm☆30+ languages☆Directly call/text to someone by swiping left/right☆Various themes and plugins☆Recommended by AppGoVideo.com ( CAUTION: It's dangerous to uninstall/disable stock contacts app, which is required to make emergency calls (911 etc.)! Test calling emergency services firstly, before you start using this app! This is a trial version with 7 days trial period. When the trial period expired, you will be asked to buy PRO version. You can still keep trying if you haven't decided to buy. Help to translate to your language, please visit ▌Useful Skills• Long press the contacts button(at left-bottom corner of dialer view) to quick access favorites• Dial "#" key to perform phone number searching• Dial "*" key to display list of most frequently contacted contacts• Swipe contact item left or right, to send SMS or make a call directly

Enterprise Social Software | Socialtext 360 Tap the experts Far more than just a recommendation engine, Socialtext 360 provides an intuitive interface that displays how similar colleagues are to each other based on a variety of criteria. With a robust view into people across business units and within your organization, the experts in various subjects can be easily discovered and effectively tapped. Socialtext 360 makes it easy to identify the most relevant colleagues in your network to connect and collaborate with. Bring mentorship to life Mentorship fuels innovation, stronger team ties and shows a commitment to your staff that their personal career goals are tied to business success. Foster connections Tighter team bonds not only make for a better work environment, they can increase employee engagement, stimulate new ideas, shift support and training costs and increase efficiencies across the enterprise. Create successful teams

FotoEscalera | Un canal dedicado a la enseñanza de fotografía y videografía de forma gratuita K-12 Mobile Learning About Key: The Geometer's Sketchpad® Named an EdNET's Best "Shining Stars" for 2011 - Key Curriculum Press The Geometer’s Sketchpad® is the world’s leading software for teaching mathematics. Sketchpad® gives students at all levels—from third grade through college—a tangible, visual way to learn mathematics that increases their engagement, understanding, and achievement. Make math more meaningful and memorable using Sketchpad. Elementary students can manipulate dynamic models of fractions, number lines, and geometric patterns. Middle school students can build their readiness for algebra by exploring ratio and proportion, rate of change, and functional relationships through numeric, tabular, and graphical representations. And high school students can use Sketchpad to construct and transform geometric shapes and functions—from linear to trigonometric—promoting deep understanding. Sketchpad is the optimal tool for interactive whiteboards. Click the Try It button above to download the free trial version of Sketchpad, which allows you to preview the software for 20-minute sessions.