Proximity. Proximity is a collaborative effort by Tokyo Dawn Labs and Vladg Sound. 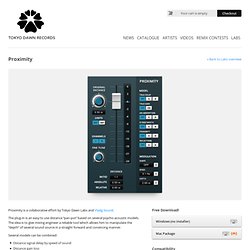 The plug-in is an easy to use distance “pan-pot” based on several psycho-acoustic models. The idea is to give mixing engineer a reliable tool which allows him to manipulate the “depth” of several sound source in a straight forward and convincing manner. Several models can be combined: Distance signal delay by speed of soundDistance gain lossAbsorption of high-frequencies in airStereo width manipulationProximity effect of virtual microphoneDistance based early reflections All models can be turned on and off to taste. Proximity was our candidate for the KVR Developer Challenge 2012 and reached 2nd place in the overall category and 1st place in the mac category! Free Download! Windows (no installer) Mac Package Compatibility. 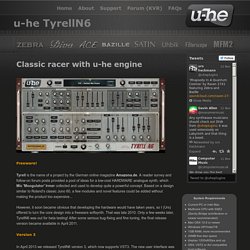 Tyrell is the name of a project by the German online magazine Amazona.de. A reader survey and follow-on forum posts provided a pool of ideas for a low-cost HARDWARE analogue synth, which Mic 'Moogulator' Irmer collected and used to develop quite a powerful concept. Based on a design similar to Roland's classic Juno 60, a few modules and novel features could be added without making the product too expensive... However, it soon became obvious that developing the hardware would have taken years, so I (Urs) offered to turn the core design into a freeware softsynth.

That was late 2010. Version 3 In April 2013 we released TyrellN6 version 3, which now supports VST3. Download TyrellN6 from here: Amazona TyrellN6 V3 (go to page 3 of the German blurb, and scroll down until you see the Mac/PC file links). Key features.

Flux. Audio Damage. Rough Rider is a modern compressor with a bit of "vintage" style bite and a uniquely warm sound. 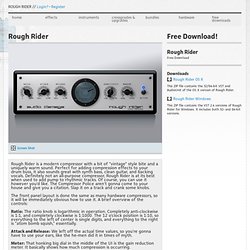 Perfect for adding compression effects to your drum buss, it also sounds great with synth bass, clean guitar, and backing vocals. Definitely not an all-purpose compressor, Rough Rider is at its best when used to add pump to rhythmic tracks. Of course, you can use it however you'd like. The Compressor Police aren't gonna come to your house and give you a citation. Slap it on a track and crank some knobs. The front panel layout is done the same as many hardware compressors, so it will be immediately obvious how to use it.

Ratio: The ratio knob is logarithmic in operation. Attack and Release: We left off the actual time values, so you're gonna have to use your ears, like the he-men did it in times of myth. Meter: That honking big dial in the middle of the UI is the gain reduction meter. Sensitivity: usually called "threshold" now, but we think "sensitivity" always made more sense. Ohm Force. TAL - Togu Audio Line. Commercial Products:VST, AU and Pro-Tools AAX plug-ins for MAC and Windows. 32 and 64 bit hosts supported. 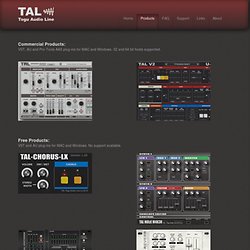 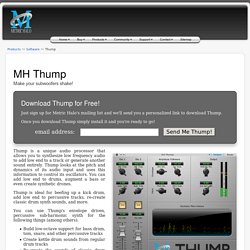 Just sign up for Metric Halo's mailing list and we'll send you a personalized link to download Thump. Once you download Thump simply install it and you're ready to go! Thump is a unique audio processor that allows you to synthesize low frequency audio to add low end to a track or generate another sound entirely. Thump looks at the pitch and dynamics of its audio input and uses this information to control its oscillators. You can add low end to drums, augment a bass or even create synthetic drones. Thump is ideal for beefing up a kick drum, add low end to percussive tracks, re-create classic drum synth sounds, and more. 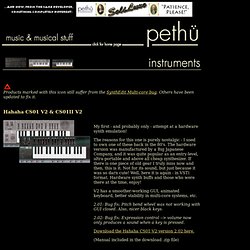 The reasons for this one is purely nostalgic - I used to own one of these back in the 80's. The hardware version was manufactured by a Big Japanese Company, and it was quite popular as an entry-level, ultra-portable and above all cheap synthesizer. If there is one piece of old gear I truly miss now and then, this is it. Not for its sound, but just because it was so darn cute! 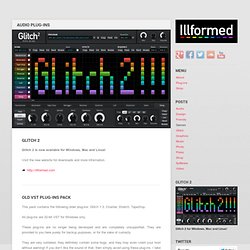