Year-round school in the United States. This article is about extended school years for the general school population. 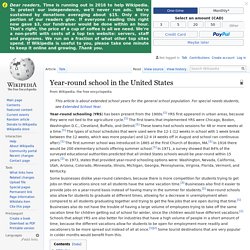 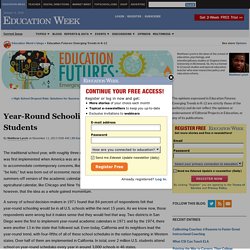 The time off was not implemented to accommodate contemporary concerns, like children needing "down time" to decompress and "be kids," but was born out of economic necessity. In fact, the first schools that went against the summers-off version of the academic calendar were in urban areas that did not revolve around the agricultural calendar, like Chicago and New York, as early as the mid-1800s. It was much later, however, that the idea as a whole gained momentum. Education - Classes the Year Round Pass the Test for Many. ST. 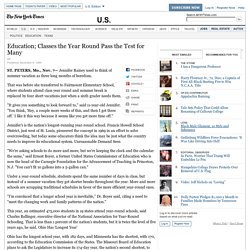 PETERS, Mo., Nov. 7— Jennifer Rainey used to think of summer vacation as three long months of boredom. That was before she transferred to Fairmount Elementary School, where students attend class year round and summer break is replaced by four short vacations just when a sixth grader needs them. ''It gives you something to look forward to,'' said 11-year-old Jennifer. ''You think, 'Hey, a couple more weeks of this, and then I get three off.' I like it this way because it seems like you get more time off.'' Jennifer's is the nation's longest-running year-round school. ''We're asking schools to do more and more, but we're keeping the clock and the calendar the same,'' said Ernest Boyer, a former United States Commissioner of Education who is now the head of the Carnegie Foundation for the Advancement of Teaching in Princeton, N.J.

Under a year-round schedule, students spend the same number of days in class, but instead of a summer vacation they get shorter breaks throughout the year. Year-round school calendar home page. NAYRE - Common Questions. By NAYRE Executive Director Emeritus, Dr. 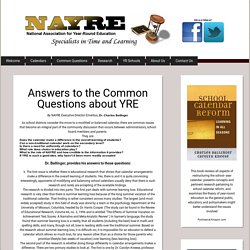 Charles Ballinger As school districts consider the move to a modified or balanced calendar, there are common issues that become an integral part of the community discussion that occurs between administrators, school board members and parents. They are: Does the calendar make a difference in the overall learning of students? Can a non-traditional calendar work on the secondary level? Dr. 1. 2. 3. Year Round Education Definition and Arguments. By Melissa Kelly Updated October 15, 2015. 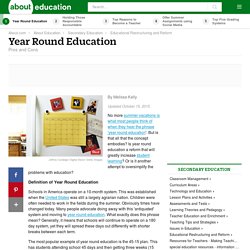 No more summer vacations is what most people think of when they hear the phrase 'year round education'. But is that all that the concept embodies? Is year round education a reform that will greatly increase student learning? Or is it another attempt to oversimplify the problems with education? Definition of Year Round Education Schools in America operate on a 10-month system. The most popular example of year round education is the 45-15 plan. Continue reading below our video The normal breaks (holiday, spring) are still built into this calendar.

Year round education is a very complex topic with many variables that must be considered, not the least of which is the motivation behind a school district's decision to change their current calendar.