Indica vs. Sativa: Understanding The Differences. Indica and sativa are the two main types of cannabis. 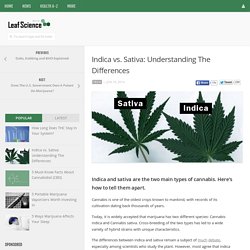 Here’s how to tell them apart. Cannabis is one of the oldest crops known to mankind, with records of its cultivation dating back thousands of years. Today, it is widely accepted that marijuana has two different species: Cannabis indica and Cannabis sativa. Cross-breeding of the two types has led to a wide variety of hybrid strains with unique characteristics. The differences between indica and sativa remain a subject of much debate, especially among scientists who study the plant. Appearance The most accepted way of distinguishing indica versus sativa is by appearance, or what scientists refer to as morphology. 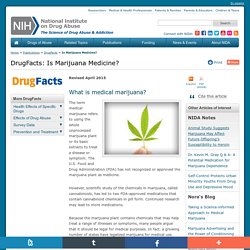 The term medical marijuana refers to using the whole unprocessed marijuana plant or its basic extracts to treat a disease or symptom. The U.S. Food and Drug Administration (FDA) has not recognized or approved the marijuana plant as medicine. Cannabinoid Profile: A Crash Course in THCa - The Leaf Online. In this issue of Cannabinoid Profiles, the properties of THCa are broken down and the therapeutic benefits are explored. 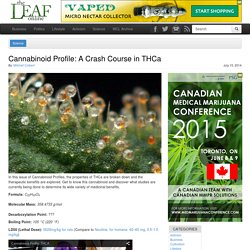 Get to know this cannabinoid and discover what studies are currently being done to determine its wide variety of medicinal benefits. Formula: C22H30O4Molecular Mass: 358.4733 g/molDecarboxylation Point: ??? Boiling Point: 105 °C (220 °F) LD50 (Lethal Dose): 5628mg/kg for rats (Compare to Nicotine, for humans: 40–60 mg, 0.5-1.0 mg/kg) Found in the trichomes, Tetrahydrocannabinolic acid (THCa) is the acidic precursor to THC, which actually exists in only minute quantities in the living plant.

Chile’s Change and South America’s First Medical Grow Harvested. Earlier this month, Chile’s Congressional health committee opened up political debate in the country when it approved a bill to legalize the personal cultivation of up to 6 cannabis plants for recreational and medical use. 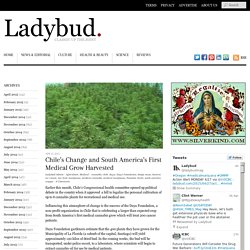 Influencing this atmosphere of change is the success of the Daya Foundation, a non-profit organization in Chile that is celebrating a larger than expected crop from South America’s first medical cannabis grow which will treat 200 cancer patients. Daya Foundation gardeners estimate that the 400 plants they have grown for the Municipality of La Florida (a suburb of the capital, Santiago) will yield approximately 120 kilos of dried bud. In the coming weeks, the bud will be transported, under police escort, to a laboratory, where scientists will begin to extract cannabis oil for use by medical patients. The Daya Foundation made international news when it launched the ambitious program in September. The Daya Foundation grow almost didn’t happen at all. 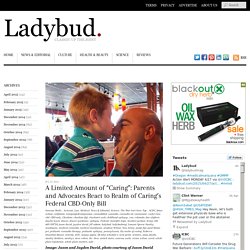 According to yesterday’s press release from RoC, 5 Differences Between CBD and THC. Cannabidiol (CBD) and tetrahydrocannabinol (THC) are the two main ingredients in the marijuana plant.

Both CBD and THC belong to a unique class of compounds known as cannabinoids. While many strains of marijuana are known for having abundant levels of THC, high-CBD strains are less common. But CBD has recently started to draw attention from the medical community, who seem to prefer CBD over THC. Here, we explain the differences between these two compounds. 1) The High THC is probably best known for being the psychoactive ingredient in marijuana. Doctors usually prefer treatments with minimal side effects, which has been a major barrier to the acceptance of medical marijuana. 2) Anxiety THC is known to cause some people to feel anxious or paranoid. 3) Antipsychotic In addition to being non-psychoactive, CBD seems to have antipsychotic properties. 4) Sleep.

Neurophysiological and subjective profile of marijuana with varying concentrations of cannabinoids.(1st study but no effect of CBD cause the dose was administrate by the lab and was much lower % 285. Abstract Background The two main constituents of cannabis, cannabidiol and Δ 9-tetrahydrocannabinol (THC), have opposing effects both pharmacologically and behaviourally when administered in the laboratory. 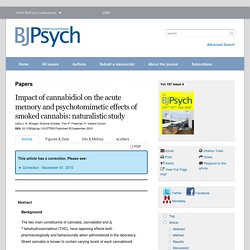 Street cannabis is known to contain varying levels of each cannabinoid. Aims To study how the varying levels of cannabidiol and THC have an impact on the acute effects of the drug in naturalistic settings. Method Cannabis users (n = 134) were tested 7 days apart on measures of memory and psychotomimetic symptoms, once while they were drug free and once while acutely intoxicated by their own chosen smoked cannabis. Results.