Jonathan Haidt: The Psychology of the Political Spectrum. Jonathan Haidt on “Two Incompatible Values at American Universities.” Psychologists Turn Conservatives Into Liberals With One Strange Thought Experiment. Studies have consistently shown that turning liberals into conservatives (at least temporarily) is surprisingly easy. 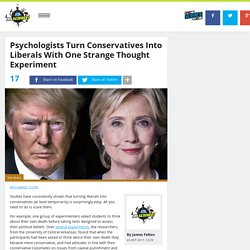 All you need to do is scare them. For example, one group of experimenters asked students to think about their own death before taking tests designed to assess their political beliefs. Over several experiments, the researchers, from the University of Central Arkansas, found that when the participants had been asked to think about their own death they became more conservative, and had attitudes in line with their conservative classmates on issues from capital punishment and abortion, to rights for gay employees. The theory goes that the liberal students became much more socially conservative than the control group (who thought about television) because thinking about their own death made them feel vulnerable. Now researchers have discovered an easy way to do the reverse – turn conservatives into liberals. [H/T: Business Insider] Liberals are terrible at arguing with conservatives. Here’s how they can get better. If you want to argue with people who don’t think like you, you have to figure out how they think. 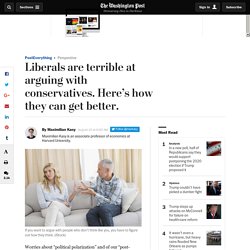 (iStock) Worries about “political polarization” and of our “post-factual era” impeding political debate in our society have become commonplace. Liberals, in particular, are often astonished at the seeming indifference of their opponents toward facts and toward the likely consequences of political decisions. “Donald Trump has been helped by a conservative-media environment in which there is no penalty for being wrong all the time,” Josh Barro wrote at Business Insider back in October; likewise, Mother Jones’s Kevin Drum more recently wondered: “Why do Republicans tell such obvious lies?” A common, though apparently ineffective, response to this frustration is to double down by discussing more facts. When arguing about politics, it is often helpful to construct the best possible version of your opponent’s reasoning — a task admittedly not always made easy by the current administration.

Human Nature. Dicipline, Politics & Corparal Punishment. Easier to Fool then to show a person a fool. Scientists Are Beginning To Figure Out Why Conservatives Are…Conservative. Scientists are using eye-tracking devices to detect automatic response differences between liberals and conservatives.University of Nebraska-Lincoln You could be forgiven for not having browsed yet through the latest issue of the journal Behavioral and Brain Sciences.

If you care about politics, though, you'll find a punchline therein that is pretty extraordinary. Click here to read more from Mooney on the science of why people don't believe in science. Behavioral and Brain Sciences employs a rather unique practice called "Open Peer Commentary": An article of major significance is published, a large number of fellow scholars comment on it, and then the original author responds to all of them.

The approach has many virtues, one of which being that it lets you see where a community of scholars and thinkers stand with respect to a controversial or provocative scientific idea. That's a big deal. The authors go on to speculate that this ultimately reflects an evolutionary imperative. The New Humanism. The depressing psychological theory that explains Washington. Dylan Matthews's "Five conservative reforms millennials should be fighting for" isn't just an admirably intricate piece of trolling. 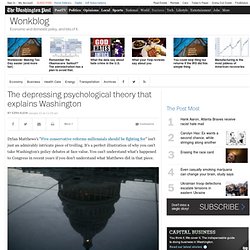 It's a perfect illustration of why you can't take Washington's policy debates at face value. You can't understand what's happened to Congress in recent years if you don't understand what Matthews did in that piece. Objects in politics may be more distorted than they appear. (Andrew Harrer/Bloomberg) A bit of background. "If you’re a Millennial who loves bread lines, prison camps, forced famines, and abject human misery, then you’ll love the latest offering from Rolling Stone," wrote the Federalist's Sean Davis. But the policies Myerson advocates are rather less radical. All of a sudden, conservatives liked the article, and liberals -- well, liberals didn't really like Dylan anymore.