A Georgia sheriff ordered pat-down searches for every student at a public high school. Now they’re suing. (Tyler Nienhouse/Flickr) Students at Worth County High School in Sylvester, Ga., have filed a federal civil rights lawsuit against their country sheriff after he ordered what the complaint describes as a schoolwide drug sweep involving pat-down searches of hundreds of teenagers. 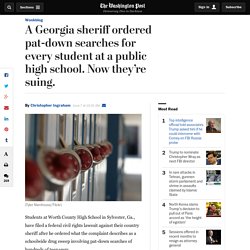 On April 14, Sheriff Jeff Hobby and dozens of deputies came to Worth County High School searching for students in possession of illicit substances. According to the students' legal complaint, they proceeded to go to every classroom and physically search nearly every student present for drugs. The deputies, the lawsuit alleges, used “pat down” searches, with some deputies touching female students’ breasts and male students’ genitalia. Tommy Coleman, a lawyer for the district, corroborated the students' account of the search. Business wonkblog false after3th true Wonkbook newsletter Your daily policy cheat sheet from Wonkblog.

Neither search turned up any illicit drugs, according to Coleman. J.E.' Sheriff Clarke sued for ordering student's harassment who shook his head disapprovingly (with video) Milwaukee’s abusive snowflake and Donald Trump lapdog Sheriff David Clarke continues his Trumponian bonafides with a new lawsuit. 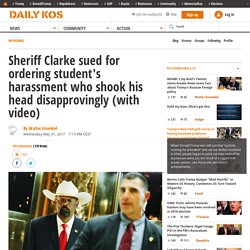 Back in January, Clarke was sitting his snowflake cowboy hat down in first class on a flight from Milwaukee to Dallas, where he was going to be the special guest of Dallas Cowboys owner Jerry Jones. Dan Black, a 24-year-old Wisconsin resident, was passing Clarke while boarding the plane and saw the Wisconsin sheriff sporting all Dallas Cowboy memorabilia.

This made Ned Black shake his head disapprovingly at Clarke. Clarke, being super sensitive about manly stuff, decided to use his power as a sheriff to have the younger man detained and questioned after the flight. Milwaukee Sheriff David Clarke got police to detain passenger who questioned him on flight. An incident on an airplane in which Milwaukee County Sheriff David Clarke had a passenger detained and interviewed after the flight without having committed a crime has raised further concerns about Clarke’s alleged abuses of power, despite possibly being selected for a job with the Department of Homeland Security. 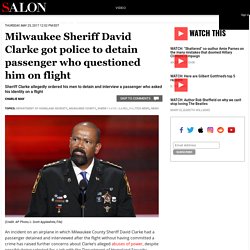 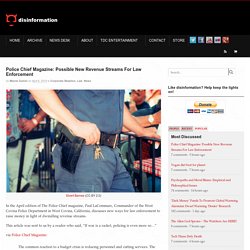 This article was sent to us by a reader who said, “If war is a racket, policing is even more so…” via Police Chief Magazine: The common reaction to a budget crisis is reducing personnel and cutting services. The focus of this article is to provide police agencies with an alternative to personnel and service reductions. This alternative could help the survival of a city and maintain or expand police service through generating new revenue streams as a proactive approach to meet the fiscal crisis of today and the uncertain future of tomorrow. Read the entire piece here. 'I'm Lucky To Be Living': Video Shows Cops Brutally Beating Unarmed Black Man In Michigan. The violent arrest of an African-American motorist by two white police officers in Inkster, Michigan, was caught on video and shows police brutally beating a man who claimed he did nothing wrong. 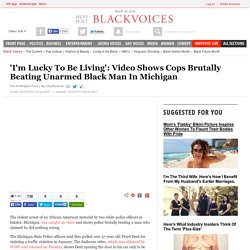 The Michigan State Police officers said they pulled over 57-year-old Floyd Dent for violating a traffic violation in January. The dashcam video, which was obtained by WDIV and released on Tuesday, shows Dent opening the door to his car only to be met by an officer who withdrew his gun and aimed it directly at him. Officers dragged Dent out of the vehicle, forced him face down to the ground and proceeded to place him in a chokehold. “I’m lucky to be living. I think they was trying to kill me, especially when they had choked me,” Dent told WDIV. According to police reports obtained by the TV station, the primary officer served 16 punches to Dent’s head, leaving his face bloody and body bruised.

Dollars, Death and the LAPD. In 2010, two Los Angeles police officers, one Black and one Latino, were patrolling Koreatown when they came upon Steve Washington, an autistic young man. 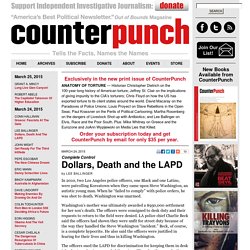 When he “failed to comply” with police orders, he was shot to death. Washington was unarmed. Washington’s mother was ultimately awarded a $950,000 settlement for her son’s death. The officers were consigned to desk duty and their requests to return to the field were denied. Stories Continue To Emerge From Chicago Police Department 'Black Site': Chicagoist. Image credit: Google Maps screengrab Despite vague and predictable non-answers from Chicago Police officials and lackluster “reporting” from the majority of local sources, more disturbing revelations from the CPD's facility on Homan Avenue have emerged. 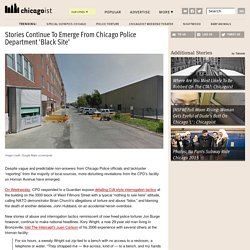 On Wednesday, CPD responded to a Guardian expose detailing CIA style interrogation tactics at the building on the 3300 block of West Fillmore Street with a typical “nothing to see here” attitude, calling NATO demonstrator Brian Church's allegations of torture and abuse “false,” and blaming the death of another detainee, John Hubbard, on an accidental heroin overdose. New stories of abuse and interrogation tactics reminiscent of now freed police torturer Jon Burge however, continue to make national headlines. Kory Wright, a now 29 year old man living in Bronzeville, told The Intercept's Juan Carlson of his 2006 experience with several others at the Homan facility: St. Louis Cops Turned Off Camera to Hide Abuse of Suspect. St. 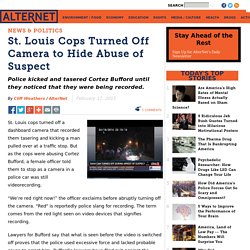 Louis cops turned off a dashboard camera that recorded them tasering and kicking a man pulled over at a traffic stop. But as the cops were abusing Cortez Bufford, a female officer told them to stop as a camera in a police car was still videorecording. “We’re red right now!” The officer exclaims before abruptly turning off the camera. America’s over-policing bombshell: How new data proves “stop & frisk” critics were right all along. People are talking about the police a lot these days. 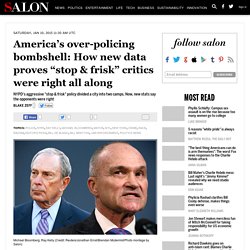 The killing of unarmed residents. The killing of cops. Disputes between New York City mayor Bill de Blasio and rank-and-file officers over issues of respect. And yet, a policing issue that totally consumed and divided New York and the nation in recent years now garners little mention: the NYPD’s stop-and-frisk policy. One big reason, of course, is that the tactic is used much less now. America's Dirtiest Cops: Cash, Cocaine, Corruption on the Texas Border. The temperature was nearing triple digits when Jonathan Treviño strapped on his bulletproof vest, slipped his .40-caliber Glock into his ankle holster and got ready to go to work. 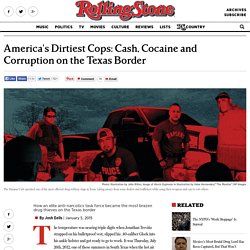 It was Thursday, July 26th, 2012, one of those summers in South Texas when the hot air settles on the Rio Grande Valley like a blanket. The Gulf breeze was already sticky as Treviño climbed into his unmarked Chevy Tahoe and started it up. NY State Trooper threatens driver recording stop: ‘I’ll find a way for the DA’s office to arrest you’ A New York State Trooper, annoyed that a motorist was recording their interactions, threatened to “find a way to arrest” him during a recent traffic stop. In the video recorded by John Houghtaling, the trooper — identified as Officer Rosenblatt — walks up to the car and immediately holds his hand up to block the view of his face from the camera. “Put the phone down,” The trooper tells Houghtaling, who asks the officer “why?” Adding, “Am I not allowed to record, officer?” After asking the trooper for his badge number, Houghtaling asks, “Am I being detained?” Origins of the police. The Five Points district of lower Manhattan, painted by George Catlin in 1827.

New York’s first free Black settlement, Five Points was also a destination for Irish immigrants and a focal point for the stormy collective life of the new working class. Cops were invented to gain control over neighborhoods and populations like this. In England and the United States, the police were invented within the space of just a few decades — roughly from 1825 to 1855.

WATCH: Plainclothes NYPD officer repeatedly strikes teen already subdued by three other cops. A plainclothes New York Police Department officer is being investigated by Internal Affairs after a video in which he rushes up and attacks a teen surfaced, the Daily News reports. In the video, three uniformed officers can be seen subduing the suspect while another uniformed officer supervises when a plainclothes officer in a camouflage jacket rushes toward the suspect and begins to punch him, repeatedly, in the stomach. “Stop it,” yelled bystander Sarah Doneghy, who recorded the arrest and uploaded the video to YouTube. “He’s 12!” WATCH: Arizona cop punches 15-year-old girl in face as mother begs her to stop. In video uploaded to YouTube on Friday, a female Mesa, Arizona police officer can be seen punching and brutalizing a teen girl as her mother begs the officer to stop. According to the Free Thought Project, the 15-year-old girl was a runaway who the police officer was attempting to apprehend.

As a witness filmed, the officer walked up to the girl and punched her, knocking her down. She then put the girl in a chokehold — even after the teen’s mother begged her and a second officer to stop, saying that the girl is asthmatic and has emotional issues. WATCH: Texas sheriff’s deputy sees man filming him, arrests him without reason. A sheriff’s deputy in Harris County, Texas was caught on video arresting a man apparently because the man was videotaping his conversation with another person, the Free Thought Project reported.

The footage shows the deputy, identified as “Hoang,” arriving onto private property and approaching a man sitting down on a chair when he turns and asks the person filming, “Is there a reason why you’re recording this?” The person behind the camera, identified as Michael Gardner, says, “Yes, sir, but I don’t answer questions.” Gardner, who is standing several feet away from the deputy while filming, then identifies himself as a friend of the seated man. Gardner told the Free Thought Project that he was working on the property and had been allowed by the owners to be there. Jon Stewart Has A Question For Rand Paul: 'What The F**k Are You Talking About?'

Jon Stewart On Eric Garner Grand Jury Decision: 'I Honestly Don't Know What To Say' Texas cop allowed to resign one week after video exposes him putting woman in chokehold. Police expert: War on terror has turned our cops into occupying armies — and we’re the enemy. The war on terror has essentially turned police into occupying armies in some American communities, said a police and criminology expert. Thomas Nolan, an associate professor of criminology at Merrimack College and former senior policy analyst with the Department of Homeland Security, said the focus of police work had shifted greatly since he was a Boston police officer in the 1980s and 1990s.

‘You wanna f*cking resist?’: NY sheriff’s deputy caught slapping man on camera. Man who lost testicle won’t face DWI charges because cop destroyed video of groin kick. Charges were dropped against a drunken driving suspect who lost a testicle when an Albuquerque police officer kicked him in the groin, and the law student then filed a lawsuit against the cop. Jeremy Martin, who studies law at the University of New Mexico, was stopped April 25, just days after the U.S.