Science after the pandemic - Bright side of the moonshots. How COVID-19 vaccine efforts could help defeat other diseases. A proposed way of immunizing against malaria uses an RNA-based approach similar to COVID-19 vaccines. 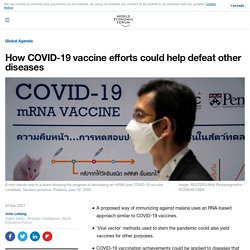 ‘Viral vector’ methods used to stem the pandemic could also yield vaccines for other purposes. COVID-19 vaccination achievements could be applied to diseases that kill millions of people annually. It may have been overlooked amid a spate of upbeat news about COVID-19 vaccine progress, but a report appeared last week on a potential breakthrough in defeating another disease that’s plagued us at least since the days of Hippocrates – and is still killing more than 400,000 people a year. The method of immunizing against malaria detailed in the report would circumvent a protein that inhibits the memory T-cells necessary to make a vaccine effective. The next act for messenger RNA could be bigger than covid vaccines.

There is one application in addition to vaccines, however, where brief exposure to messenger RNA could have effects lasting years, or even a lifetime. 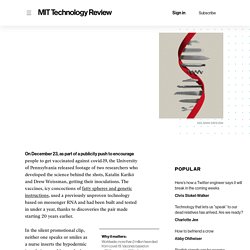 In late 2019, before covid-19, the US National Institutes of Health and the Bill and Melinda Gates Foundation announced they would spend $200 million developing affordable gene therapies for use in sub-Saharan Africa. The top targets: HIV and sickle-cell disease, which are widespread there. Gates and the NIH didn’t say how they would make such cutting-edge treatments cheap and easy to use, but Weissman told me that the plan may depend on using messenger RNA to add instructions for gene-editing tools like CRISPR to a person’s body, making permanent changes to the genome.

Think of mass vaccination campaigns, says Weissman, except with gene editing to correct inherited disease. Right now, gene therapy is complex and expensive. New super-enzyme eats plastic bottles six times faster. A super-enzyme that degrades plastic bottles six times faster than before has been created by scientists and could be used for recycling within a year or two. 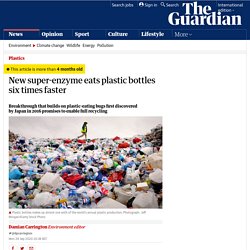 The super-enzyme, derived from bacteria that naturally evolved the ability to eat plastic, enables the full recycling of the bottles. Scientists believe combining it with enzymes that break down cotton could also allow mixed-fabric clothing to be recycled. Chinese gene-edited babies could have unintended consequences, scientists warn. The first gene-edited babies, born this year, could have unintended changes to their genome that those who carried out the pioneering procedure don't even know about, scientists have warned. 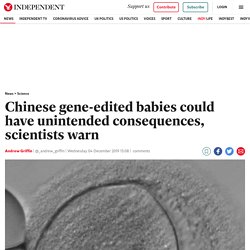 Last year, a Chinese scientist claimed to have created the world's first gene-edited babies. The twin girls, known as Lula and Nana, were the first babies ever to survive the Crispr gene-editing procedure. The controversial Chinese biophysicist behind the research, He Jiankui, claimed that the birth of the children was a success and they had been left naturally resistant to HIV. It means that scientists have been able to check the work and comment on it in public.

Infographic: What CRISPR is curing in 2020. Euronews. It may sound like something out of a futuristic science fiction film, but scientists have managed to engineer spinach plants which are capable of sending emails. 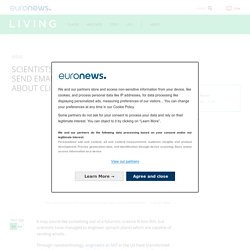 Through nanotechnology, engineers at MIT in the US have transformed spinach into sensors capable of detecting explosive materials. These plants are then able to wirelessly relay this information back to the scientists. When the spinach roots detect the presence of nitroaromatics in groundwater, a compound often found in explosives like landmines, the carbon nanotubes within the plant leaves emit a signal. This signal is then read by an infrared camera, sending an email alert to the scientists.

Why mRNA vaccines could revolutionise medicine. My article for Spectator: Almost 60 years ago, in February 1961, two teams of scientists stumbled on a discovery at the same time. 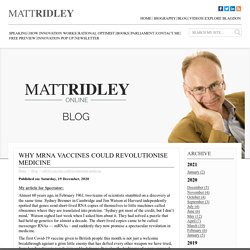 Sydney Brenner in Cambridge and Jim Watson at Harvard independently spotted that genes send short-lived RNA copies of themselves to little machines called ribosomes where they are translated into proteins. ‘Sydney got most of the credit, but I don’t mind,’ Watson sighed last week when I asked him about it. Early drug discovery and the rise of pharmaceutical chemistry. Studies in the field of forensic pharmacology and toxicology would not be complete without some knowledge of the history of drug discovery, the various personalities involved, and the events leading to the development and introduction of new therapeutic agents. 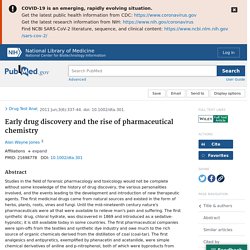 The first medicinal drugs came from natural sources and existed in the form of herbs, plants, roots, vines and fungi. Until the mid-nineteenth century nature's pharmaceuticals were all that were available to relieve man's pain and suffering. The first synthetic drug, chloral hydrate, was discovered in 1869 and introduced as a sedative-hypnotic; it is still available today in some countries. The first pharmaceutical companies were spin-offs from the textiles and synthetic dye industry and owe much to the rich source of organic chemicals derived from the distillation of coal (coal-tar). 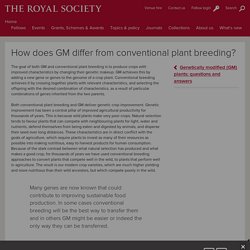 GM achieves this by adding a new gene or genes to the genome of a crop plant. Conventional breeding achieves it by crossing together plants with relevant characteristics, and selecting the offspring with the desired combination of characteristics, as a result of particular combinations of genes inherited from the two parents. Both conventional plant breeding and GM deliver genetic crop improvement. Genetic improvement has been a central pillar of improved agricultural productivity for thousands of years. This is because wild plants make very poor crops. Many genes are now known that could contribute to improving sustainable food production. The Future is Here: Six Of Today’s Most Advanced, Real-Life Cyborgs. Today, people’s bodies are more perfectly melded with technology than we could have imagined mere decades ago. 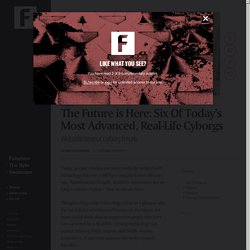 Superhuman strength, dexterity, and senses are no longer science-fiction — they’re already here. Though cutting-edge technology offers us a glimpse into the capabilities of enhanced humans in the future, it’s most useful these days as support for people who have been affected by a disability. Cyborg technology can replace missing limbs, organs, and bodily senses. Sometimes, it can even enhance the body’s typical function. Microbial desalination cell. A microbial desalination cell (MDC) is a biological electrochemical system that implements the use of electro-active bacteria to power desalination of water in situ, resourcing the natural anode and cathode gradient of the electro-active bacteria and thus creating an internal supercapacitor. 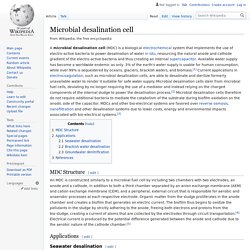 Available water supply has become a worldwide endemic as only .3% of the earth's water supply is usable for human consumption, while over 99% is sequestered by oceans, glaciers, brackish waters, and biomass.[1] Current applications in electrocoagulation, such as microbial desalination cells, are able to desalinate and sterilize formerly unavailable water to render it suitable for safe water supply. MDC Structure[edit] Applications[edit] Seawater desalination[edit] RNA vaccine. Messenger RNA vaccines or mRNA vaccines are medicines that protect the body from germs such as bacteria and viruses. Some mRNA vaccines help the body kill cancer.[1][2] Like all vaccines, mRNA vaccines increase the body's immunity so the patient is less likely to catch an infectious disease.

It can take less time to make an mRNA vaccine for a new disease than to make another kind of vaccine for that disease, months instead of more than a year.[2] How mRNA vaccines work[change | change source] Understanding mRNA COVID-19 Vaccines. Detect coronavirus in just 5 min: Nobel Prize winner develops unique Covid test - SCIENCE News. At a time when scientists across world are racing against time to find an effective vaccine against Covid-19, a team of researchers led by Nobel Prize winner Jennifer Doudna has developed a unique test that can detect the novel coronavirus infection in just 5 minutes. A study published in journal Science says the researchers have found a testing device that will take a reading, process it and show the results in just 5 minutes.

This unique test uses gene-editing technology and a modified mobile phone camera. The test can also detect how much virus is present within a person -- so is the test's sensitivity. The study says that the researchers used CRISPR gene-editing tool to come up with the Covid-19 test. This tool was co-developed by Jennifer A Doudna and won her the Nobel Prize in chemistry this year. What is CRISPR? CRISPR is a technology that can be used to edit genes and, as such, will likely change the world. The essence of CRISPR is simple: it’s a way of finding a specific bit of DNA inside a cell.

After that, the next step in CRISPR gene editing is usually to alter that piece of DNA. However, CRISPR has also been adapted to do other things too, such as turning genes on or off without altering their sequence. There were ways to edit the genomes of some plants and animals before the CRISPR method was unveiled in 2012 but it took years and cost hundreds of thousands of dollars. ‘Medicorobots’ As an Emerging Biopower: How COVID-19 Has Accelerated Artificial Intelligence in A Post Corona-World * Journal of Futures Studies. View PDF Journal of Futures Studies, Dec. 2020, 25(2): 9–16 Arthur Saniotis, Department of Anthropology.

CRISPR-Based COVID-19 Tests Could Work in Just 5 Minutes. Meet TIME's First-Ever Kid of the Year. Antibiotic resistance: cheap diagnostic test could be a saviour. With the world’s attention focused on combating COVID-19, it is easy to forget the other significant threat to public health and the global economy – the rapid rise of antimicrobial resistance (AMR). Yet the problem has not disappeared. Covid-19 Is Accelerating Human Transformation—Let’s Not Waste It. A Gene-Editing Experiment on Human Embryos Went Horribly Wrong. According to a troubling scoop by OneZero, a team of London-based scientists used the popular gene-editing technique CRISPR to genetically modify human embryos — with deeply alarming results. The embryos, none of which were grown past 14 days of maturation, showed a variety of unintended edits to their genes that researchers say could lead to birth defects or even cancer later on in life.

New Artificial Blood Could Be Transfused Into Any Patient. Exclusive: Five couples lined up for CRISPR babies to avoid deafness. A New Genetically Modified Virus Can Combat Prostate Cancer. What Does the Future of Biotechnology Therapies Look Like? Synthetic biology: An emerging research field in China. Biotechnology industry in India – Market Share, Reports, Growth & Scope. Biotechnological Applications in Environmental Management.