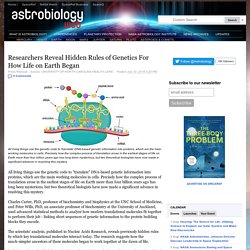 Precisely how the complex process of translation arose in the earliest stages of life on Earth more than four billion years ago has long been mysterious, but two theoretical biologists have now made a significant advance in resolving this mystery. Charles Carter, PhD, professor of biochemistry and biophysics at the UNC School of Medicine, and Peter Wills, PhD, an associate professor of biochemistry at the University of Auckland, used advanced statistical methods to analyze how modern translational molecules fit together to perform their job - linking short sequences of genetic information to the protein building blocks they encode.

The scientists' analysis, published in Nucleic Acids Research, reveals previously hidden rules by which key translational molecules interact today. Ignore Zuckerberg. With skill and imagination we can drive the haters offline. If you’re not on Twitter, don’t start. 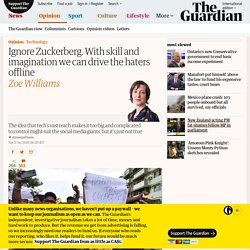 It’s like smoking: highly addictive and no good will come of it. But if you are, log on and put “Elon Musk” in your handle. Twitter has had enough of fraudulent Musk imitators and has decided to put a stop to their merry japes. Your account will be immediately blocked until you’ve proved you’re a real person (which you do via a text to your phone). New – Amazon Linux WorkSpaces. Vísindavefurinn: Er fæðingartíðni barna með Downs að lækka og ef svo er, hverjar eru ástæður þess? Dr. Sanjay Gupta: Forget science (for now); living longer is in your hands. Since I finished medical school 25 years ago, the scientific view of which best determines longevity has fluctuated. 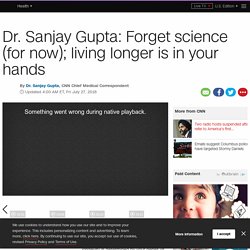 In the mid-1990s, most of the attention was on lifestyle changes: eating the right foods, getting the necessary amount of exercise and not smoking. A decade later, after we mapped the human genome and began identifying longevity genes, my professors increasingly focused their attention on the family tree and our DNA. Genetically modifying future children isn’t just wrong. It would harm all of us. The Nuffield Council on Bioethics has taken what it clearly regards as a brave new step: it has openly endorsed the use of genome editing to engineer the traits of future children and generations. 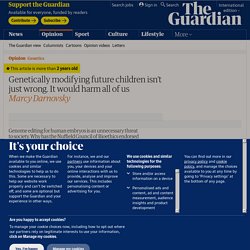 The council’s report, Genome editing and human reproduction: social and ethical issues, asserts that such a move could be “morally permissible” under certain circumstances. In effect, it argues that the creation of genetically modified human beings should proceed after a few bioethics-lite boxes are checked off. The report’s conclusion flies in the face of a widespread global agreement that heritable genetic modification should remain off-limits, a commitment reflected in the laws of many nations, a binding European treaty, several international declarations, and numerous public opinion surveys.

Unfortunately, a number of scientists and bioethicists, especially in the United States, have recently reached conclusions similar to the Nuffield council’s. Styrkja ­starfið. HowToMD5SUM. When one has downloaded an ISO file for installing or trying Ubuntu, it is recommended to test that the file is correct and safe to use. 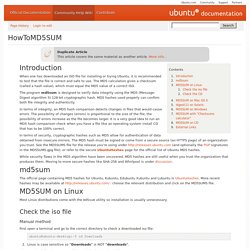 The MD5 calculation gives a checksum (called a hash value), which must equal the MD5 value of a correct ISO. The program md5sum is designed to verify data integrity using the MD5 (Message-Digest algorithm 5) 128-bit cryptographic hash. MD5 hashes used properly can confirm both file integrity and authenticity. In terms of integrity, an MD5 hash comparison detects changes in files that would cause errors. T cell engineering breakthrough sidesteps need for viruses in gene-editing: With faster, cheaper, more precise technique, authors say it's 'off to the races' toward new cell therapies. Uk.businessinsider. The Transiting Exoplanet Survey Satellite (TESS) took this snapshot of the Large Magellanic Cloud (right) and the bright star R Doradus (left) with just a single detector of one of its cameras. 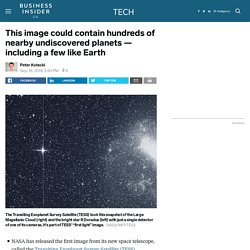 It's part of TESS' “first light” image. NASA/MIT/TESS NASA has released the first image from its new space telescope, called the Transiting Exoplanet Survey Satellite (TESS). TESS could discover thousands of new planets relatively close to Earth. The telescope began its mission on July 25, and it will spend two years scanning 85% of the night sky. Samráðshópur - Akstur utan vega fræðsla. About time: why western philosophy can only teach us so much. One of the great unexplained wonders of human history is that written philosophy first flowered entirely separately in different parts of the globe at more or less the same time. 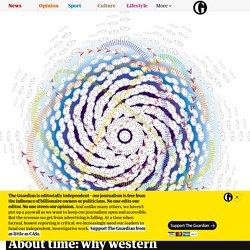 The origins of Indian, Chinese and ancient Greek philosophy, as well as Buddhism, can all be traced back to a period of roughly 300 years, beginning in the 8th century BC. Machine Learning Real-time - Stock Prediction Application using Shiny & R. Soviet Visuals - Accueil. T cell engineering breakthrough sidesteps need for viruses in gene-editing: With faster, cheaper, more precise technique, authors say it's 'off to the races' toward new cell therapies. Common heart drug recalled in 22 countries for possible cancer link. Valsartan is off-patent and is used as a component of other generic medicines. 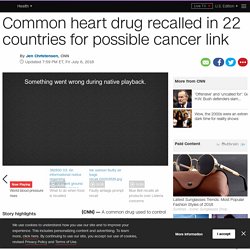 Novartis, the company that originally developed the drug, said Sandoz valsartan and valsartan/HCT film-coated tablets are being recalled since they "do not meet our high quality standards. " Pharmacies in the UK are advised to recall valsartan batches containing medicines made by Dexcel Pharma Ltd and Accord Healthcare. The recall involves about 2,300 batches that were sent to Germany, Norway, Finland, Sweden, Hungary, the Netherlands, Austria, Ireland, Bulgaria, Italy, Spain, Portugal, Belgium, France, Poland, Croatia, Lithuania, Greece, Canada, Bosnia and Herzegovina, Bahrain and Malta. Novartis spokesman Eric Althoff said that products sold in the United States are not affected by this recall. Transiting Exoplanet Survey Satellite. The primary mission objective for TESS is to survey the brightest stars near the Earth for transiting exoplanets over a two-year period. 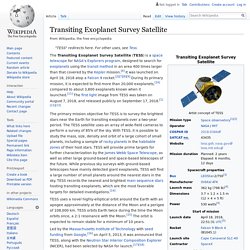 The TESS satellite uses an array of wide-field cameras to perform a survey of 85% of the sky. With TESS, it is possible to study the mass, size, density and orbit of a large cohort of small planets, including a sample of rocky planets in the habitable zones of their host stars. TESS will provide prime targets for further characterization by the James Webb Space Telescope, as well as other large ground-based and space-based telescopes of the future.

While previous sky surveys with ground-based telescopes have mainly detected giant exoplanets, TESS will find a large number of small planets around the nearest stars in the sky. TESS records the nearest and brightest main sequence stars hosting transiting exoplanets, which are the most favorable targets for detailed investigations.[14] I just got a permanent academic job – but I'm not celebrating. On the day I was interviewed for my current (permanent) job, I was homeless, broke and illegally squatting in an empty flat. 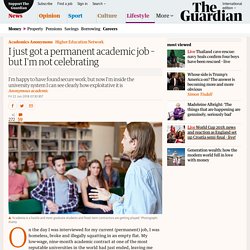 My low-wage, nine-month academic contract at one of the most reputable universities in the world had just ended, leaving me penniless and saddled with thousands of pounds worth of debt. This would be my final interview. After waiting two and a half years on the job market, I received an email the next day offering me the position. I cried tears of relief. Doctors hail world first as woman’s advanced breast cancer is eradicated. A woman with advanced breast cancer which had spread around her body has been completely cleared of the disease by a groundbreaking therapy that harnessed the power of her immune system to fight the tumours. It is the first time that a patient with late-stage breast cancer has been successfully treated by a form of immunotherapy that uses the patient’s own immune cells to find and destroy cancer cells that have formed in the body.

The 49-year-old woman was selected for the radical new therapy after several rounds of routine chemotherapy failed to stop a tumour in her right breast from growing and spreading to her liver and other areas. Doctors who cared for the woman at the US National Cancer Institute in Maryland said woman’s response had been “remarkable”: the therapy wiped out cancer cells so effectively that the patient has now been free of the disease for two years. Next, the doctors extracted immune cells known as tumour infiltrating lymphocytes, or TILs, from the tumour biopsies. Browsing porn in incognito mode isn't nearly as private as you think.

Ctrl-shift-N: the wondrous keyboard shortcut to start an incognito tab in Google Chrome. You hesitantly type in your odious search, and find the porn site which in that moment you feel a magnetizing attraction to. You pore over the endless volumes of pornographic videos. Image after image promises to delight the senses. You continue scrolling and clicking until you find the video that will satisfy that seductive and overpowering urge. Norrænu ríkin hafi forystu um evrópska miðstöð um gervigreind. The Amazon tribe protecting the forest with bows, arrows, GPS and camera traps. With bows, arrows, GPS trackers and camera traps, an indigenous community in northern Brazil is fighting to achieve what the government has long failed to do: halt illegal logging in their corner of the Amazon. The Ka’apor – a tribe of about 2,200 people in Maranhão state – have organised a militia of “forest guardians” who follow a strategy of nature conservation through aggressive confrontation.

Logging trucks and tractors that encroach upon their territory – the 530,000-hectare Alto Turiaçu Indigenous Land – are intercepted and burned. Drivers and chainsaw operators are warned never to return. Those that fail to heed the advice are stripped and beaten. Erase Chronic Back Pain. GMOs Globally. GMO crops are grown around the world by approximately 18 million farmers, most of them in developing countries. In total, more than 75 countries import, grow and/or research GMOs, and in 2016, 26 countries (seven industrial and 19 developing) planted biotech crops. As of 2016, the top five countries growing GMOs in terms of crop area are the United States, Brazil, Argentina, Canada and India. Cultivating GMO crops has provided significant benefits to farmers globally, including increased yield and lower production costs. Importantly, GMOs also help to alleviate poverty for the millions of resource-poor farmers and farm families around the world (equaling approximately 65 million people total).

PG Economics estimates that farmers in developing countries received $3.45 for each dollar invested in genetically engineered crop seeds in 2015. 'Gene map for depression' sparks hopes of new generation of treatments. Scientists have raised hopes for more effective treatments for depression, a condition that affects over 300 million people globally, after mapping out the genetic foundations of the mental disorder in unprecedented detail. In the world’s largest investigation into the impact of DNA on the mental disorder, more than 200 researchers identified 44 gene variants that raise the risk of depression. Heat and Cold Therapies for Arthritis Pain Relief. Two of the simplest, least expensive and most effective methods of pain relief are heat and cold treatments. The future of electronics based on memristive systems. Post-work: the radical idea of a world without jobs. EU member states support near-total neonicotinoids ban. Image copyright Getty Images Member states have voted in favour of an almost complete ban on the use of neonicotinoid insecticides across the EU.

NASA's New Model Shows Which Cities Will Flood When Different Ice Sheets Melt. How did sharing of scientific knowledge become the worst possible crime? Styrkur koltvísýrings eykst á óþekktum hraða. What Cassini learned about Saturn during its death dive - CNN. An AI god will emerge by 2042 and write its own bible. Will you worship it? There's only one conclusion to be made on the Rohingya in Myanmar: It's genocide - CNN.