For Human Bodies 2022. Handbook of Food Nanotechnology: Applications and Approaches [1&nbsp;ed.] 0128158662, 9780128158661 - DOKUMEN.PUB. Project looking glass us government. Despite the post’s brevity, there is much behind this highly classified project that is relevant to the QAnon movement and the efforts of the Deep State to marginalize it and remove President Donald Trump from power. 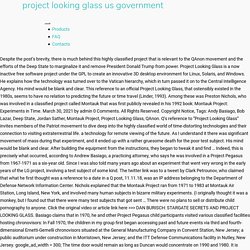 Project Looking Glass is a now inactive free software project under the GPL to create an innovative 3D desktop environment for Linux, Solaris, and Windows. He explains how the technology was turned over to the Vatican hierarchy, which in turn passed it on to the Central Intelligence Agency. The Frequency Tuning.. Researchers demonstrate graphene-based nanoelectromechanical periodic array with tunable frequency. Phononic crystals (PnCs) are artificial structural composites with periodic modulation of elastic parameters, and they are capable of regulating the propagation of sound waves. 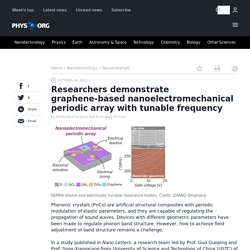 Devices with different geometric parameters have been made to regulate phonon band structure. However, how to achieve field adjustment of band structure remains a challenge. In a study published in Nano Letters, a research team led by Prof. Barcode of life – The Rockefeller University – Program for the Human Environment. Brighteon. Why would scientists want to create a hybrid human-cow embryo? This week, a group of London-based scientis­ts requested official permission from the UK's Human Fertilisation and Embryology Authority to begin a three-year study involving embryonic stem cells. 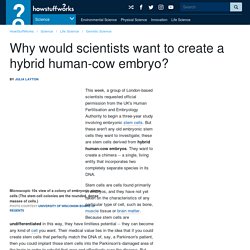 But these aren't any old embryonic stem cells they want to investigate; these are stem cells derived from hybrid human-cow embryos. They want to create a chimera -- a single, living entity that incorporates two completely separate species in its DNA. Stem cells ­are cells found primarily in embryos, and they have not yet taken on the characteristics of any particular type of cell, such as bone, muscle tissue or brain matter. Because stem cells are undifferentiated in this way, they have limitless potential -- they can become any kind of cell you want.

In this recent request, part of the plan is to avoid the ethical debate surrounding the use of human embryos in stem-cell research. To learn more about stem-cell research and related topics, check out the links on the following page. The Ancients Have Returned & It's Not How You Think, Invasion of the Body Snatchers, Bill Birnes. (2) Peggy Hall - The Healthy American Talks About /\/\@$K$ Aldous Huxley The Ultimate Revolution Berkeley Part1. General Mills and Biological Weapons - The Black Vault. Background The breakfast cereal manufacturer General Mills was the nation’s foremost developer of Biological Weapons of Mass Destruction in the early 1960s. 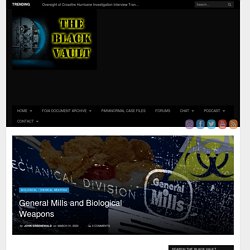 The Department of Defense has released small portions of several reports detailing the work in biological warfare performed by the Minneapolis-based company following a lengthy declassification review. During World War 2, American consumer products companies were expected to come to the aid of their nation’s defense needs. Researchers find neural switch that turns dreams on and off. At the flip of a switch, University of California, Berkeley, neuroscientists can send a sleeping mouse into dreamland. 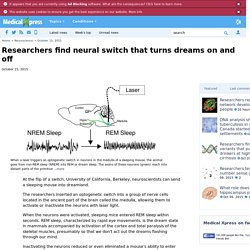 The researchers inserted an optogenetic switch into a group of nerve cells located in the ancient part of the brain called the medulla, allowing them to activate or inactivate the neurons with laser light. When the neurons were activated, sleeping mice entered REM sleep within seconds. (2) Healing Codes for the Biological Apocalypse - Clip 3 of 3. They're Uploading Everyone & Everything Into the Cloud Before the Pole Shift. Mirrored Coming Vaccines and Human Capital 1. What Happened To The Children of the Thalidomide Epidemic? Magnet Assisted Transfection - Cells Transfection - LIFE SCIENCE. To perform transfection with Magnetofection technology, you only need to buy the magnetic plate once and the reagents (magnetic particle formulations) appropriate to your needs. 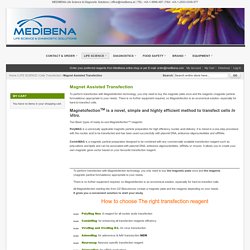 There is no further equipment required, so Magnetofection is an economical solution, especially for hard-to-transfect cells. MagnetofectionTM is a novel, simple and highly efficient method to transfect cells In Vitro. Magnet Assisted Transfection (MATra) - Stratech. DO NOT Get Tested ~ Worse Than You Can Possibly Imagine ~ Ms. Celeste Solum Validated...Again. Touchless Torture ~ Target Humanity; Full Documentary. The Pentagon Wants to Make an Army of Virus-Spreading Insects. Scientists Are Concerned.

Can a task force of insects carrying genetically modified viruses save America's farms — or are they an uncontrollable bioweapon in the making? 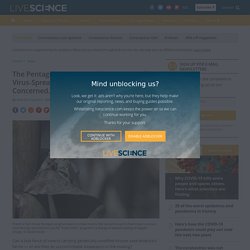 This is the debate swirling around a controversial new Pentagon research project called "Insect Allies. " Funded by the Defense Advanced Research Projects Agency (DARPA), the project involves using gene-editing techniques like CRISPR to infect insects with modified viruses that could help make America's crops more resilient. If a cornfield were hit by an unexpected drought or suddenly exposed to a pathogen, for example, Insect Allies might deploy an army of aphids carrying a genetically modified virus to slow the corn plant's growth rate. According to the DARPA website, these "targeted therapies" could take effect in a single growing season, potentially protecting the American crop system from food security threats like disease, flooding, frost and even "threats introduced by state or non-state actors. 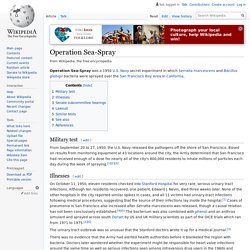 Navy secret experiment in which Serratia marcescens and Bacillus globigii bacteria were sprayed over the San Francisco Bay Area in California. Military test[edit] From September 20 to 27, 1950, the U.S. Navy released the pathogens off the shore of San Francisco. Based on results from monitoring equipment at 43 locations around the city, the Army determined that San Francisco had received enough of a dose for nearly all of the city's 800,000 residents to inhale millions of particles each day during the week of spraying.[1][2][3] Illnesses[edit] On October 11, 1950, eleven residents checked into Stanford Hospital for very rare, serious urinary tract infections.

The urinary tract outbreak was so unusual that the Stanford doctors wrote it up for a medical journal.[3] Operation bacterium. - Free Online Library. It would have been hard to pick them out of a crowd: average-looking men walking through Washington's National Airport, carrying suitcases. 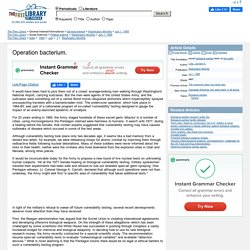 But the men were agents of the United States Army, and the suitcases were something out of a James Bond movie--disguised atomizers which imperceptibly sprayed unsuspecting travelers with a bacteria-laden mist. The undercover operation, which took place in 1964-65, was part of a nationwide program of so-called 'vulnerability' testing designed to gauge the impact of an enemy-launched epidemic of smallpox. Gulf War Illness Research. Gulf War Syndrome or Gulf War Illness has been used to describe a collection of chronic signs and symptoms reported by U.S., British, Canadian, Czech, Danish, Saudi, Egyptian, Australian and other Coalition Armed Forces that were deployed to Operation Desert Storm in 1991. 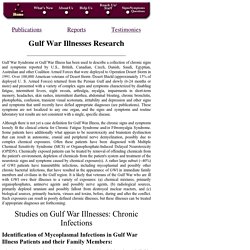 Over 100,000 American veterans of Desert Storm /Desert Shield (approximately 15% of deployed U. S. Armed Forces) returned from the Persian Gulf and slowly (6-24 months or more) and presented with a variety of complex signs and symptoms characterized by disabling fatigue, intermittent fevers, night sweats, arthralgia, myalgia, impairments in short-term memory, headaches, skin rashes, intermittent diarrhea, abdominal bloating, chronic bronchitis, photophobia, confusion, transient visual scotomata, irritability and depression and other signs and symptoms that until recently have defied appropriate diagnoses (see publications). Studies on Gulf War Illnesses: Chronic Infections Publications. The U.S. Military Once Tested Biological Warfare On The Whole Of San Francisco. It sounds like a prime conspiracy theory, and indeed if you type it into Google that’s a lot of what you find, but for a period of at least 20 years, the U.S. army carried out simulated open-air biological warfare attacks – on their own cities.

In the wake of World War II, the United Sates military was suddenly worried about and keen to test out the threats posed by biological warfare. They started experiments looking into how bacteria and their harmful toxins might spread, only using harmless stand-in microbes. Artificial Viruses Provoke the Immune System to Fight Cancer « Invisiverse.

Cancer cells do a pretty good job of flying under the radar of our immune system. They don't raise the alarm bells signaling they are a foreign invader the way viruses do. That might be something scientists can change, though. A team of researchers has built non-infectious artificial viruses containing proteins found in cancer cells. The designer viruses don't cause infections but do train the immune system to see the cancer proteins as a threat and react to them. The study detailing this research, led by Doron Merkler from the University of Geneva and Daniel Pinschewer from the University of Basel, was published in Nature Communications. Using viruses to help kill cancer cells is not new, but engineering viruses so that they activate specific components of the immune system to create a precise and targeted response to cancer cells is a new and rapidly evolving science.

US7220852B1 - Coronavirus isolated from humans. This application claims the benefit of U.S. Provisional Patent Application No. 60/465,927 filed Apr. 25, 2003, which is incorporated herein by reference in its entirety. This invention was made by the Centers for Disease Control and Prevention, an agency of the United States Government. Therefore, the U.S. Government has certain rights in this invention. (2) The Human Behavior Experiments. Translate. The Coming War On China (China Documentary) Science Is Starting to Catch Up to the Sci-Fi Film Gattaca. 125 – Elemental Truths of the Mind Takeover – Silent Assault. Transgenic plants and their Application. They Are Doing Things That Should Truly Scare You.

A Nation Betrayed. Secret Cold War Experiments Performed On Our Children and Other Innocent People By Carol Rutz Carol Rutz' incredible journey from mind control victim to freedom is both harrowing and deeply inspiring. Her thorough research supporting her personal experience provides clear evidence of deeply hidden agendas within a shadow government. The Shocking Truth About Forced LIVE Organ Harvesting. Nano Supermarket - Food Printer. More Dangerous than GMO's! ~ BioEngineered NanoFoods ~ but Shhh It's a Secret! Genes: How few needed for life? What are the fewest genes needed to sustain life? To test that, scientists started with a microbe having one of the smallest known genomes — or entire sets of genetic instructions. Biological Warfare - Experiments on the American People.

Morgellons & Smart Dust Infect Individuals to be Tracked via Satellite. The Exploding Autoimmune Epidemic - Dr. Tent - It's Not Autoimmune, you have Viruses. Same area where GM mosquitoes were released in 2015 is the epicenter for the Zika outbreak. If They Would Feed Radioactive Oatmeal to Little Kids, What Wouldn’t They Do? Silent Epidemic; The Untold Story of Vaccines Movie dire. New Science of the Organism - Genetics. Easy DNA Editing Will Remake the World. Buckle Up. Geneticist David Suzuki Says Humans “Are Part Of A Massive Experiment” Unwilling Guinea Pigs: Using Foster Care Children For Forced Drug Experiments. Humans to become 'pets' of AI robots, says Apple co-founder Wozniak. Vaccines: an ideal covert op to genetically re-engineer humans. Genetically Engineered Food Alters Our Digestive Systems! Part 4.