How the pandemic could speed up an 'urban flight' from Silicon Valley - Business Insider. Companies embrace emerging tech in return-to-office prep. U.S. companies are preparing to welcome employees back to their offices, three months after the coronavirus pandemic disrupted corporate operations worldwide. 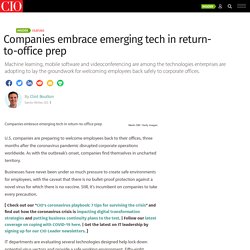 As with the outbreak's onset, companies find themselves in uncharted territory. Businesses have never been under so much pressure to create safe environments for employees, with the caveat that there is no bullet-proof protection against a novel virus for which there is no vaccine. Still, it's incumbent on companies to take every precaution. IT departments are evaluating several technologies designed help lock down potential virus vectors and provide a safe working environment. Fifty-eight percent of 200 IT leaders plan to invest in smart personal hygiene devices, such as connected hand sanitizer stations, while 36 percent plan to invest in contactless sensors, according to a poll Insight Enterprises conducted in May. Black Lives Matter protests: Why are statues so powerful? - BBC Culture. Reimagining the Office by Carlo Ratti.

The COVID-19 crisis seems to be accelerating a shift toward remote work. 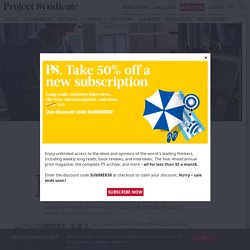 But, rather than welcoming the death of the office, companies should be engineering its rebirth, in a form that strengthens its greatest asset: the ability to foster weak social bonds. BOSTON – Last month, Twitter CEO Jack Dorsey announced that the company would allow its employees, currently working from home in accordance with social-distancing protocols, to stay there for good. Several other big businesses – from Facebook to the French automaker PSA – have followed suit with plans to keep far more employees at home after the COVID-19 crisis ends. Will the office be yet another casualty of the pandemic? In a sense, the death of the office has been a long time coming.

During the dot-com boom of the late 1990s, the rise of Internet-based companies made that future seem closer than ever. It may seem like we are reaching this point. The problem runs deeper than time lags or toddler interruptions. As the pandemic drags on, when can we get back to work? Along with widespread illness and death, the COVID-19 pandemic is also causing massive economic disruption. 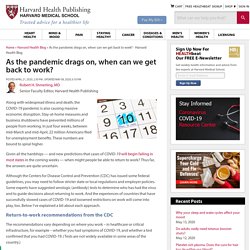 Stay-at-home measures and business shutdowns have prevented millions of people from working. In just four weeks, between mid-March and mid-April, 22 million Americans filed for unemployment benefits. Why many employees are hoping to work from home even after the pandemic is over. Like millions of Americans, Laura Hamill, chief people officer and chief science officer at software company Limeade, has been forced to work from home since early March in an effort to stop the spread of COVID-19. 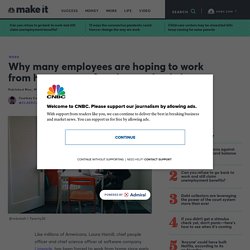 Though today’s forced remote culture has been an adjustment for many, the mom of two teenagers says she looks forward to the possibility of working from home more often even after the pandemic subsides. “To me it sort of takes the edge off of the second shift,” she tells CNBC Make It. “I can start the dishwasher in the middle of the day or I can put out the chicken to cook for a later meal.” She adds that for her, working remotely has been a huge advantage as a parent. We have begun the dreaded third quarter of isolation, when — yes — things get weird - Hack - triple j. In studies of people isolated in submarines, space stations or polar bunkers, researchers have found there appears to be an inflection point where the frustration and hardship of being cooped up inside gets suddenly harder to bear. 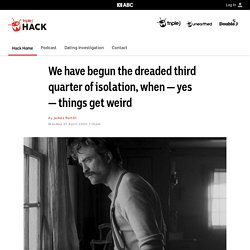 According to the clinical psychologist who assesses the mental health of Australians in Antarctica, we're entering this phase now. Dr Kimberley Norris, an authority on confinement and reintegration at University of Tasmania, told Hack that Australians have broadly been through two periods of isolation: an initial point where there was panic buying and confusion, and then a "honeymoon period" when it felt novel and different to stay at home. "For a little while people were saying how they were loving working in pajamas, and not having to battle morning traffic," she said. That phase — which we can call the sourdough starter moment, or the time when we all downloaded Houseparty — is passing. Sheryl Sandberg: Women are treated unequally. Covid-19 is making it worse.

What the future of work will look like (opinion) Business is not running as usual — that much is certain. 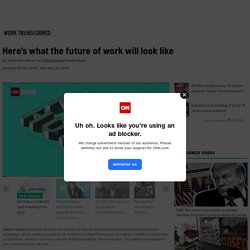 Research from the Society for Human Resource Management (SHRM) found 71% of employers are struggling to adjust to remote work, 65% say maintaining employee morale has been a challenge, and more than a third are facing difficulties with company culture. While this paints a grim picture, it also presents an opportunity to reshape and reinvent the workplace for a post-Covid-19 reality. The challenge is: How will we shape the workplace into something new without destroying components of its past that are worth keeping?

For one, remote work will become a much more widely recognized alternative to location-based work. In fact, 64% of employees are already teleworking most of the time, according to a study from SHRM and Oxford Economics. Antibody tests could lead to job discrimination and workers playing 'Russian roulette' The hope is that people who have been infected with the virus may have developed enough antibodies to make them immune to the virus and their return to work safe, though the science around this is far from settled. 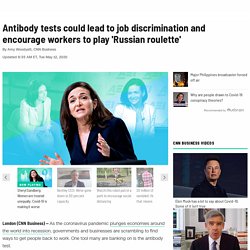 Some governments have even mulled issuing "immunity passports" or certificates for those who test positive. But experts warn that going down this route could create new problems, including discrimination in workplaces, or people deliberately trying to get infected so they can return to their jobs sooner, "playing Russian roulette" with their lives, as one doctor put it. "This might include not permitting those testing Antibody Negative to return to work, or only taking on new staff with Antibody Positive test results," the brief reads.