CGI model Lil Miquela has broken up with her human boyfriend – yes, really. Why the idea of ‘care robots’ could be bad news for the elderly. The idea that technology and the digital revolution will transform our lives and be wholly positive is a familiar trope. 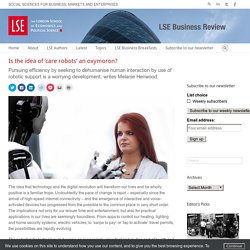 Undoubtedly the pace of change is rapid – especially since the arrival of high-speed internet connectivity – and the emergence of interactive and voice-activated devices has progressed from the possible to the common place in very short order. The implications not only for our leisure time and entertainment, but also for practical applications in our lives are seemingly boundless. From apps to control our heating, lighting and home security systems; electric vehicles, to ‘swipe to pay’ or ‘tap to activate’ travel permits, the possibilities are rapidly evolving. The potential for technology to become an increasingly important and routine part of health and care applications is also evident. Robotics are already a feature of complex and sophisticated keyhole surgery, operated by a surgeon via a computer console, and likely to become increasingly common.

Would You Let a Robot Take Care of Your Mother? After Constance Gemson moved her mother to an assisted living facility, the 92-year-old became more confused, lonely and inarticulate. 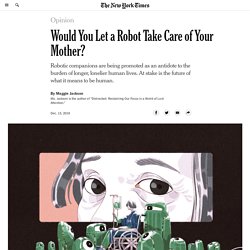 Two full-time private aides, kind and attentive as they were, couldn’t possibly meet all their patient’s needs for connection. So on a visit one day, Ms. Human-Robot Interaction by Christoph Bartneck. Why We Should Teach Kids to Call the Robot ‘It’ Why SoftBank's Pepper could become the iPhone of robots. It can’t cook or clean or do laundry, but SoftBank’s Pepper could become the first breakout humanoid consumer robot and the vanguard of an era of mechanized, cloud-connected assistants. 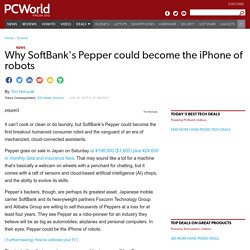 Pepper goes on sale in Japan on Saturday at ¥198,000 ($1,600) plus ¥24,600 in monthly data and insurance fees. That may sound like a lot for a machine that’s basically a webcam on wheels with a penchant for chatting, but it comes with a raft of sensors and cloud-based artificial intelligence (AI) chops, and the ability to evolve its skills. Pepper’s backers, though, are perhaps its greatest asset. Japanese mobile carrier SoftBank and its heavyweight partners Foxconn Technology Group and Alibaba Group are willing to sell thousands of Peppers at a loss for at least four years.

Pizza Hut hires Pepper the robot in Singapore. For two weekends, Pizza Hut customers at an outlet in Singapore can talk to an adorable robot called Pepper to get their pizzas. 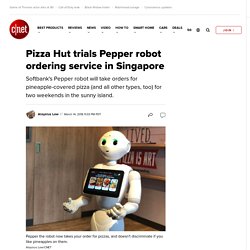 Users who find ordering from human servers mundane will be able to chat with Softbank Robotics' Pepper robot, who will be on duty at the outlet in Punggol, a suburb in the island state. The trial is a result of a partnership by Mastercard, Softbank and Pizza Hut. To do so, a user will need to download the Pizza Hut app, sign in with Mastercard's Masterpass, and then connect to the robot via a four-digit PIN. If this sounds tedious, well, it gets worse. From the demo I saw, Pepper didn't quite seem capable of processing natural language, so orders had to be made step by step. Clicker Training For Humans : NPR.

GordonBreazealEngel HRI 2015 revision ACM letter. CehaEtal CHI2019 Curiosity Expression. Robots for Kids: Designing Social Machines That Support Children's Learning. Japan BrandVoice: A Machine That Does Nothing? Cuddly LOVOT May Be The Most Innovative Japanese Robot Yet. Japan has been at the forefront of robotics technologies for decades. 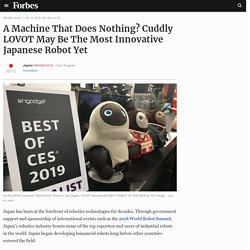 Through government support and sponsorship of international events such as the 2018 World Robot Summit, Japan’s robotics industry boasts some of the top exporters and users of industrial robots in the world. Japan began developing humanoid robots long before other countries entered the field. But one unique aspect of robots in Japan is how they are seen as viable partners and friends for human beings. One recently launched robot that perfectly embodies that aspiration is LOVOT, a pint-sized machine whose only function is to spread love. Created by Tokyo startup GROOVE X, LOVOT is a remarkably lifelike and highly sophisticated mobile robot that can navigate its environment, recognize people and demand hugs.

Lovot is the first robot I can see myself getting attached to. It was love at first sight, the same way you know you’ll love a dog the first time you meet one because, well, it’s a dog. 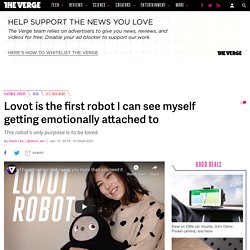 I had heard about the Lovot companion robot before I saw it in person at CES this week, so I knew that its functions were minimal, and the typical reasons to be skeptical of robots that overpromise to make your life easier didn’t apply here. Unlike traditional robots which aim to provide useful services, Lovot is the opposite. Cultivating Curiosity with Robotics Play - Teaching Times.

The Art of Playful Education Speak to any health visitor, nursery or early years teacher, and they will speak effulgently about the importance of play in education. 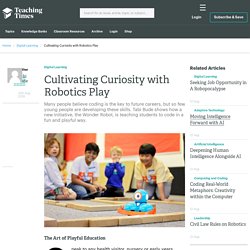 In the home, role-playing toys are encouraged, not just because it’s fun to copy mum and dad, but because they stimulate mental and emotional growth. In nursery classrooms, play shops are set up to build vocabulary and numeracy. Stories are read to increase observation and concentration. Unstructured play is considered as valuable as teacher-led activities for building social and communication skills, as well as physical strength. It was Piaget (1962) who first explored the link between cognitive development and play.2 It was his belief that play remains a vital learning tool into maturity.

Teaching Tech Through Play There isn’t a teacher—or parent—who hasn’t noticed the difference between the responses generated in children by theory and practical work. Wonder Workshop’s Dash The Benefits of Learning Through Play Notes: Robots that teach autistic kids social skills could help them develop. Prediction: Sex Robots Are The Most Disruptive Technology We Didn't See Coming. Loveable Just By Being There. Behind the Development of LOVOT, a Robot Designed to Make People Happy. A robot that is not exactly useful,but whose mere presence makes people happy. 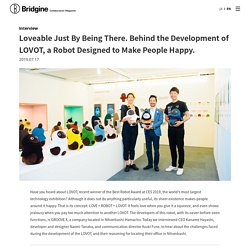 Birds, bees and bytes: How tech is changing sex. Could this be the answer to childcare in the future? - BBC Future. Will we ever have robot carers? - BBC Future. Films like Robot and Frank and I, Robot, as well as animated television shows like The Jetsons, have portrayed a future where robotic servants undertake household chores, allowing families to spend more time together and for elderly people to remain independent for longer. 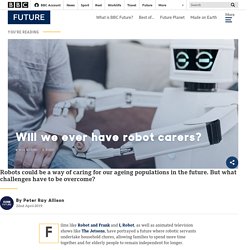 A future of robotic carers is closer than we may realise. Robotic vacuum cleaners and lawn mowers are already available while there has been a massive uptake of assistive technologies for elder care in Japan. Middlesex University’s robot Pepper recently appeared before a parliamentary select committee in the UK to answers questions about the role of robots in education. What we can learn about robots from Japan - BBC Future. When some engineers moved from making functional, industrial robots to humanoid robots that interacted with people, Japan’s particular history likely coloured how they were perceived. 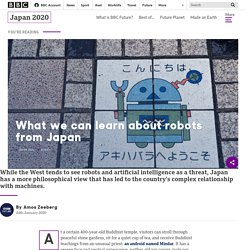 The healing effects of a White 'Seal' Why We Should Teach Kids to Call the Robot ‘It’ Intuition Robotics Raises $36M Series B. On the Novelty Effect in Human-Robot Interaction. Canadian Journal on Aging / La Revue canadienne du vieillissement. Crossref Citations This article has been cited by the following publications. The dawn of social robots. AI will transform religion with robot priests like this one.