Has Berlusconi Finally Run Out of Political Lives? Alessandro Bianchi/Reuters Silvio Berlusconi after his supporters held a rally in August to protest his conviction on tax fraud. 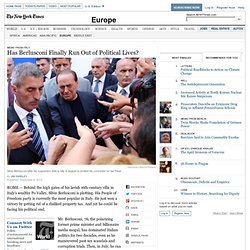 Mr. Berlusconi, 76, the polarizing former prime minister and billionaire media mogul, has dominated Italian politics for two decades, even as he maneuvered past sex scandals and corruption trials. Then, in July, he ran out of maneuvering room: Italy’s highest court upheld a prison term against him for tax fraud. On Monday, a parliamentary commission will debate whether to strip him of his Senate seat. And that has thrown Italian politics into a state of turmoil that threatens the survival of the country’s fragile coalition government while also posing risks to the tentative economic recovery under way in Europe. The Italian Exodus - Adriano Farano. Exit from comment view mode. 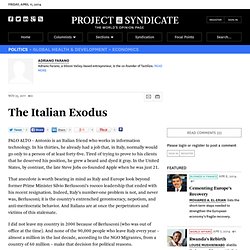 Click to hide this space PALO ALTO – Antonio is an Italian friend who works in information technology. Can Italy Change? by Tim Parks. This is the fifth in an NYRblog series about the fate of democracy in different parts of the world. 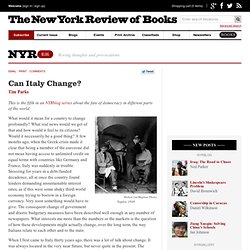 What would it mean for a country to change profoundly? What real news would we get of that and how would it feel to its citizens? Would it necessarily be a good thing? A few months ago, when the Greek crisis made it clear that being a member of the eurozone did not mean having access to unlimited credit on equal terms with countries like Germany and France, Italy was suddenly in trouble. Snoozing for years in a debt-funded decadence, all at once the country found lenders demanding unsustainable interest rates, as if this were some shaky third-world economy trying to borrow in a foreign currency. Mario Monti and Italy's Generational Crisis.

Italian Prime Minister Mario Monti returned home from a successful visit to the United States over the weekend, having won the praise of U.S. 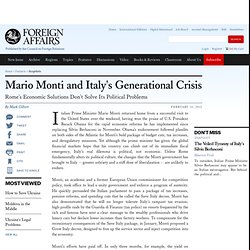 President Barack Obama for the rapid economic reforms he has implemented since replacing Silvio Berlusconi in November. Obama’s endorsement followed plaudits on both sides of the Atlantic for Monti’s bold package of budget cuts, tax increases, and deregulatory measures. Yet although the prime minister has given the global financial markets hope that his country can climb out of its immediate fiscal emergency, Italy’s real dilemma is political, not economic. Unless Rome fundamentally alters its political culture, the changes that the Monti government has brought to Italy -- greater sobriety and a stiff dose of liberalization -- are unlikely to endure. The tune of the future - Slavenka Drakulic Italy: old Europe, new Europe, changing Europe. Venice versus Lampedusa: travelling around Italy, Slavenka Drakulic observes one kind of Europe being replaced by another. 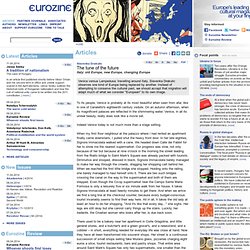 Instead of attempting to conserve the cultural past, we should accept that migration will adapt much of what we consider "European" to its own image. Italy's Labor Law Crisis. About the first thing you learned on arrival in Italy is that it is virtually impossible for a worker to get fired. 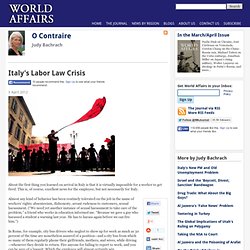 This is, of course, excellent news for the employee, but not necessarily for Italy. Almost any kind of behavior has been routinely tolerated on the job in the name of workers’ rights: absenteeism, dishonesty, arrant rudeness to customers, sexual harassment. (“We need yet another instance of sexual harassment to take care of the problem,” a friend who works in education informed me. “Because we gave a guy who harassed a student a warning last year. He has to harass again before we can fire him.”) Euro Lies and Italy's Crisis. The Veiled Tyranny of Italy's Silvio Berlusconi. Italy’s elections, austerity, and the European Social Model. The shock results in Italy’s local elections have been variously dismissed by all major political parties – which is understandable, since the results for all of them ranged from bad to terrible. 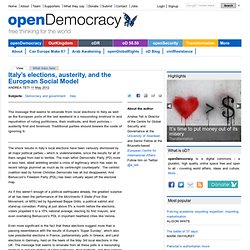 The main leftist Democratic Party (PD) more or less held, albeit wobbling amidst a crisis of legitimacy which has seen its recent ratings plummet as much as its centre-right counterparts’. The centrist coalition lead by former Christian Democrats has all but disappeared. And Berlusconi’s Freedom Party (PDL) has been virtually wiped off the electoral map. As if this weren’t enough of a political earthquake already, the greatest surprise of all has been the performance of the MoVimento 5 Stelle (Five Star Movement, or M5S) led by figurehead Beppe Grillo, a political satirist and stand-up comedian. Is Berlusconi’s star waning? Local elections are easy to dismiss as the place of protest votes and local issues, and no one expects such dire results to be replicated exactly in a general election. "Mario Monti’s Nordic Dream" by Fabrizio Tassinari. Exit from comment view mode. 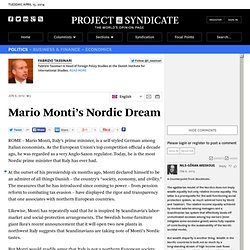 Click to hide this space ROME – Mario Monti, Italy’s prime minister, is a self-styled German among Italian economists. As the European Union’s top competition official a decade ago, he was regarded as a very Anglo-Saxon regulator. Today, he is the most Nordic prime minister that Italy has ever had. At the outset of his premiership six months ago, Monti declared himself to be an admirer of all things Danish – the country’s “society, economy, and civility.” Debt Most Deadly: Recession and Austerity Fuel Suicide in Italy.