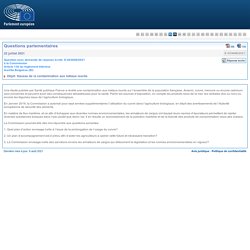 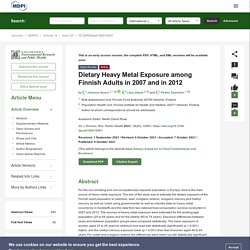 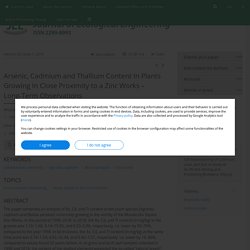 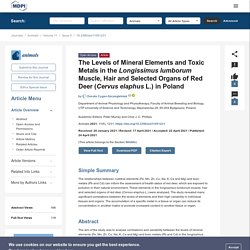 The levels of mineral elements were measured using atomic absorption spectroscopy (F-AAS). The levels of Pb and Cd were analysed by means of electrothermal atomic absorption spectroscopy (ET-AAS). Of all analysed microelements, the highest concentration (in g·kg−1 of dry weight) was found for Fe in the liver. Considering all macroelements, the highest level was found for K in the longissimus lumborum muscle. Particularly remarkable was the high level of Pb in the muscle and hair of red deer.

This is an open access article distributed under the Creative Commons Attribution License which permits unrestricted use, distribution, and reproduction in any medium, provided the original work is properly cited. INT. J. ENVIRON. RES. PUBLIC HEALTH 22/10/19 Potentially Harmful Element Concentrations in the Vegetables Cultivated on Arable Soils, with Human Health-Risk Implications. Potentially harmful elements (PHEs) were investigated in eight groups of vegetables cultivated in southern Poland and the relevant health-risk implications were assessed. 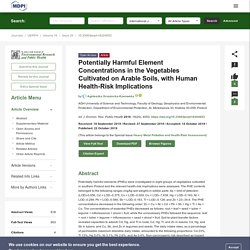 FOOD SAFETY NEWS 17/05/20 Finland assesses heavy metals risk from foods. Some adults in Finland are exposed to amounts of heavy metals in food that could pose a risk to their health, according to an assessment. 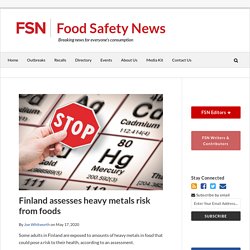 The Finnish Food Authority (Ruokavirasto) studied the exposure of working-age and elderly people to cadmium, lead, arsenic, mercury, nickel and aluminum via food and drinking water. The magnitude of lead and inorganic arsenic intake was such that health hazards could not be ruled out, but their probability is low or at most moderate.

TOXICS 01/10/19 Biomonitoring of Trace Elements in Hair of Schoolchildren Living Near a Hazardous Waste Incinerator—A 20 Years Follow-Up (étude espagnole) Since 1998, a monitoring program is periodically performed to assess the environmental and human health impact of air chemicals potentially emitted by a hazardous waste incinerator (HWI) located in Constantí (Catalonia, Spain). 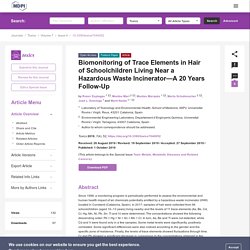 In 2017, samples of hair were collected from 94 schoolchildren (aged 10–13 years) living nearby and the levels of 11 trace elements (As, Be, Cd, Cr, Hg, Mn, Ni, Pb, Sn, Tl and V) were determined. The concentrations showed the following descending order: Pb > Hg > Ni > Sn > Mn > Cr. In turn, As, Be and Tl were not detected, while Cd and V were found only in a few samples. Some metal levels were significantly, positively correlated. FSAI - 2016 - Metals of Toxicological Importance in the Irish Diet. E3S WEB OF CONFERENCES (PL) - 2018 - Analysis of concentration trends and origins of heavy metal loads in stormwater runoff inselected cities: A review. Environmental Earth Sciences August 2017, 76:519 Assessment of heavy metal bioaccumulation in sorghum from neutral saline soils in the Po River Delta Plain (Northern Italy) PARLEMENT EUROPEEN - Réponse à question E-001793/2018 Iron hydroxide slurry at the bottom of the Spree and its surrounding waters.

Rising groundwater is causing iron from former and active opencast brown coal mines in Brandenburg and Saxony to flow into the Spree and its tributaries. 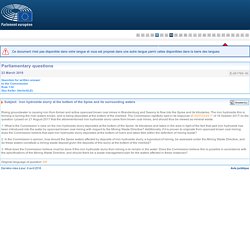 The iron hydroxide this is forming is turning the river waters brown, and is being deposited at the bottom of the riverbed. The Commission rightfully said in its response (E-005334/2017 of 16 October 2017) to the question I posed on 21 August 2017 that the aforementioned iron hydroxide slurry came from brown coal mines, and should thus be viewed as mineral waste. 1. What is the Commission’s view on the iron hydroxide slurry deposited at the bottom of the Spree, its tributaries and lakes in the area in light of the fact that said iron hydroxide has been introduced into the water by opencast brown coal mining with respect to the Mining Waste Directive?

2. 3. OPEN ACCESS JOURNAL OF TOXICOLOGY 13/12/17 Essential and Toxic Metals in Infant Formula from the European Community. WATER QUALITY via INTECH 18/01/17 Au sommaire: Aspects on the Accumulation of Trace Metals in Various Environmental Matrices (Water, Soil, Plant and Sediments): Case Study on Catchment Area of the Somes River, Romania. Open access peer-reviewed Edited volume As concerns increase over the scarcity of water resources and the role of anthropogenic activities, water quality is evermore important.

Activities ranging from agriculture to mining have had a bearing on the quality of water that they impact. Several studies assessing such impacts have been conducted at local and global scales over the years. PARLEMENT EUROPEEN - Réponse à question E-004704-17 Water protection (concerne les métaux lourds) The Commission supports Member States by providing implementation guidance and facilitating the exchange of best practices and knowledge in the context of the ‘Common Implementation Strategy’. 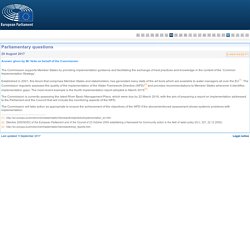 Established in 2001, this forum that comprises Member States and stakeholders, has generated many state of the art tools which are available to water managers all over the EU(1). The Commission regularly assesses the quality of the implementation of the Water Framework Directive (WFD)(2) and provides recommendations to Member States whenever it identifies implementation gaps. The most recent example is the fourth implementation report adopted in March 2015(3). The Commission is currently assessing the latest River Basin Management Plans, which were due by 22 March 2016, with the aim of preparing a report on implementation addressed to the Parliament and the Council that will include the monitoring aspects of the WFD. 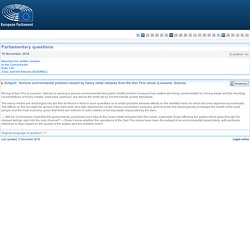 The heavy metals are discharged into the Ria de Muros e Noia in such quantities as to entail possible adverse effects on the shellfish beds on which the area depends economically. The effects on the ria might be serious if the dam built, and later abandoned, by the mining concession company were to burst; this would gravely endanger the health of the local people and the local economy, given that there are millions of cubic metres of mining waste impounded by the dam. — Will the Commission insist that the governments concerned put a stop to the heavy metal releases from the mines, especially those affecting the waters which pass through the disused tailings dam into the river channel? Environment International Volume 88, March 2016, Pages 299–309 Heavy metals in agricultural soils of the European Union with implications for food safety. Open Access Highlights The concentration of heavy metals including As, Cd, Cr, Cu, Hg, Pb, Zn, Sb, Co and Ni in soil of the EU was assessed.

An estimated 6.24% or 137,000 km2 agricultural land needs local assessment and eventual remediation action. A need for a comprehensive monitoring of HM in soil in the European Union is proposed. FOOD PACKAGING FORUM 22/02/16 Metals in ceramics and crystalware EU reference laboratory for FCMs tests metal release from decorated ceramics and crystalware into wine and wine-simulants; migration of lead, cadmium and other metals detected. In December 2015, the EU Reference Laboratory for food contact materials (EURL-FCM) of the European Commission’s (EC) Joint Research Centre (JRC) published two reports on the release of metals from decorated articles and crystalware, respectively, in support of the revision of the Ceramic Directive (84/500/EEC). In the scope of the second report, the release of metals from 15 samples of crystalware was investigated. Four different methods were used to test metal release: 1) Exposing samples to 4% aqueous acetic acid (AA4%) for 24 hours at 22°C, 2) exposing samples to 0.5% aqueous citric acid (CA0.5%) for two hours at 70°C, 3) pre-conditioning samples with 10% aqueous acetic acid for five hours followed by exposure to AA4% for 24 hours at 22°C, and 4) exposing samples to acidic white wine for 24 hours at 22°C.

INTECH 26/03/14 Environmental Risk Assessment of Soil Contamination – Chapitre 9 - Assessment of Soil Pollution with Heavy Metals in Romania. Edited by Maria C. Hernandez-Soriano, ISBN 978-953-51-1235-8, 918 pages, Publisher: InTech, Chapters published March 26, 2014 under CC BY 3.0 licenseDOI: 10.5772/57086 Soil is an irreplaceable resource that sustains life on the planet, challenged by food and energy demands of an increasing population. Therefore, soil contamination constitutes a critical issue to be addressed if we are to secure the life quality of present and future generations. Integrated efforts from researchers and policy makers are required to develop sound risk assessment procedures, remediation strategies and sustainable soil management policies.

Despite the high toxicity of the substances to be used in the pilot project for the storage of electricity generated by wind turbines, the Galician Government decided not to subject the project to environmental assessment, claiming that ‘it is unlikely to have a significant impact’. According to the Master Plan for the Natura Network in Galicia, this project would be subject to paragraph 4, ‘exclusion of activities’, group 2.1 on changes to wind farms that are subject to compulsory environmental assessment.