ANIMALS 23/08/21 Predictivity of Antemortem Findings on Postmortem Inspection in Italian Heavy Pigs Slaughterhouses. Pigs slaughtered in European abattoirs must be submitted to antemortem inspection (AMI) and postmortem inspection (PMI), as required by the current European legislation in the matter of official controls. 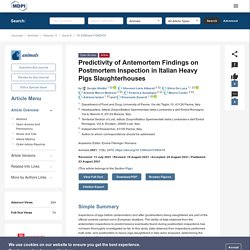 AMI and PMI are equally essential to guarantee food safety and to monitor swine health and welfare. However, little is known about the ability of AMI to predict conditions that are possibly found during PMI. In this study, such a correlation was explored together with the assessment of conditions typically found during AMI and PMI in heavy pigs slaughtered in two Italian slaughterhouses. An assessment scheme containing 13 variables for AMI and 34 lesions for PMI was used for the scope. The herd size was also considered as a variable and included in the study. ►▼ Show Figures Figure 1 Pigs slaughtered in European abattoirs must be submitted to antemortem inspection (AMI) and postmortem inspection (PMI), as required by the current European legislation in the matter of official controls. ANIMALS 18/05/21 Agricultural Holdings and Slaughterhouses’ Impact on Patterns of Pathological Findings Observed during Post-Mortem Meat Inspection. 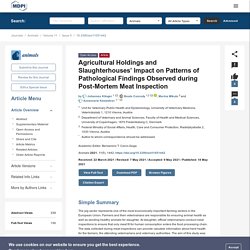 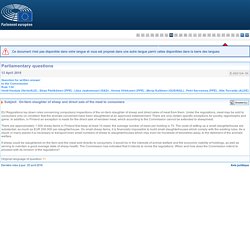 Under the regulations, meat may be sold to consumers only on condition that the animals concerned have been slaughtered at an approved establishment. There are only certain specific exceptions for poultry, lagomorphs and game. In addition, in Finland an exception is made for the direct sale of reindeer meat, which according to the Commission cannot be extended to sheepmeat. There are approximately 1 000 sheep farms in Finland that keep at least 10 ewes: the average number of ewes per holding is 70. The costs of setting up a small slaughterhouse are substantial: as much as EUR 200 000 per slaughterhouse. 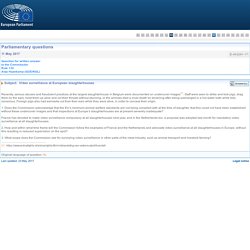 Staff were seen to strike and kick pigs, drag them by the ears, hoist them up alive and cut their throats without stunning, or the animals died a cruel death by drowning after being submerged in a hot water bath while fully conscious. Foreign pigs also had earmarks cut from their ears while they were alive, in order to conceal their origin. 1. Does the Commission acknowledge that the EU’s minimum animal welfare standards are not being complied with at the time of slaughter, that this could not have been established without these undercover images and that inspections at Europe’s slaughterhouses are at present severely inadequate? 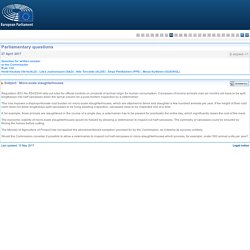 Carcasses of bovine animals over six months old have to be split lengthways into half carcasses down the spinal column for a post-mortem inspection by a veterinarian. This rule imposes a disproportionate cost burden on micro-scale slaughterhouses, which are attached to farms and slaughter a few hundred animals per year. If the height of their cold room does not allow lengthways-split carcasses to be hung awaiting inspection, carcasses have to be inspected one at a time. If, for example, three animals are slaughtered in the course of a single day, a veterinarian has to be present for practically the entire day, which significantly raises the cost of the meat. EFSA 03/12/13 Scientific Opinion on monitoring procedures at slaughterhouses for bovines.

This scientific opinion proposes toolboxes of welfare indicators for developing monitoring procedures at slaughterhouses for bovines stunned with penetrative captive bolt or slaughtered without stunning. In particular, the opinion proposes welfare indicators together with their corresponding outcomes of consciousness, unconsciousness or death. In the case of slaughter with captive bolt stunning, the opinion proposes a toolbox of indicators and the outcomes to be used to assess consciousness in bovine animals at three key stages of monitoring: (a) after stunning and during shackling and hoisting; (b) during neck cutting or sticking; and (c) during bleeding.

For slaughter of bovines without stunning, a set of indicators and outcomes are proposed in another toolbox to be used for (a) assessing unconsciousness, before releasing bovines from restraint; and (b) confirming death before carcass dressing begins. PARLEMENT EUROPEEN - Réponse à question E-015769-15 EU meat inspection rules at slaughterhouses. UNIVERSITY OF VETERINARY MEDICINE HANNOVER VIA SAFEPORK - 2013 - Abattoir-specific ways of implementing risk-based meat inspection methods in Germany. Publication Date January 2013 Abstract In the European Union serological and/or bacteriological monitoring results on zoonoses are to be taken into account for the risk assessment of slaughter pig herds in the framework of the risk-based meat inspection. 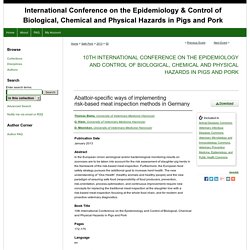 Furthermore, the European food safety strategy pursues the additional goal to increase herd health. The new understanding of “One Health” (healthy animals and healthy people) and the new paradigm of assuring safe food (responsibility of food producers, prevention, risk-orientation, process-optimization, and continuous improvement) require new concepts for replacing the traditional meat inspection at the slaughter line with a risk-based meat inspection focusing at the whole food chain, and for modern and proactive veterinary diagnostics. Book Title 10th International Conference on the Epidemiology and Control of Biological, Chemical and Physical Hazards in Pigs and Pork File Format. PARLEMENT EUROPEEN - Réponse à question E-002942-15 Contrôle vétérinaire dans le cadre des négociations du TTIP. «It's not whether or not people are going to eat shit — they are. 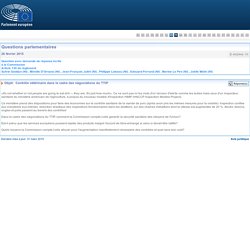 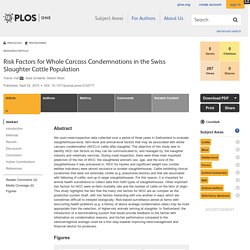 The objective of this study was to identify WCC risk factors so they can be communicated to, and managed by, the slaughter industry and veterinary services. During meat inspection, there were three main important predictors of the risk of WCC; the slaughtered animal's sex, age, and the size of the slaughterhouse it was processed in. WCC for injuries and significant weight loss (visible welfare indicators) were almost exclusive to smaller slaughterhouses. 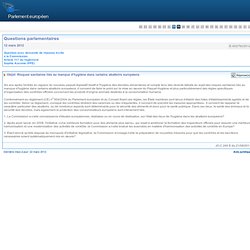 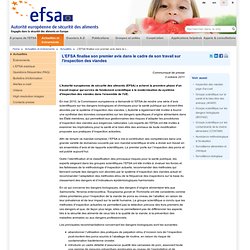 These hazards include Salmonella, Yersinia enterocolitica, Toxoplasma gondii, Trichinella, Cysticercus (Taenia solium) and mycobacteria. An epidemiological indicator is defined as the prevalence or incidence of the hazard at a certain stage of the food chain or an indirect measure of the hazards that correlates to human health risk caused by the hazard. . © European Food Safety Authority, 2011. EFSA Dossier: Modernisation de l’inspection des viandes.