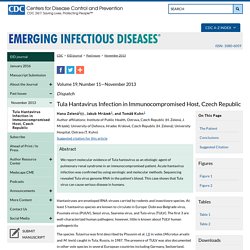 Zelená, J. Mrázek); University of Defence, Hradec Králové, Czech Republic (H. Zelená); University Hospital, Ostrava (T. Kuhn) Suggested citation for this article Abstract We report molecular evidence of Tula hantavirus as an etiologic agent of pulmonary-renal syndrome in an immunocompromised patient. Hantaviruses are enveloped RNA viruses carried by rodents and insectivore species. The species Tulavirus was first described by Plyusnin et al. (1) in voles (Microtus arvalis and M. levis) caught in Tula, Russia, in 1987. The causative agents of hemorrhagic fever with renal syndrome in Central Europe are Dobrava-Belgrade virus and PUUV (4). A 14-year-old boy from a rural region in the northeast part of the Czech Republic (Opava region) has received treatment for acute lymphoblastic leukemia since July 2011. RNA was extracted from an EDTA plasma sample taken on day 11. 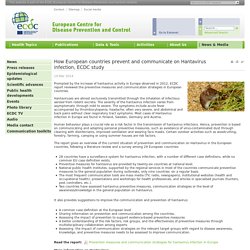 Hantaviruses are almost exclusively transmitted through the inhalation of infectious aerosol from rodent excreta. The severity of the hantavirus infection varies from asymptomatic through mild to severe. The symptoms include acute fever accompanied by thrombocytopenia, headache, often very severe, and abdominal and back pains without clear respiratory tract symptoms. 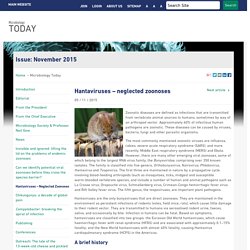 Approximately 60% of infectious human pathogens are zoonotic. These diseases can be caused by viruses, bacteria, fungi and other parasitic organisms. The most commonly mentioned zoonotic viruses are influenza, rabies, severe acute respiratory syndrome (SARS), and more recently, Middle East respiratory syndrome (MERS) and Ebola. Hantaviruses are the only bunyaviruses that are direct zoonoses. A brief history Although formally described half a century ago, history suggests that hantaviruses have been around for much longer. In 1718, another similar, but less lethal, infection was recorded in France and, later on, around Europe. Hantavirus disease was also suggested to be the causative agent of many cases of epidemic nephritis during the American Civil War and World War I. 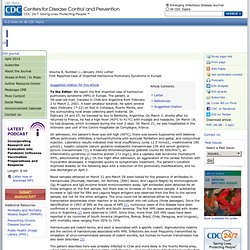 Protecting People.™ <div class="noscript"> Note: Javascript is disabled or is not supported by your browser. Emerging Infectious Disease ISSN: 1080-6059 Volume 8, Number 1—January 2002 Letter First Reported Case of Imported Hantavirus Pulmonary Syndrome in Europe Article Contents Suggested citation for this article To the Editor: We report the first imported case of hantavirus pulmonary syndrome (HPS) in Europe. On admission, the patient’s fever was still high (40°C), there was severe hypoxemia with bilateral diffuse pulmonary infiltrates, a tachyarrhythmia with auricular fibrillation and gallop, and conjunctival injection. Hantaviruses are rodent-borne, and each is associated with a specific rodent. Bernadette Murgue*, Yves Domart, Daniel Coudrier*, Pierre E. 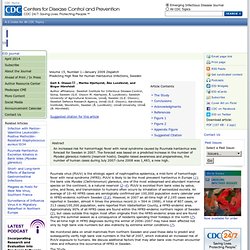 Hantavirus infections are widely distributed in Europe with the exception of the far north and the Mediterranean regions. 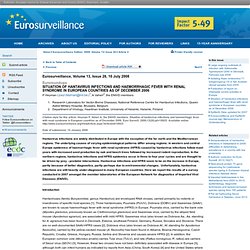 The underlying causes of varying epidemiological patterns differ among regions: in western and central Europe epidemics of haemorrhagic fever with renal syndrome (HFRS) caused by hantavirus infections follow mast years with increased seed production by oak and beech trees followed by increased rodent reproduction. In the northern regions, hantavirus infections and HFRS epidemics occur in three to four year cycles and are thought to be driven by prey - predator interactions. Hantavirus infections and HFRS seem to be on the increase in Europe, partly because of better diagnostics, partly perhaps due to environmental changes. EUROSURVEILLANCE 08/09/11 A five-year perspective on the situation of haemorrhagic fever with renal syndrome and status of the h.

Hantavirus infections are reported from many countries in Europe and with highly variable annual case numbers. 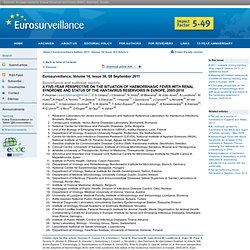 In 2010, more than 2,000 human cases were reported in Germany, and numbers above the baseline have also been registered in other European countries. Depending on the virus type human infections are characterised by mild to severe forms of haemorrhagic fever with renal syndrome. The member laboratories of the European Network for diagnostics of Imported Viral Diseases present here an overview of the progression of human cases in the period from 2005 to 2010. Further we provide an update on the available diagnostic methods and endemic regions in their countries, with an emphasis on occurring virus types and reservoirs. Introduction.