Images of 'invisible' holes on cells may jumpstart research. High blood pressure, inflammation, and the sensation of pain may rely in part on tiny holes on the surface of cells, called pores. 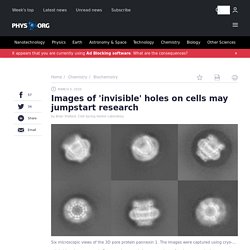 Living cells react to the environment, often by allowing water and other molecules to pass through the cell's surface membrane. Protein-based pores control this flow. One set of pores, called pannexins, are like tiny "black holes" of biology; their existence has been confirmed by computational and functional evidence but until very recently, they were never actually seen. They help cells communicate with and react to their surroundings, but until scientists see what they look like, it is hard to know how.

Researchers reconstruct migration movements through ancient DNA. The Mediterranean Sea has been a major route for maritime migrations as well as frequent trade and invasions during prehistory, yet the genetic history of the Mediterranean islands lacks detailed documentation, despite recent developments in the study of ancient DNA. 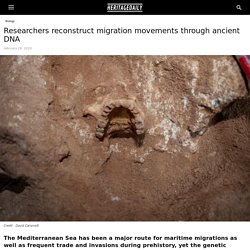 An international team led by researchers from the University of Vienna, Harvard University and University of Florence, Italy, is filling in the gaps with the largest study to date of the genetic history of ancient populations of Sicily, Sardinia and the Balearic Islands, increasing the number of individuals with reported data from 5 to 66. Scientists develop more accurate stem-cell model of early developing mouse embryo - Hubrecht Institute. Earliest interbreeding event between ancient human populations discovered. For three years, anthropologist Alan Rogers has attempted to solve an evolutionary puzzle. 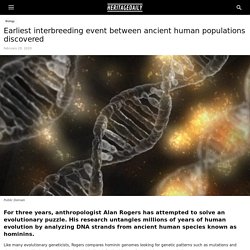 His research untangles millions of years of human evolution by analyzing DNA strands from ancient human species known as hominins. Like many evolutionary geneticists, Rogers compares hominin genomes looking for genetic patterns such as mutations and shared genes. Cells' springy coils pump bursts of RNA. In your cells, it's almost always spring. 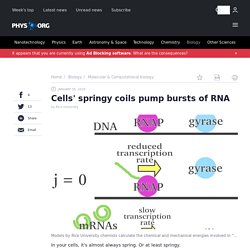 Or at least springy. Bioscientists have known for some time that chromosomes tend to express their protein products in bursts, rather than in a steady manner. A new theoretical study by Rice University scientists, detailed in the Biophysical Journal, aims to better explain the process that combines chemical reactions and mechanical forces. Rice chemist Anatoly Kolomeisky and applied physics graduate student and lead author Alena Klindziuk built the first simplified analytical model of "bursting" to show how pressure from a RNA polymerase enzyme triggers the rush of RNA production, but only to the degree that it can push a coil of DNA.

Modified RNA has a direct effect on DNA. An article titled "m6A RNA modification as a new player in R-loop regulation," by the Dynamic Gene Regulation research group led by Arne Klungland at IMB, was published in the January edition of Nature Genetics. 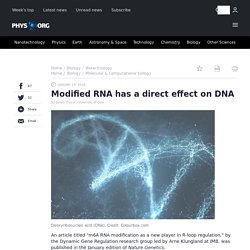 Following a new collaboration between UiO and research groups in Nottingham and Oxford, it has now been revealed that RNA has a direct effect on DNA stability, according to Professor Klungland's research. He believes the discovery will provide the health service with an important tool, since many studies have shown that the regulation of modifications to RNA is important for the development of cancer. If genes that are important for the chemical compound 6-methyladenine are completely removed, this results in neurodegeneration in both mice and humans. Where and how. Scientists uncover new mode of evolution. Evolution and natural selection take place at the level of DNA, as genes mutate and genetic traits either stick around or are lost over time. 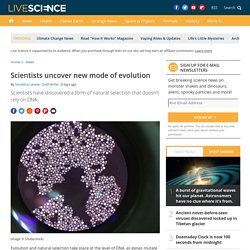 But now, scientists think evolution may take place on a whole other scale — passed down not through genes, but through molecules stuck to their surfaces. These molecules, known as methyl groups, alter the structure of DNA and can turn genes on and off. Microscopy technique reveals cells' 3-D ultrastructure in new detail. Inside a cell, tentacled vesicles shuttle cargo for sorting. 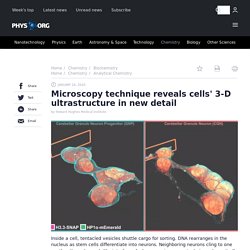 DNA rearranges in the nucleus as stem cells differentiate into neurons. Scientists use stem cells from frogs to build first living robots. Be warned. 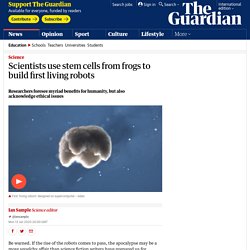 If the rise of the robots comes to pass, the apocalypse may be a more squelchy affair than science fiction writers have prepared us for. Researchers in the US have created the first living machines by assembling cells from African clawed frogs into tiny robots that move around under their own steam. Www.sciencemag. No biologist would mistake the microscopic "cells" that chemical biologist Neal Devaraj and colleagues are whipping up at the University of California, San Diego (UCSD), for the real thing. 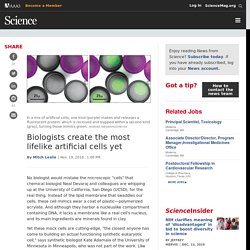 Instead of the lipid membrane that swaddles our cells, these cell mimics wear a coat of plastic—polymerized acrylate. Index. "What we did is, for the first time, we managed to promote the self-organization of stem cells into a very early embryo in a dish -- so everything happened in the lab," said Nicolas Rivron, lead author of the new study and a biologist, engineer and assistant professor at Maastricht University in the Netherlands. 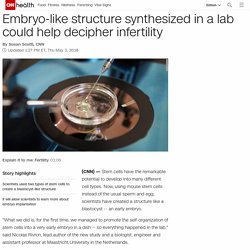 The research was published Wednesday in the international science journal Nature. To achieve this scientific feat, Rivron and his team combined embryonic stem cells, which have the potential to form a whole embryo, with trophoblast stem cells, which have the potential to form a placenta. Without a placenta, which attaches the embryo to the uterine wall, an embryo cannot develop into a fetus. "We pulled them together and discovered a cocktail of molecules that triggered them to self-organize into early embryo cells," Rivron said. He added that, for the first time, these very early embryos were able to implant in the uterus of a mouse when transferred. Deep learning helps tease out gene interactions.

Carnegie Mellon University computer scientists have taken a deep learning method that has revolutionized face recognition and other image-based applications in recent years and redirected its power to explore the relationship between genes. The trick, they say, is to transform massive amounts of gene expression data into something more image-like. Convolutional neural networks (CNNs), which are adept at analyzing visual imagery, can then infer which genes are interacting with each other. The CNNs outperform existing methods at this task. The researchers' report on how CNNs can help identify disease-related genes and developmental and genetic pathways that might be targets for drugs is being published today in the Proceedings of the National Academy of Science. But Ziv Bar-Joseph, professor of computational biology and machine learning, said the applications for the new method, called CNNC, could go far beyond gene interactions.

What keeps cells in shape? New research points to two types of motion. The health of cells is maintained, in part, by two types of movement of their nucleoli, a team of scientists has found. This dual motion within surrounding fluid, it reports, adds to our understanding of what contributes to healthy cellular function and points to how its disruption could affect human health. "Nucleolar malfunction can lead to disease, including cancer," explains Alexandra Zidovska, an assistant professor in New York University's Department of Physics and the senior author of the study, which appears in the journal eLife.

"Thus, understanding the processes responsible for the maintenance of nucleolar shape and motion might help in the creation of new diagnostics and therapies for certain human afflictions. " Recent discoveries have shown that some cellular compartments don't have membranes, which were previously seen as necessary to hold a cell together. DNA Just One of More Than 1 Million Possible 'Genetic Molecules,' Scientists Find. DNA and its cousin RNA store genetic information and enable life as we know it — but what if millions of lesser-known chemicals could do the exact same thing? A new study suggests that more than 1 million chemical look-alikes could encode biological information in the same way that DNA does. The new study, published Sept. 9 in the Journal of Chemical Information and Modeling, might point the way to new targets for pharmaceutical drugs, explain how life first evolved on Earth and even help us search for life-forms beyond our planet, the authors wrote.

"It is truly exciting to consider the potential for alternate genetic systems ... that these might possibly have emerged and evolved in different environments, perhaps even on other planets or moons within our solar system," co-author Jay Goodwin, a chemist at Emory University, said in a statement. Related: 7 Theories on the Origin of Life "The answer is, there seem to be many, many more than was expected," Cleaves said. DNA Is Just One Among Millions of Possible Genetic Molecules – Clues for Origin of Life & Search for Extraterrestrial Biology. Mysterious microproteins have major implications for human disease. As the tools to study biology improve, researchers are beginning to uncover details into microproteins, small components that appear to be key to some cellular processes, including those involved with cancer. Proteins are made up of chains of linked amino acids and the average human protein contains around 300 amino acids.

Meanwhile, microproteins have fewer than 100 amino acids. One such microprotein is the 54-amino acid microprotein called PIGBOS, which Salk scientists recently showed contributes to mitigating cell stress. The work, published on October 25, 2019, in the journal Nature Communications, indicates that PIGBOS could be a target for human disease. New thermodynamic framework for cells. Physicists at the University of Luxembourg have developed theoretical tools to analyze and optimize chemical engines ranging from simple chemical reaction networks to complex metabolic pathways. New DNA-editing method could fix 89% of genetic diseases, scientists claim. A new form of gene editing that behaves like the 'find and replace' function in word processors and digital spreadsheets can more accurately fix DNA mutations behind devastating conditions like sickle cell disease, scientist claim.

Choice page. A New Crispr Technique Could Fix Almost All Genetic Diseases. Scientists Were Wrong About DNA – It Is Actually Held Together by Hydrophobic Forces. For DNA to be read, replicated or repaired, DNA molecules must open themselves. This happens when the cells use a catalytic protein to create a hydrophobic environment around the molecule. A Light-Based Carrier System For... - Transcendent Man. High-frequency genome editing using ssDNA oligonucleotides with zinc-finger nucleases : Nature Methods : Nature Research. Gene Discovered That Could Boost IQ by 6 Points: Image via Alex Mit. DNA. Genetics of Addiction. Genetics: the blueprint of health and disease The International HapMap Project has identified 3.1 million single nucleotide polymorphisms (SNPs).