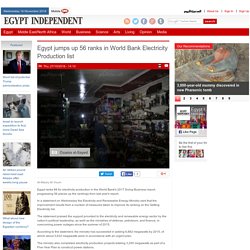 In a statement on Wednesday the Electricity and Renewable Energy Ministry said that the improvement results from a number of measures taken to improve its ranking on the Getting Electricity list. Energy-rich Egypt seen by 2020. German firm siemens is working on a war-footing to complete the three power generating plants in Beni Suef, El Borolus and the new administrative capital. 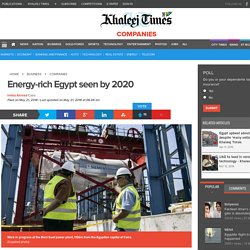 The plants will enhance Egypt's power generation capacity by 50 per cent and create more than 30,000 jobs, said Siemens officials. Speaking at a ceremony, the officials said that when completed, the plants would add 16.4GW to Egypt's national grid by 2020. This would boost the country's power capacity with surplus energy. Egypt had awarded Siemens with ? 8 billion (Dh33 billion) record energy orders last year to increase the country's power generation, making it self-sufficient to meet the growing power demands. Demonstrating the firm's commitment to a strict implementation schedule, a ceremony was held by Siemens at the 500,000sqm Beni Suef site in the presence of Egyptian Minister of Electricity and Renewable Energy Dr Mohamed Shaker. - imtiaz@khaleejtimes.com. Russia extends $25b loan for construction of Egypt's nuclear power plant. The construction of Egypt’s nuclear power plant has received a shot in the arm after Russia extended a US$ 25 Billion loan towards the construction of the nuclear plant.The move essentially makes Russia a major sponsor for the nuclear power project. 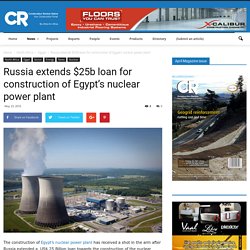 President Fattah el-Sisi said that the project will remain Key to the country as they look forward to curb the current power shortage facing the country. Egypt, which will cover the other 15 percent, is to repay the loan over a 22-year period, starting in 2029, with a 3 percent annual interest rate. Egypt and Russia agreed in February 2015 to build the plant together and signed a memorandum of understanding on the project. But the relations between the two nations were badly impacted after the horrific Russian passenger plane crash in Sinai last October, when all 224 people on board were killed. Egypt, with a population of 90 million and vast energy requirements, is seeking to diversify its energy sources. Egypt adds 3,600 MW to national grid. Egypt has inaugurated eight power stations, adding more than 3,600 megawatts to the national electricity grid at a total cost of $2.7 billion. 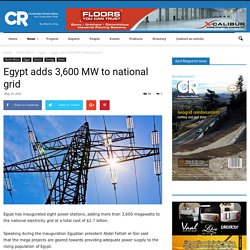 Speaking during the inauguration Egyptian president Abdel Fattah el-Sisi said that the mega projects are geared towards providing adequate power supply to the rising population of Egypt. The projects, several of which entered service throughout the past year, include the Upper Egypt West Assiut power station that has a production capacity amounting to 1,000 megawatts. The West Assiut power station was constructed by a consortium led by General Electric at a cost of $776.5 million and began operations in two phases in May and August 2015, the media office at the electricity ministry told Ahram Online.

As the summer approaches this year, Egyptians are dreading what has become frequent over the past few years — power outages — that have not only hit households but also the production capacity of energy intensive industries. Egypt Energy Sector Attracted Investments Exceeding $21 Billion - Investment. Ready to Run: Powering Egypt. Egypt: Cabinet approves $600m loan for Damanhur power station. East Africa: Egypt Pulls Out of Regional Power Pool As It Protests Use of Nile Waters. By Christabel Ligami Egypt has pulled out of the grand East African regional power pool until its concerns over the use of the Nile waters have been addressed. 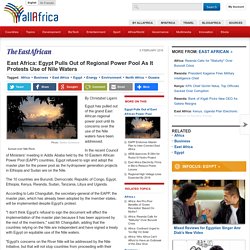 In the recent Council of Ministers' meeting in Addis Ababa held by the 10 Eastern African Power Pool (EAPP) countries, Egypt refused to sign and adopt the master plan for the power pool as the hydropower generation projects in Ethiopia and Sudan are on the Nile. The 10 countries are Burundi, Democratic Republic of Congo, Egypt, Ethiopia, Kenya, Rwanda, Sudan, Tanzania, Libya and Uganda. According to Lebi Changullah, the secretary-general of the EAPP, the master plan, which has already been adopted by the member states, will be implemented despite Egypt's protest. "Egypt's concerns on the River Nile will be addressed by the Nile Initiative, but that will not stop countries from proceeding with their plans," he added.