AfDB to Invest US$12 Billion to Accelerate Electricity in Africa. The African Development Bank (AfDB) has committed itself to invest US$12 billion to speed up electricity supply in Africa, leveraging between US$45 to 50 billion from the private sector, the Bank’s Executive Director Dr. 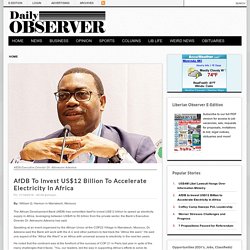 Akinwumi Adesina has said. Speaking at an event organized by the African Union at the COP22 Village in Marrakech, Morocco, Dr. Adesina said the Bank will work with the A U and other partners to fast track the “Africa We want.” ADEA - Energy for Africa. Africa Next Frontier for Nuclear Technology. By Mike Owuor Africa is positioning itself as the next frontier for nuclear technology with several countries signing agreements to push ahead with programmes that are at various stages of development. 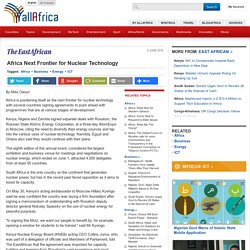 Kenya, Nigeria and Zambia signed separate deals with Rosatom, the Russian State Atomic Energy Corporation, at a three-day AtomExpo in Moscow, citing the need to diversify their energy sources and tap into the various uses of nuclear technology. Namibia, Egypt and Ghana also said they would continue with their plans. The eighth edition of this annual event, considered the largest exhibition and business venue for meetings and negotiations on nuclear energy, which ended on June 1, attracted 4,500 delegates from at least 55 countries.

South Africa is the only country on the continent that generates nuclear power, but has in the recent past faced opposition as it aims to boost its capacity. Other countries that reaffirmed that their programmes were on course included Egypt and Ghana. Gowling WLG - Supporting off-grid solar development in Africa. May 19, 2016 Inspired by Barack Obama's Power Africa Programme, the UK’s ‘Energy Africa’ campaign will tackle the low level of electricity access in Africa. 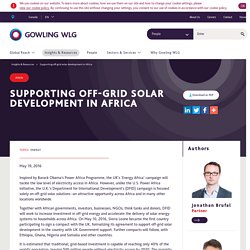 However, unlike the U.S. Power Africa initiative, the U.K.’s Department for International Development's (DFID) campaign is focused solely on off-grid solar solutions –an attractive opportunity across Africa and in many other locations worldwide. Together with African governments, investors, businesses, NGOs, think tanks and donors, DFID will work to increase investment in off-grid energy and accelerate the delivery of solar energy systems to households across Africa. 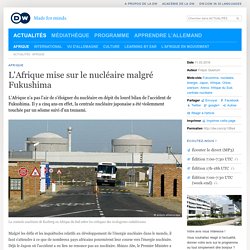 Coal gas fuels African interest. Where there is coal, there is gas – a deadly hazard to early miners, who carried canaries with them to warn of its poisonous presence. 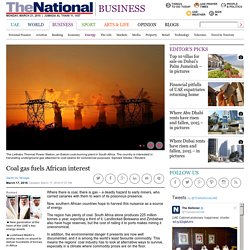 Now, southern African countries hope to harvest this nuisance as a source of energy. The region has plenty of coal. South Africa alone produces 225 million tonnes a year, exporting a third of it. Landlocked Botswana and Zimbabwe also have huge reserves, but the cost of railing it to ports makes mining it uneconomical. In addition, the environmental danger it presents are now well documented, and it is among the world’s least favourite commodity. “Coal miners are hanging on the edge and are facing tough decisions," says Liz de Klerk, a Venmyn Deloitte mining advisory manager and coal specialist. South Africa has about 30 billion tonnes of mineable reserves, according to the Chamber of Mines, enough for another 100 years using current technology. An alternative to scooping it out of the ground is to harvest the gas it produces. Africa: Powerless - Lack of Grid Access, Unreliable Electricity Supply Still Plague Majority of Africans, Survey Finds.

Press release Accra — While more Africans live within reach of an electric grid than a decade ago, only four in 10 enjoy a reliable power supply, according to new survey findings from Afrobarometer. 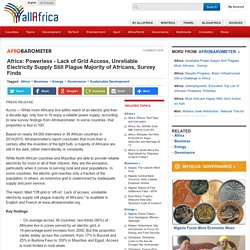 In some countries, that proportion is four in 100. Based on nearly 54,000 interviews in 36 African countries in 2014/2015, Afrobarometer's report concludes that more than a century after the invention of the light bulb, a majority of Africans are still in the dark, either intermittently or constantly. While North African countries and Mauritius are able to provide reliable electricity for most or all of their citizens, they are the exception, particularly when it comes to serving rural and poor populations. Africa’s energy revolution is almost here. You can’t create a modern economy without access to energy, and lots of it. 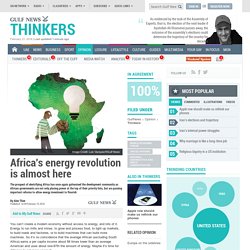 Energy to run mills and mines, to grow and process food, to light up markets, to build roads and factories, or to build machines that can build more machines. So it’s no coincidence that the average African (excluding South Africa) earns a per capita income about 88 times lower than an average American and uses about one-87th the amount of energy. Maybe it’s time for Africans to get more energy? With United States President Barack Obama’s launch of the Power Africa initiative in 2013 and the new Electrify Africa bill passed by the US Congress on February 1 (that’s right — Congress got something done, and it was a foreign aid bill, no less), the prospect of electrifying Africa has once again galvanised the development community. 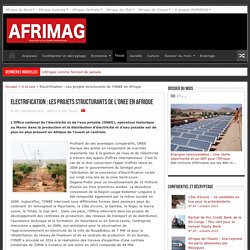 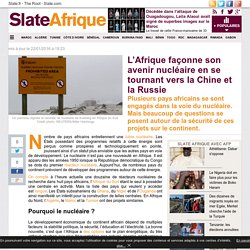 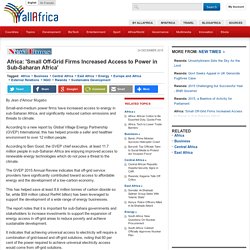 Private sector invests over $4bn yearly in power – AfDB. Over $4 billion annually is now devoted by private sector investors to independent power projects (IPPs) across sub-Saharan Africa, with South Africa taking the lead in IPPs for renewable energy with close to $14 billion in expected investments, from wind to solar energy. Akinwunmi Adesina, managing director, African Development Bank (AfDB), made this disclosure during the bank’s Energy Week where he also lamented the level of energy paucity in Africa in spite of her great potentials in renewable energy.

Lack of energy is the most critical challenge facing Africa today as over 645 million Africans do not have access to energy, he said, saying Africa has the largest energy poverty in the world. The situation, he said, “has been like this for so long to the extent that we forget that lack of energy is not normal. The abnormal has become the normal.

Political will, he stated, is crucial to light up and power Africa, saying that the task is immense, but the benefits will be huge. African utilities say end to power cuts a decade away - Times LIVE. Africa's installed power generation capacity is expected to quadruple to 380 gigawatts (GW) in 2040 from 90 GW in 2012, boosted by private investment, green energy initiatives and cross border energy trade, the survey showed. Three quarters of respondents said there was "a medium to high probability that the private sector will own and operate" more than half of power generating projects by 2025. The investment required to improve electricity access in Africa was "immense" and the continent needed about $450 billion over the next 25 years to electrify all urban areas, the report said, citing the high cost of power projects was a concern.

Respondents hoped private sector investments would help improve power production, citing that access to funding for new capital projects was a problem. They cited a lack of regulatory change, coupled with the "failure to implement cost reflective tariffs and overall difficulty of raising finance" as barriers to investment. How Africa gets power to 620 million more people could have a huge influence on our world. In South Africa, major cities are subject to regular power outages as electric utility Eskom periodically shuts down parts of its distribution system to take the pressure off the aging national grid.

Whole areas of Cape Town and Johannesburg are without power for hours at a time, a “last resort” Eskom is forced to resort to on a regular basis. In Nigeria, the country’s biggest wireless service provider, MTN, has said it may have to shut down its services temporarily due to a shortage of diesel, with electricity production at an all-time low. Chronic shortages of power such as these affect the whole of sub-Saharan Africa. Almost 620 million people — 60 percent of the region’s population — lack access to electricity, according to the African Development Bank. Africa’s poorest pay the highest prices for energy - Business. Two-thirds of Africa still without power. Right at this very moment 621m Africans – two-thirds of the continent's population – live without electricity. And the numbers are rising. A kettle boiled twice a day in the United Kingdom uses five times as much electricity as someone in Mali uses in a year.

Nigeria is one of the world's biggest oil exporters but 93m Nigerians depend on firewood and charcoal for heat and light. On current trends, there is no chance that Africa will hit the global target of energy for all by 2030. Not in headlines Unlike droughts, health epidemics and illiteracy, Africa's energy crisis seldom makes the headlines. 5 Energy Treasures in Africa You Haven’t Heard About. Electricity supply problems are once again news in several African countries with recurring power outages in Benin, Cameroon, Côte d'Ivoire and Madagascar, to name just a few of those most recently affected.

In Benin, a private Nigerian company supplies much of the country’s electricity. A report on the Kongossa blog [fr] describes the current situation in Cameroon. Africa: A brightening continent. FOR THE WORLD’S 1.2 billion poorest people, who are facing a long and perhaps endless wait for a connection to mains electricity, solar power could be the answer to their prayers. A further 2.5 billion are “underelectrified”, in development parlance: although connected to the grid, they can get only unreliable, scanty power. That blights lives too. The whole of sub-Saharan Africa, with a population of 910m, consumes only 145 terawatt hours of electricity a year—less than the 4.8m people who live in the state of Alabama.

Africa leaping off-grid. Sub-Saharan Africa is one of the least developed areas in the world. According to the World Bank, of the approximately 940 million people living in the region, roughly 600 million lack access to electricity. Moreover, the number of people in Sub-Saharan Africa without electricity has actually been increasing as the population growth has outpaced the rate of electrification. Lack of access to electricity greatly limits the development prospects of these, largely rural, Africans, as they are greatly limited in their performance of basic tasks, such as reading at night. Furthermore, communication with the outside world is heavily restrained, as there is limited access to telecommunications and the Internet. To meet their basic energy needs, many Africans then resort to primitive sources of energy, such as kerosene lamps or burning of biomass, that are both expensive and environmentally damaging.

Africa Energy Infrastructure Development and Change. It is no news that across the African continent infrastructure investment and thus development has lagged behind. Electricity supply shortages, disruptions ‘proving costly for Africa’ ELECTRICITY supply shortages and disruptions have become very costly for African countries, with some increasingly resorting to privatising energy provision, a conference heard on Friday.

South Africa is among those countries struggling with power supply disruptions, which companies based in the country have in the past identified as one of the main challenges to doing business. A lack of adequate electricity was identified as one of the main constraints to economic growth at the two-day International Monetary Fund’s (IMF’s) Africa Rising conference, which concludes on Friday. Competition Increases for African Countries Seeking FDI into their Power Sectors. Sub-Saharan Africa: The Quest for Expanded Electricity Access.