Ghana's Energy Crisis: Ghana to get another power barge - Oil & Gas. As part of the measures to curb the country’s three-protracted energy crisis, government announced the decision in 2015 to procure two power barges from Turkey. 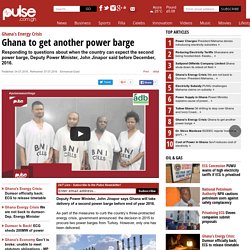 However, only one has been delivered. Responding to questions about when the country can expect the second power barge, Deputy Power Minister, John Jinapor said before December, 2016. READ MORE: Karpower GNPC is not responsible for fuelling power barge- Karpower “ I have personally visited them in Turkey, I have seen the construction, where they are and they have given us timelines. So I can confirm to you that this year, there is going to be 450 Mega Watts power barge coming in.” This may mean that the Karpower ship currently operating in Ghana may be sent away when Ghana takes delivery of the second barge.

“We are in discussions with the Karpower ship and we have the option of maintaining them or letting them go”, John Jinapor. Download our mobile app today. Android - Google Play Store. Ghana: No More Dumsor - Load Shedding Comes to an End in Ghana - Power Ministry. The Ministry of Power has announced an end to load shedding in a statement released on Wednesday December 30. 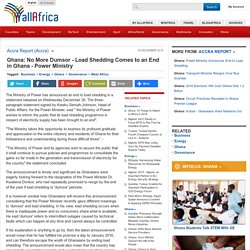 The three-paragraph statement signed by Kweku Sersah-Johnson, Head of Public Affairs, for the Power Minister, said " the Ministry of Power wishes to inform the public that its load shedding programme in respect of electricity supply has been brought to an end". "The Ministry takes this opportunity to express its profound gratitude and appreciation to the entire citizenry and residents of Ghana for their forbearance and understanding during those difficult times". 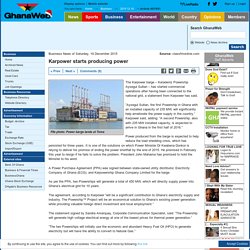 Ghana plans electricity supply to Nigeria, Ivory Coast, others. •Gas supply from WAGP drops to 30m cubic feet IN a paradoxical turn of events, Ghana may soon become a net importer of electricity to Nigeria, going by its current plan to raise its generating capacity. 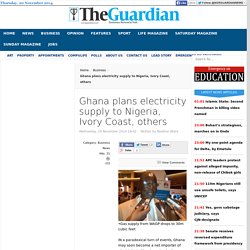 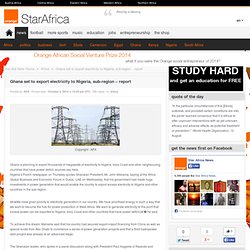 Nigeria’s Punch newspaper on Thursday quotes Ghanaian President, Mr. John Mahama, saying at the Africa Global Business and Economic Forum in Dubai, UAE on Wednesday, that his government had made huge investments in power generation that would enable the country to export excess electricity to Nigeria and other countries in the sub-region. â€œWe have given priority to electricity generation in our country.

We have prioritised energy in such a way that we want to become the hub for power production in West Africa. To achieve this dream, Mahama said that his country had secured export-import financing from China as well as special funds from Abu Dhabi to commence a series of power generation projects and that a third hydropower dam project was already at an advanced stage. Signature : APA Copyright : © APA. - ENERGY DEMAND final PD.pdf. Lagos, Oando complete N3.2b power plant. Slide 1 - index.php.

Africa Investor - Ai News. Wednesday, 10 Apr 2013 Even though Ghanaians are facing a power crisis, which has resulted in massive load shedding and power disruptions, Ghana’s energy sector is relatively well positioned compared to other African countries in sub-Saharan Africa in terms of electricity access and utilisation, says Kwaku Awotwe, CEO of the Volta River Authority (VRA). 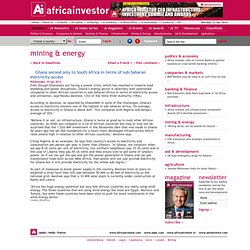 Govt 5,000 MW Of Power Target Is On Course Mahama Tells The Nation. President Mahama on Monday said government's determination to produce 5,000 megawatts of energy was not only achievable, but was also on course to make Ghana a net exporter of the commodity. 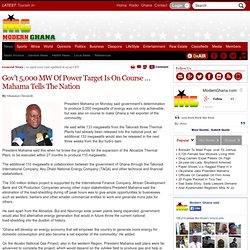 He said while 133 megawatts from the Takoradi three Thermal Plants had already been released into the national pool, an additional 133 megawatts would also be released in the next three weeks from the Bui hydro dam. President Mahama said this when he broke the grounds for the expansion of the Aboadze Thermal Plant, to be executed within 27 months to produce 110 megawatts. The additional 110 megawatts is collaboration between the government of Ghana through the Takoradi International Company, Abu Dhabi National Energy Company (TAQA) and other technical and financial stakeholders. 'Ghana will develop an energy economy that will empower the country to generate more energy for domestic consumption and also become a net exporter of the commodity.' He added. Mr. Mr. Nigeria_gas_oil_624.gif (GIF Image, 624 × 575 pixels) MacBaron Group to provide Ghana with 2000 MW power. The MacBaron Group has developed a 2,000 Megawatts (MW) project in response to Ghana’s power generation needs in the Ketu Area of the Volta Region. 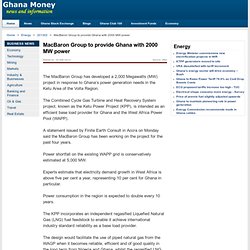 The Combined Cycle Gas Turbine and Heat Recovery System project, known as the Ketu Power Project (KPP), is intended as an efficient base load provider for Ghana and the West Africa Power Pool (WAPP). A statement issued by Finite Earth Consult in Accra on Monday said the MacBaron Group has been working on the project for the past four years. Power shortfall on the existing WAPP grid is conservatively estimated at 5,000 MW. Experts estimate that electricity demand growth in West Africa is above five per cent a year, representing 10 per cent for Ghana in particular. Power consumption in the region is expected to double every 10 years. The KPP incorporates an independent regasified Liquefied Natural Gas (LNG) fuel feedstock to enable it achieve international industry standard reliability as a base load provider. Ghana - Charles Darku, CEO of the Ghana Grid Company, GRIDCo.

The original report was distributed in Financial Times Deutschland on Friday, April 13, 2012. 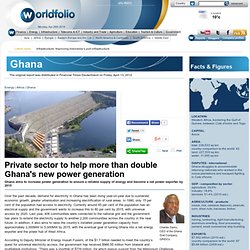