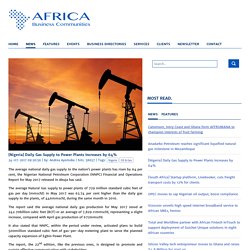 The average Natural Gas supply to power plants of 729 million standard cubic feet of gas per day (mmscfd) in May 2017 was 63.74 per cent higher than the daily gas supply to the plants, of 446mmscfd, during the same month in 2016. The report said the average national daily gas production for May 2017 stood at 242.70billion cubic feet (BCF) or an average of 7,829.11mmscfd, representing a slight increase, compared with April gas production of 672mmscfd. 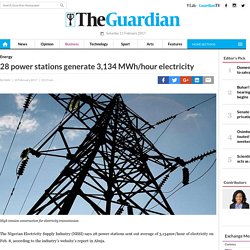 The report obtained by the News Agency of Nigeria (NAN) on Friday, also indicated that the power sector also lost estimated N1, 043,000, 000 on Feb.8 due to constraints of gas supply and water supply to the power generating stations. According to the report, the total gas constraints for the period results in the loss of 2,024MW while the reported grid constraint was zeroMW and the water management constraint, 150MW. On sector reform activities, NESI said Delta power station lost functionality from four turbines due to combination of mechanical difficulties and maintenance work at Nigeria Petroleum Development Company (NPDC) gas well. The report also said there was increase in gas constraints due to the maintenance work on NPDC gas well. 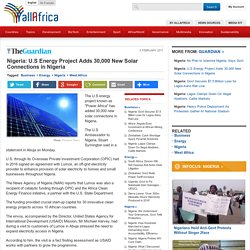 The U.S Ambassador to Nigeria, Stuart Symington said in a statement in Abuja on Monday. U.S. through its Overseas Private Investment Corporation (OPIC) had in 2016 signed an agreement with Lumos, an off-grid electricity provider to enhance provision of solar electricity to homes and small businesses throughout Nigeria. The News Agency of Nigeria (NAN) reports that Lumos was also a recipient of catalytic funding through OPIC and the Africa Clean Energy Finance initiative, a partner with the U.S. 2017 Budget: Rural electrification gets N16bn. By Chris Ochayi NATIONAL Rural Electrification Agency, NREA, has been allocated a total sum of N16,137,871,005 in the 2017 fiscal proposal of the Ministry of works, Power and Housing. 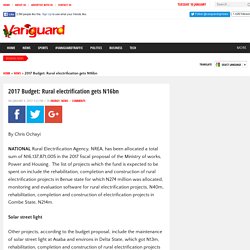 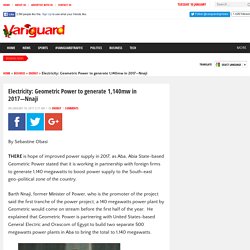 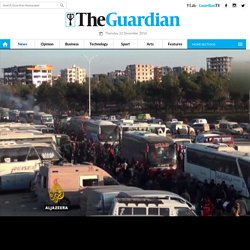 Ogbonnaya Onu The Federal Government says it will embark on building of nuclear plants and careful application of nuclear energy to meet the needs of the country. Work begins on $50m modular refinery in Akwa Ibom — News — The Guardian Nigeria. The Minister of State for Pretroleum Resources Emmanuel Ibe Kachikwu PHOTO: TWITTER/NNPC The Minister of State for Petroleum, Mr. 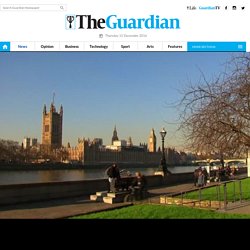 Ibe Kachikwu, has inaugurated the Ikwe-Onna Modular Refinery in Akwa Ibom State. Kachikwu, who commended the promoters of the $50million refinery, said the Federal Government was ready to support any private sector-driven venture. Governor Udom Emmanuel and Science and Technology Minister, Dr. Ogbonnaya Onu and others witnessed the opening. The governor lauded the management of the refinery for supporting his vision to industrialise the state. FG spent $1bn on kerosene subsidy in 2015 - Osinbajo. By Sebastine Obasi, Michael Eboh & Prince Okafor ABUJA— Against the backdrop of skyrocketing price of kerosene in the country, Vice President Yemi Osinbajo, yesterday, disclosed that the Federal Government spent $1billion (about N310 billion) on kerosene subsidy in 2015. 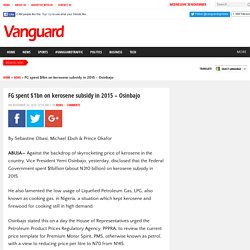 Only 161,640 customers metered in 10 months - Report. Electricity: 2.9m customers still without metre - ANED. By Sebastine Obasi THREE years after the privatisation of the power sector, not less than 2.9 million customers are still without electricity meters, the Association of Nigerian Electricity Distributors, ANED, Executive Director, Research and Advocacy, Sunday Oduntan said. 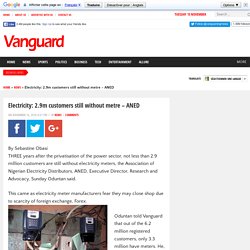 This came as electricity meter manufacturers fear they may close shop due to scarcity of foreign exchange, Forex. Oduntan told Vanguard that out of the 6.2 million registered customers, only 3.3 million have meters. He, however, said enumeration is still on-going to capture more customers and have better industry statistics. Meter manufacturers who import some of the needed machinery have been lamenting their inability to access Forex to meet their needs. Power generation hits 3483.7MW » TODAY.ng. The Nigerian Electricity System Operator (SO) Tuesday said that Nigerian Electricity Supply Industry (NESI) at the 06:00hours on Tuesday produced 3,483.7 Mega Watts (MW). 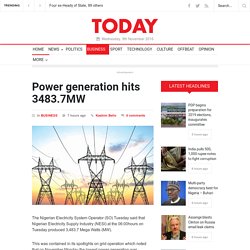 This was contained in its spotlights on grid operation which noted that on November Monday the lowest power generation was 2,970.1MW, while peak generation was 3,819.2MW. It added that the highest frequency on Monday was 51.34Hz and lowest frequency was 48.46Hz. The highest voltage recorded on that day was 357KV and the lowest voltage 295 KV. Nigeria signs agreements to add more than 500 megawatts to national grid. A power labourer fixes electric cables on a pole in Ojodu district in Nigeria's commercial capital Lagos. Photo: Akintunde Akinleye/Reuters Nigeria has signed agreements to add more than 500 megawatts of capacity to its national grid, the office of the vice president said on Thursday. Africa's most populous nation produces less than 4,000 megawatts (MW) but requires around 10 times that amount to guarantee power for its 180 million inhabitants.

Chronic power shortages have hindered the country's development for decades and are one of the biggest constraints on investment and growth in Africa's largest economy, which is in recession for the first time in more than 20 years. The vice president's office said a number of agreements had been signed including ones with the World Bank and Niger Delta Power Holding Company (NDPHC). The vice president said the agreements would open up new opportunities for investments in Nigeria's gas and power sectors. Four million Nigerians awaiting prepaid meter - NERC - Daily Post Nigeria - Nigeria Today.

Nigerian govt. targets 7,000MW of electricity by 2017 – Osinbajo. Vice-President Yemi Osinbajo said on Monday that the Federal Government was planning to generate 7, 000 megawatts of electricity within the next 18 months. The vice president stated this at the presentation of a book “Nigeria: The Challenges of Growth and Development, an In-Depth Analysis by Experts,” held at the Trenchard Hall, University of Ibadan, Ibadan. Mr. Osinbajo said power remains a major challenge the Federal Government had been facing, and which the government was determined to solve. He said the most important part of the budget would focus on ensuring that the weak aspect of the power value chain was restored. Mr. “Early in the life of this administration late last year and early this year, power generation was possibly at its best.

Nigerian govt. targets 7,000MW of electricity by 2017 – Osinbajo. 2.9 million households not metered, says NERC. The 11 Electricity Distribution Companies (AEDC) in Nigeria are yet to meter about 2.9 million households since they began operating the network on November 1, 2013. Nigerian Electricity Regulatory Commission (NERC) made this disclosure in a statement yesterday in Abuja while meeting with the DisCos to evaluate their performance on the Credited Advance Payment for Metering Initiative (CAPMI).

According to the Statistics, of the 403,255 meters procured since 2013, customers financed the installation of 251,531 meters which is about 100,000 higher than what the DisCos have procured as at March this year. Although the companies signed a pact with the Bureau of Public Enterprises (BPE) and NERC to close the three million metering gap over two years ago, they have failed to reach even 200,000 . Data submitted by the 11 DisCos to NERC indicates that there are 6.159million customers’ accounts as at December last year with 3.206miilon metered.

Nigeria eyeing 1,000 MW of electricity from coal by 2020 — Fayemi. *Great prospects in non-oil economy *Solid minerals earned N400bn in 2015 By YINKA KOLAWOLE Nigeria is expected to generate 1000 mega watts of electricity from coal by year 2020 to supplement other sources of energy currently in use in the country. Dr. FG blames pipeline vandals as power generation drops to 2,800MW. *As NERC, DISCOs flout court order on tariff hike By Chris Ochayi ABUJA—The Federal Government, yesterday, lamented incidences of vandalism on the gas pipelines, which it said led to drastic reduction in peak power supply through the national grid from over 5,000 megawatts to less than 2,800 megawatts. The acting Chief Executive Officer of the Nigerian Electricity Regulatory Commission, NERC, Dr. Nigeria: Electricity - Law Demands All Customers to Be Metered From 2020.