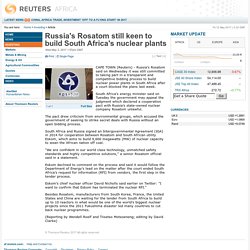 South Africa's energy minister said on Tuesday the government may appeal the judgment which declared a cooperation pact with Russia's state-owned nuclear company Rosatom unlawful. The pact drew criticism from environmental groups, which accused the government of seeking to strike secret deals with Russia without an open bidding process. South Africa and Russia signed an Intergovernmental Agreement (IGA) in 2014 for cooperation between Rosatom and South African utility Eskom, which aims to build 9,600 megawatts (MW) of nuclear capacity to wean the African nation off coal. 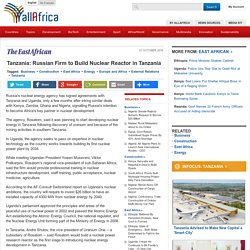 The agency, Rosatom, said it was planning to start developing nuclear energy in Tanzania following discovery of uranium and because of the mining activities in southern Tanzania. In Uganda, the agency seeks to pass on expertise in nuclear technology as the country works towards building its first nuclear power plant by 2034. Nigeria: Russia to Establish Nuclear Centre in Nigeria - Pan African Visions. The Russian Ambassador to Nigeria, Amb. 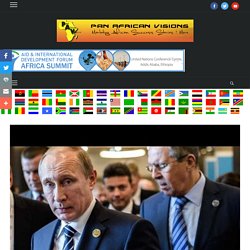 Nikolay Udovichenko, on Saturday announced that the Nigerian and Russian Governments plan to sign an agreement for the establishment of a multifunctional scientific research nuclear centre in Nigeria. Udovichenko, who disclosed this in Lagos at this year’s Alumni Congress of the Soyuznik Alumni Association in Nigeria, said that the Nigerian and Russian governments had been negotiating for the centre’s establishment. The theme of the congress was “Harnessing The Potentials of the Nigerian Graduates of Higher Institutions of former USSR States”. “Bilateral cooperation between Nigeria and Russia is blessed with huge potential in every avenue. “Nuclear energy development is another area with good prospects for our two countries’ cooperation. “This June, we expect to sign a bilateral agreement for the establishment of a multifunctional scientific centre in Nigeria,” he said. *Allafrica Comments. Maroc-Portugal: projet ambitieux d'interconnexion électrique. 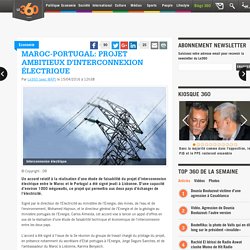 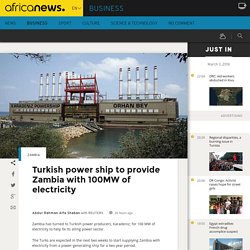 The Turks are expected in the next two weeks to start supplying Zambia with electricity from a power-generating ship for a two year period. Turkish power ship to supply electricity to Zambia: Turkey's Karadeniz will in the next two weeks begin supply… EngineeringNews (@EngNewsZA) March 3, 2016 One of the company’s vessels is currently docked at Mozambique’s Nacala port, from where the power will be generated before being transmitted via a grid to Zambia. The company builds floating power stations which plug into electricity grids after berthing, the power stations also known as power badges run on fuel oil but can also be operated with natural gas. By this move, Zambia follows the lead of West African neighbours, Ghana; who are benefiting from a 225 MW facility since last year. Russia signs deal to build Egypt's first nuclear plant. MOSCOW - Russia signed two agreements on Thursday to finance and build Egypt's first nuclear power plant, in a ceremony attended by President Abdel Fattah al-Sisi. 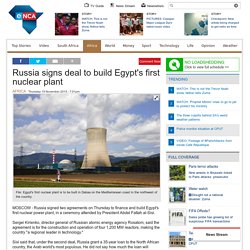 Sergei Kirienko, director general of Russian atomic energy agency Rosatom, said the agreement is for the construction and operation of four 1,200 MW reactors, making the country "a regional leader in technology. " Sisi said that, under the second deal, Russia grant a 35-year loan to the North African country, the Arab world's most populous. He did not say how much the loan will amount to or what its terms are. Sisi announced the project in February during a visit by Russian President Vladimir Putin, when a memorandum of understanding was signed. British investors flood Cameroon’s energy sector. Cameroon’s energy sector is now dominated by British investments, both in terms of prospects and actual production. 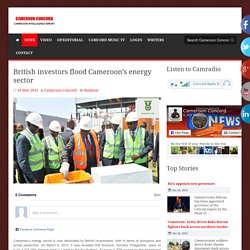 On March 6, 2015, it was revealed that Eranove, formerly Finagestion, plans to build a 315 MW thermal plant in Limbé in the South-West. Eranove is 57%-owned by the investment fund Emerging Capital Partners (ECP). In this international investment fund, which manages 1.8 billion FCFA in assets in Africa, the British government’s pro-development institute, the Commonweath Development Corporation (CDC), has a few assets. Rosatom announces plans to construct reactors in Dabaa nuclear plant in Egypt. A Russian nuclear firm Rosatom Corporation has announced plans to construct four Reactors in Dabaa nuclear plant in Egypt. 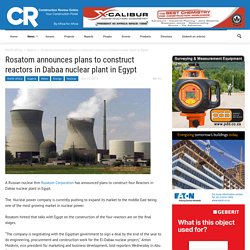 The Nuclear power company is currently pushing to expand its market to the middle East being one of the most growing market in nuclear power. Rosatom hinted that talks with Egypt on the construction of the four reactors are on the final stages. “The company is negotiating with the Egyptian government to sign a deal by the end of the year to do engineering, procurement and construction work for the El-Dabaa nuclear project,” Anton Moskvin, vice president for marketing and business development, told reporters Wednesday in Abu Dhabi. Russian and Egyptian officials are discussing terms of a loan for the construction work. Rosatom is upbeat that once the contract is signed it can be completed in in 2022. 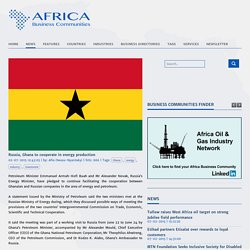 A statement issued by the Ministry of Petroleum said the two ministers met at the Russian Ministry of Energy during, which they discussed possible ways of meeting the provisions of the two countries’ Intergovernmental Commission on Trade, Economic, Scientific and Technical Cooperation. It said the meeting was part of a working visit to Russia from June 22 to June 24 by Ghana’s Petroleum Minister, accompanied by Mr Alexander Mould, Chief Executive Officer (CEO) of the Ghana National Petroleum Corporation; Mr Theophilus Ahwireng, CEO of the Petroleum Commission, and Dr Kodzo K. 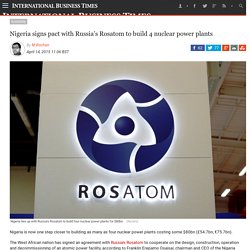 The West African nation has signed an agreement with Russia's Rosatom to cooperate on the design, construction, operation and decommissioning of an atomic power facility, according to Franklin Erepamo Osaisai, chairman and CEO of the Nigeria Atomic Energy Commission. The first nuclear plant will be operational in 2025. It will be increased to four plants with a total capacity of 4,800 megawatts by 2035, with each facility costing $20bn, according to Osaisai, Bloomberg reported. One megawatt can power 2,000 average European homes or nearly 333 in Japan. Majority stake. Russia to help build Egypt's first nuclear power plant. The presidents of Russia and Egypt have announced after talks in Cairo, that the two countries are to build Egypt's first nuclear power plant together, as well as boosting natural gas trade among other deals.

Vladimir Putin and Abdel Fattah el-Sisi made the announcement on Tuesday at a joint news conference in the Egyptian capital, where they signed an agreement on the plant's construction. "If final decisions are made, it will mean not just building a nuclear power plant, it means the creation of the entire new atomic industry in Egypt," said Putin. The plant would be built at the existing nuclear site in Dabaa, on the Mediterranean coast west of the port city of Alexandria, where a research reactor has stood for years.

Putin's landmark two-day visit, during which he was feted with much pomp and pageantry, came as Russia faces heightened tensions with Washington and the European Union over Moscow's backing of armed separatist rebels in Ukraine. Security issues. Russia to Supply Eight Nuclear Reactors to South Africa by 2023. In a £31m ($50 million) strategic partnership, Russia's Federal Agency on Atomic Energy, Rosatom, confirmed on Monday that it will supply up to eight nuclear reactors to South Africa by 2023. Rosatom agency noted that the delivery of the reactors will establish the first nuclear power plant based on Russian technology on the African continent. The deal is estimated to be valued between £24 - £31bn with a single reactor costing around three billion pounds, according to the Itar-Tass Russian news agency.

The partnership agreement was signed in Vienna. Energy in Africa, Infrastructure Development - ABDAS. The European Commission has announced on 1 April, the results of the first call for proposals of an innovative programme for providing finance to bring electricity to the world’s poorest citizens. This initiative also shows that the EU has been a leader in the campaign to provide Sustainable Energy for All.

Grants of €95 million have been awarded for 16 projects across nine African countries to provide access to energy in rural areas, an amount which will be translated into projects costing more than €155 million (through co-financing support by applicants) and bring electricity to more than 2 million people. Commissioner Piebalgs said: “This shows that real results are being delivered and that the EU is scaling up proven successful projects which have a high impact on poverty reduction through sustainable rural electrification.

Energy is fundamental for every area of development; from creating jobs and boosting growth to improving healthcare and enabling people to cook safely. Africa needs $40 billion to plug energy gap—EU - business. The European Union Special Representative to the African Union, Gary Quince said on Wednesday in Addis Ababa that Africa needs $40 billion in annual investment to meet the 2040 Infrastructure Development in Africa (PIDA)’s energy sufficiency target of 700GW from the current 125GW.Quince, who spoke at opening of a two-day second high level ministerial meeting of the Africa-EU Energy Partnership (AEEP), a framework established for energy cooperation between the two continents to offer a platform for dialogue and coordination of energy development. 110607_gtz_aeep_commun-paper_fr_rz_05.indd - aeep_commun-paper_fr_rz_05_ES_web.pdf.

Big European gas deal for Africa. Abuja, Nigeria - Nigeria, Algeria and Niger have signed an agreement to create a $10bn pipeline that would ship gas across the Saharan desert to Europe, Nigeria's state oil company said Friday. The plan comes as Europe seeks new sources of gas imports as it currently depends on Russia for much of its needs. The project was approved by energy ministers from all three governments, said Mohammed Barkindo, the managing director of Nigeria state oil company, the Nigeria National Petroleum Corporation. It is expected to come on line in 2015.

"The inter-governmental agreement that has been signed today between the government of Algeria, Niger and Nigeria gives this project official stamp of approval," Barkindo said. "So it is a significant milestone. " Nigeria's energy minister, Rilwanu Lukmanu, said the countries are now looking for partners for the project.