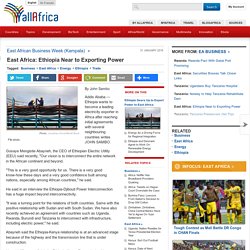 Gosaye Mengistie Abayneh, the CEO of Ethiopian Electric Utility (EEU) said recently, "Our vision is to interconnect the entire network in the African continent and beyond. "This is a very good opportunity for us. There is a very good know-how these days and a very good confidence built among nations, especially among African countries," he said. He said in an interview the Ethiopia-Djibouti Power Interconnection has a huge impact beyond interconnectivity. "It was a turning point for the relations of both countries. Abayneh said the Ethiopia-Kenya relationship is at an advanced stage because of the highway and the transmission line that is under construction. He said the government is aiming to develop a middle-income country by 2025.

One geothermal venture underway will produce some 500MW. Kenya: transmission infrastructure struggling to meet demand. Kenya needs to improve its transmission system to allow for the extra generation capacity to serve the demand In East Africa, managing director of the Kenya Electricity Generating Company (KenGen), Albert Mugo, stated that efforts to boost power generation in the country will mean nothing without an upgrade of the ailing transmission infrastructure. 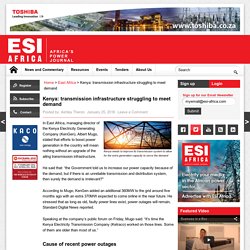 He said that: “the Government told us to increase our power capacity because of the demand, but if there is an unreliable transmission and distribution system, then surely the demand is irrelevant? " According to Mugo, KenGen added an additional 360MW to the grid around five months ago with an extra 370MW expected to come online in the near future. He stressed that as long as old, faulty power lines exist, power outages will remain, Standard Digital News reported. Speaking at the company’s public forum on Friday, Mugo said: “It’s time the Kenya Electricity Transmission Company (Ketraco) worked on those lines. On Thursday, Nairobi, Coast and Mt. PhotoEssay » The Tatek Transformer Factory is Transforming Ethiopia's Energy Sector. Ethiopia purchased 1,660 electric transformers from Sri Lankan company. 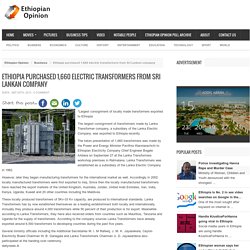 The token presentation of 1,660 transformers was made by the Power and Energy Minister Pavithra Wanniarachchi to Ethiopian Electricity Company Chief Engineer Bogale AAbera on September 27 at the Lanka Transformers workshop premises in Ratmalana. Lanka Transformers was established as a subsidiary of the Lanka Electric Company in 1982. However, later they began manufacturing transformers for the international market as well. Accordingly in 2002 locally manufactured transformers were first exported to Iraq. These locally produced transformers of 5Kv-33 Kv capacity, are produced to international standards. Several ministry officials including the Additional Secretaries M. (Visited 90 times, 2 visits today) Ethiopia plans electricity access expansion. Ethiopia plans to increase its current reported access to electricity from 51% to 75% of the country’s population by 2015. 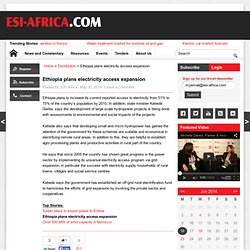 In addition, state minister Kebede Gerba, says the development of large scale hydropower projects is being done with assessments to environmental and social impacts of the projects. Kebede also says that developing small and micro hydropower has gained the attention of the government for these schemes are suitable and economical in electrifying remote rural areas. In addition to this, they are helpful to establish agro processing plants and productive activities in rural part of the country.

He says that since 2005 the country has shown great progress in the power sector by implementing its universal electricity access program via grid expansion, in particular the success with electricity supply households of rural towns, villages and social service centres. Israel’s power company takes over EEPCo. Ethiopia Likely to Attain of 10,000MW Generation Capacity in 3 Years Time. Ethiopia’s ambition of producing 8,000 to 10,000MW of electric power seems viable in the coming three years. 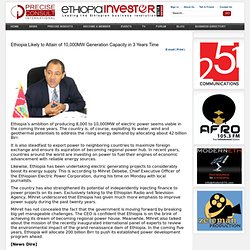 The country is, of course, exploiting its water, wind and geothermal potentials to address the rising energy demand by allocating about 42 billion Birr. It is also steadfast to export power to neighboring countries to maximize foreign exchange and ensure its aspiration of becoming regional power hub. In recent years, countries around the world are investing on power to fuel their engines of economic advancement with reliable energy sources. Likewise, Ethiopia has been undertaking electric generating projects to considerably boost its energy supply. This is according to Mihret Debebe, Chief Executive Officer of the Ethiopian Electric Power Corporation, during his time on Monday with local journalists. Puma Energy Interested in Investing in Ethiopia. 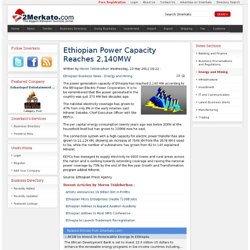 It is to be remembered that the power generated in the country was just 370 MW two decades ago. The national electricity coverage has grown to 47% from only 8% in the early nineties said Miheret Debebe, Chief Executive Officer with the EEPCo. The per capital energy consumption twenty years ago was below 20KW at the household level but has grown to 100KW now he said.