At Home in the Modern World: Modern Design & Architecture. In honor of our family themed July/August issue, we've invited guest writer Paige Johnson, who spearheads the blog Playscapes, to share her perspective on some of the most innovative contemporary design targeted to kids. 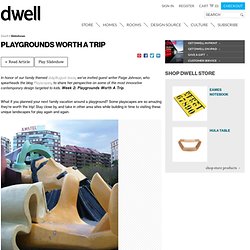 Week 2: Playgrounds Worth A Trip. What if you planned your next family vacation around a playground? Some playscapes are so amazing they're worth the trip! Stay close by, and take in other area sites while building in time to visiting these unique landscapes for play again and again. Parque Gulliver in Valencia, Spain, is a monumental play sculpture depicting the moment that Gulliver is captured by the Lilliputians. Copenhagen's Kiddie City is Urban Shangri-La for Little People. For kids 0 to 18, one architecture firm is taking the concept of growing up in a city to a whole new level. 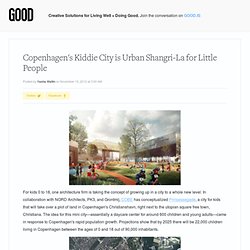 In collaboration with NORD Architects, PK3, and Grontmij, COBE has conceptualized Prinsessegade, a city for kids that will take over a plot of land in Copenhagen's Christianshavn, right next to the utopian square free town, Christiana. The idea for this mini city—essentially a daycare center for around 600 children and young adults—came in response to Copenhagen's rapid population growth. Projections show that by 2025 there will be 22,000 children living in Copenhagen between the ages of 0 and 18 out of 90,000 inhabitants. When it is complete in 2014, Prinsessegade will be the largest daycare center in Denmark.

It will feature different neighborhoods for different age groups, houses, public spaces, squares, parks, even a city hall, fire station, stadium, and factory. According to the architects: Photos courtesy of COBE.

Assessment instruments for early childhood and child care program quality. National Association for the Education of Young Children. Forest kindergarten. A forest kindergarten is a type of preschool education for children between the ages of three and six that is held almost exclusively outdoors. 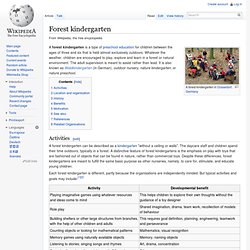 Whatever the weather, children are encouraged to play, explore and learn in a forest or natural environment. The adult supervision is meant to assist rather than lead. It is also known as Waldkindergarten (in German), outdoor nursery, nature kindergarten, or nature preschool. Activities[edit] A forest kindergarten can be described as a kindergarten "without a ceiling or walls".

Each forest kindergarten is different, partly because the organisations are independently minded. Location and organisation[edit] Forest kindergartens operate mainly in woodland, although some other sites can be equally inspiring, for example beaches and meadows. Children are encouraged to dress for the weather, with waterproof clothes and warm layers, according to the climate. 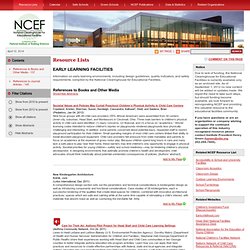 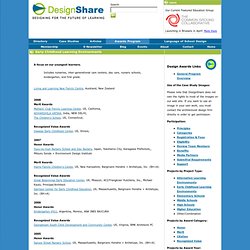