The War of 1812 in Animated and Google Maps. A More Perfect Union - Home. Lewis and Clark . Inside the Corps . To Equip an Expedition. Once he was named by President Thomas Jefferson to head the Corps of Discovery, Meriwether Lewis began preparations for the long trip ahead. 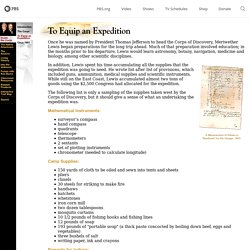 Much of that preparation involved education; in the months prior to his departure, Lewis would learn astronomy, botany, navigation, medicine and biology, among other scientific disciplines. In addition, Lewis spent his time accumulating all the supplies that the expedition was going to need. He wrote list after list of provisions, which included guns, ammunition, medical supplies and scientific instruments. While still on the East Coast, Lewis accumulated almost two tons of goods using the $2,500 Congress had allocated for the expedition. The following list is only a sampling of the supplies taken west by the Corps of Discovery, but it should give a sense of what an undertaking the expedition was. Mathematical Instruments: Camp Supplies: Presents for Indians: Clothing: 45 flannel shirts coats frocks shoes woolen pants blankets knapsacks stockings. AP US History PowerPoints.

US History Overview 1: Jamestown to the Civil War. Teaching Modules. The following book discusses the Jeffersonian Presidency in light of the Louisiana Purchase. 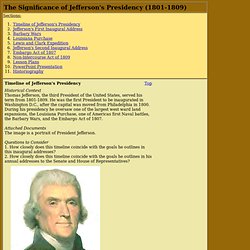 The author attempts to prove the conditions for Yeomen and slaves and Jefferson's arrogance prevented compromise in respect to the Louisiana Purchase that may have prevented the US Civil War. Kennedy, Roger G. Mr. Jefferson's Lost Cause: Land, Farmers, Slavery and the Louisiana Purchase. New York: Oxford University Press, 2003. The following book, written following a deep reading of the Lewis and Clark journals, reexamines the narrative of their expedition, casting events and characters in a new light. Slaughter, Thomas P. 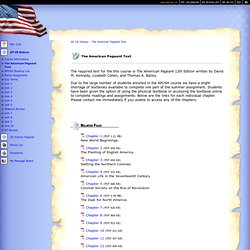 Kennedy, Lizabeth Cohen, and Thomas A. Bailey. Due to the large number of students enrolled in the APUSH course we have a slight shortage of textbooks available to complete one part of the summer assignment. Students have been given the option of using the physical textbook or accessing the textbook online to complete readings and assignments. Chapter 1 (PDF 1.21 MB)New World Beginnings Chapter 2 (PDF 658 KB)The Planting of English America Chapter 3 (PDF 600 KB)Settling the Northern Colonies Chapter 4 (PDF 932 KB)American Life in the Seventeenth Century Chapter 5 (PDF 686 KB)Colonial Society on the Eve of Revolution Chapter 6 (PDF 0.99 MB)The Duel for North America Chapter 7 (PDF 426 KB) Chapter 8 (PDF 868 KB) The American Pageant, 12th Edition Textbook Notes. Best Sites for Primary Documents in US History.

Common Core offers an incentive for teachers to use historic documents to build literacy skills in a content area while empowering students to be the historian in the classroom. 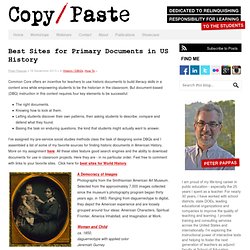 But document-based (DBQ) instruction in this context requires four key elements to be successful: The right documents. Knowing how to look at them. Letting students discover their own patterns, then asking students to describe, compare and defend what they found. Basing the task on enduring questions, the kind that students might actually want to answer. I've assigned my pre-service social studies methods class the task of designing some DBQs and I assembled a list of some of my favorite sources for finding historic documents in American History. 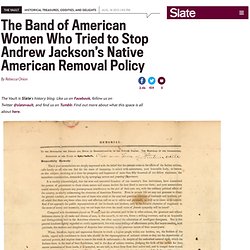 Like us on Facebook, follow us on Twitter @slatevault, and find us on Tumblr. Find out more about what this space is all about here. More than 60 women from Steubenville, Ohio, signed this 1830 petition begging Congress to reconsider Andrew Jackson’s plan to remove southern Native Americans beyond the Mississippi. Stunning Shipwrecks From War of 1812 Invaded by Mussels. Andrew Jackson should be kicked off the $20 bill: He ordered a genocide. Image courtesy Library of Congress My public high school wasn’t the best, but we did have an amazing history teacher. 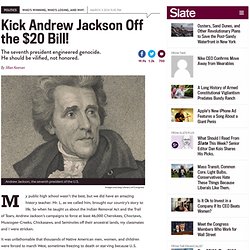 Mr. L, as we called him, brought our country’s story to life. Native American history: Government chart tallying civic costs to date in 1894. The Vault is Slate's history blog. 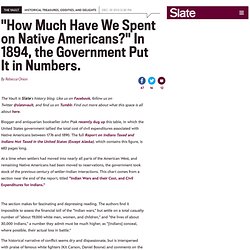 Like us on Facebook, follow us on Twitter @slatevault, and find us on Tumblr. Find out more about what this space is all about here. At a time when settlers had moved into nearly all parts of the American West, and remaining Native Americans had been moved to reservations, the government took stock of the previous century of settler-Indian interactions. This chart comes from a section near the end of the report, titled “Indian Wars and their Cost, and Civil Expenditures for Indians.” The section makes for fascinating and depressing reading.

The historical narrative of conflict seems dry and dispassionate, but is interspersed with praise of famous white fighters (Kit Carson, Daniel Boone) and comments on the undue ferocity of Indian opposition (“In the battle of January 17, 1873, in the Modoc war, the Modoc women moved over the battlefield and dispatched the wounded soldiers by beating out their brains”). Open Library/Internet Archive.