Suffer the children: SA’s inequality strikes hardest where it hurts the most. The ‘fatherless’ on Father’s Day: Voices from the Cape Flats. By Rebecca Helman In the lead up to Father’s Day on June 21, I’ve been thinking about how important it is for us to redefine who fathers are. 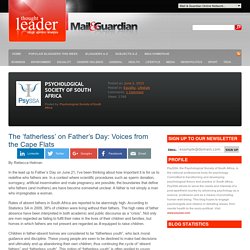 In a context where scientific procedures such as sperm donation, surrogacy, artificial insemination and male pregnancy are possible, the boundaries that define who fathers (and mothers) are have become somewhat unclear. A father is not simply a man who impregnates a woman. Pregnant mothers with strong family support less likely to have postpartum depression. Women who receive strong social support from their families during pregnancy appear to be protected from sharp increases in a particular stress hormone, making them less likely to experience depression after giving birth, a new study by UCLA life scientists indicates. 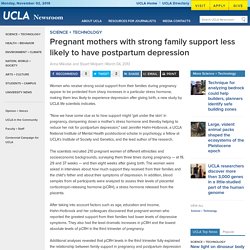 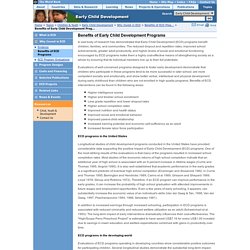 The reduced dropout and repetition rates, improved school achievements, greater adult productivity, and higher levels of social and emotional functioning encouraged by ECD programs make them a highly cost-effective means of strengthening society as a whole by ensuring that its individual members live up to their full potentials. Evaluations of well-conceived programs designed to foster early development demonstrate that children who participate in these programs tend to be more successful in later school, are more competent socially and emotionally, and show better verbal, intellectual and physical development during early childhood than children who are not enrolled in high quality programs. Benefits of ECD interventions can be found in the following areas: ECD programs in the United States ECD programs in the developing world.

Five Numbers to Remember About Early Childhood Development - Center on the Developing Child at Harvard University. Learn how the numbers illustrate such concepts as the importance of early childhood to the learning, behavior, and health of later life and why getting things right the first time is easier and more effective than trying to fix them later. 700 New Neural Connections Per Second The early years matter because, in the first few years of life, 700 new neural connections are formed every second. 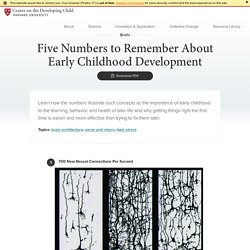 Association of Child Poverty, Brain Development, and Academic Achievement. Poverty may affect the growth of children’s brains. Stark and rising inequality plagues many countries, including the United States, and politicians, economists, and—fortunately—scientists, are debating its causes and solutions. 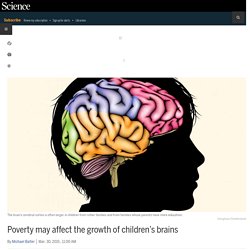 But inequality’s effects may go beyond simple access to opportunity: a new study finds that family differences in income and education are directly correlated with brain size in developing children and adolescents. The findings could have important policy implications and provide new arguments for early antipoverty interventions, researchers say. Researchers have long known that children from families with higher socioeconomic status do better on a number of cognitive measures, including IQ scores, reading and language batteries, and tests of so-called executive function—the ability to focus attention on a task. The genius of babies. Now playing MIT researcher Deb Roy wanted to understand how his infant son learned language — so he wired up his house with videocameras to catch every moment (with exceptions) of his son's life, then parsed 90,000 hours of home video to watch "gaaaa" slowly turn into "water. 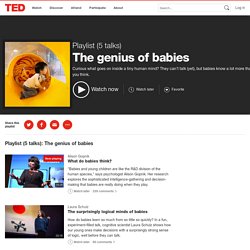 " Astonishing, data-rich research with deep implications for how we learn.

Theconversation. If one were to measure an education system’s strength purely on access, South Africa would be a schooling success story. 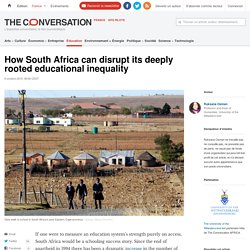 Since the end of apartheid in 1994 there has been a dramatic increase in the number of children attending primary and secondary school. University enrolments are also up. Government has used policy to forcefully change patterns of school access that were highly racialised during apartheid. It has prioritised teacher development and is trying to create norms and standards for school infrastructure.

It should be commended for this work. But for all of this progress, educational inequality remains deeply entrenched. French economist Thomas Pikkety, who on October 3 delivered the 13th Nelson Mandela Annual Lecture in Johannesburg, has written extensively about inequality in education. Enough short term thinking. Crime in South Africa: What’s going wrong? Institute for Security Studies (ISS) researcher Chandre Gould says she has been interviewing men in South African prisons in order to try to understand “the problem that, I think, bothers most of us”. 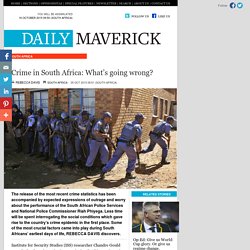 That problem is: what is it that causes people to turn to crime and violence? We know that it’s not just poverty, because poorer countries than South Africa do not have to deal with similarly acute crime epidemics. “Inequality”, similarly, seems too simplistic an answer. Psyche of the nation: A report from inside the mind of a public-sector child psychologist. 1. 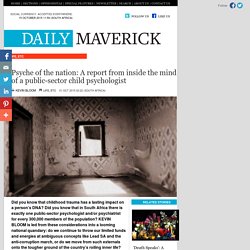 Out of bounds, out of reach The scene: a pavement café in suburban Johannesburg, the sun in its early summer luminescence, the street a favourite of that caste of South African male whose car and/or motorbike is an unconscious expression of his chronically undeveloped psyche. The question (put to you by the person you have come here to meet): “We can’t use words like ‘damaged’, ‘needy’, ‘abandoned’ or ‘destitute’ because that would compound the psychological problems these children face in later life. At the same time, how do we create awareness – or raise funding – without using these words?” No doubt, it’s this disconnect between the context and the question that highlights the profundity of both. “Shame,” as Carl Jung once said, “is a soul-eating emotion.” And so to restate the Catch-22: how are awareness and funding raised when the mental healthcare of South Africa’s minors implies non-negotiable terms of confidentiality?