Last Child in the Woods - Overview - Richard Louv. In this influential work about the staggering divide between children and the outdoors, child advocacy expert Richard Louv directly links the lack of nature in the lives of today's wired generation—he calls it nature-deficit—to some of the most disturbing childhood trends, such as the rises in obesity, attention disorders, and depression. 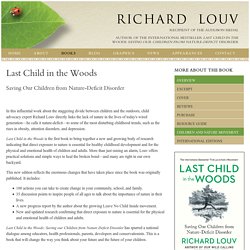 Last Child in the Woods is the first book to bring together a new and growing body of research indicating that direct exposure to nature is essential for healthy childhood development and for the physical and emotional health of children and adults. More than just raising an alarm, Louv offers practical solutions and simple ways to heal the broken bond—and many are right in our own backyard. This new edition reflects the enormous changes that have taken place since the book was originally published.

It includes: Saving Kids from 'Nature Deficit Disorder' Curbing Childhood Obesity: An FPT Framework for Action to Promote Healthy Weights. U.S. kids outweigh Canadian kids, says study. Rates of obesity among children and teenagers in the U.S. have increased substantially more than in Canada since the late 1970s, according to a new report by the Centers for Disease Control and Prevention. 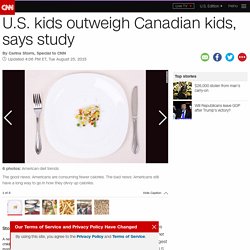 Although the growing obesity epidemic in the U.S. is well known, this report shines a light on how we compare to our neighbors to the north, said Cynthia L. Ogden, an epidemiologist at the CDC's National Center for Health Statistics and lead author of the new study. The report found that, whereas the obesity rate among children between 3 and 19 was about 5% in both the U.S. and Canada in the late 1970s, it rose to 17.5% in the U.S. by 2012 and only 13% in Canada by 2013. However in both countries, the rates have leveled off in the last 10 years. 31% of Canadian kids are overweight or obese - Health. Almost a third of Canadians aged five to 17 are overweight or obese, Statistics Canada finds. 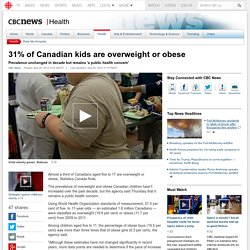 The prevalence of overweight and obese Canadian children hasn't increased over the past decade, but the agency said Thursday that it remains a public health concern. Using World Health Organization standards of measurement, 31.5 per cent of five- to 17-year-olds — an estimated 1.6 million Canadians — were classified as overweight (19.8 per cent) or obese (11.7 per cent) from 2009 to 2011. Among children aged five to 11, the percentage of obese boys (19.5 per cent) was more than three times that of obese girls (6.3 per cent), the agency said. "Although these estimates have not changed significantly in recent years, more data points are needed to determine if the pace of increase in prevalence is slowing, as has been observed in some countries," the report concludes. 'Easy to get calories' CBC medical contributor Dr. 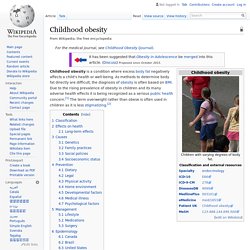 As methods to determine body fat directly are difficult, the diagnosis of obesity is often based on BMI. Overweight and obesity in children and adolescents: Results from the 2009 to 2011 Canadian Health Measures Survey. View the most recent version. 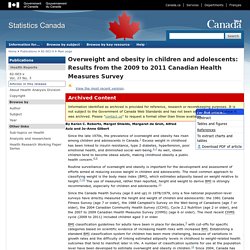 Archived Content Information identified as archived is provided for reference, research or recordkeeping purposes. It is not subject to the Government of Canada Web Standards and has not been altered or updated since it was archived. Please "contact us" to request a format other than those available. Obesity in Canada - Healthy Living. To share this page just click on the social network icon of your choice. 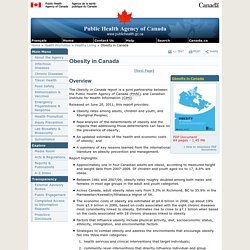 [Next Page] Overview The Obesity in Canada report is a joint partnership between the Public Health Agency of Canada (PHAC) and Canadian Institute for Health Information (CIHI). Released on June 20, 2011, this report provides: Causes and consequences of childhood obesity. By Denis Daneman, MB, BCh, FRCP(C) and Jill Hamilton, MD, FRCPC Overweight and obesity in children and youth are increasing at an astounding rate throughout the world. 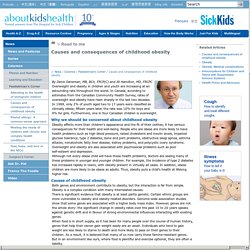 In Canada, according to estimates from the Canadian Community Health Survey, rates of overweight and obesity have risen sharply in the last two decades. In 1989, only 2% of youth aged two to 17 years were classified as clinically obese; fifteen years later, the rate was 10% for boys and 9% for girls. Obesity in Canada - Healthy Living. To share this page just click on the social network icon of your choice. 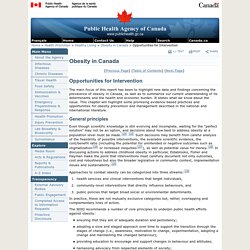 [Previous Page] [Table of Contents] [Next Page] The main focus of this report has been to highlight new data and findings concerning the prevalence of obesity in Canada, as well as to summarize our current understanding of its determinants and the health and economic burden. It states what we know about the issue. Statistics Canada. Obesity Prevention. Childhood obesity has both immediate and long-term effects on health and well-being. 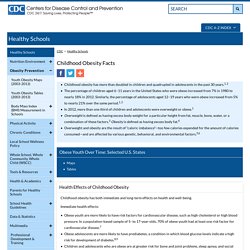 Immediate health effects: Obese youth are more likely to have risk factors for cardiovascular disease, such as high cholesterol or high blood pressure. In a population-based sample of 5- to 17-year-olds, 70% of obese youth had at least one risk factor for cardiovascular disease.7 Obese adolescents are more likely to have prediabetes, a condition in which blood glucose levels indicate a high risk for development of diabetes.8,9 Children and adolescents who are obese are at greater risk for bone and joint problems, sleep apnea, and social and psychological problems such as stigmatization and poor self-esteem.5,6,10.

Obesity and physical activity in children. Backgrounder: Obesity trends in Canada. Prepared for EvidenceNetwork.ca by Banaz Al-khalidi Obesity by the numbers. 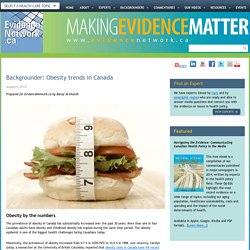 Save Our Children: Battling Childhood Obesity in Canada. Photography from iStockphoto.com “I’m a little bit fat,” said the eight-year-old, looking away while I adjusted the adult small life jacket around her belly. “Oh no, Sweetie, don’t say that! You have a good, strong build!” I replied cheerfully, wondering how many times she’d heard that before. Because the truth is, she was fat. When we grab life jackets for the Grade 3 students taking the water safety course I volunteer with, we lifeguards make quick judgments on size: child, youth or, for a few per class, adult small or adult medium. We tuck the adult life jackets into the kid-and-youth pile, and grab them discretely to minimize embarrassment, but c’mon, the linings of adult life jackets aren’t the same colour.

It's Your Health - Obesity [Health Canada, 2006] It's Your Health This article was produced in collaboration with the Public Health Agency of Canada. Help on accessing alternative formats, such as Portable Document Format (PDF), Microsoft Word and PowerPoint (PPT) files, can be obtained in the alternate format help section. On this page: The Issue The number of Canadians who are overweight or obese has increased dramatically over the past 25 years. Background. Obesity in Canadian children. Childhood Overweight and Obesity. Skip directly to search Skip directly to A to Z list Skip directly to navigation Skip directly to page options Skip directly to site content Get Email Updates To receive email updates about this page, enter your email address: About Us.

Preventing Obesity in Children, Causes of Child Obesity, and More. Up to one out of every five children in the U. S. is overweight or obese, and this number is continuing to rise. International Journal of Obesity - Is the Canadian childhood obesity epidemic related to physical inactivity? Child Obesity Epidemic: Research Studies and Facts. In February of this year, First Lady Michelle Obama presented her ambitious Let’s Move campaign to battle the terrifying childhood obesity epidemic. Lady Obama was inspired not only from her family and children’s lifestyle, but also by some startling obesity statistics that have been gathered by medical researchers over the past thirty years.

A child is considered obese if their BMI (Body Mass Index) is 30 or higher, and this BMI level in anyone, especially children has the potential to cause very severe health issues. Recent studies using DEXA scanning devices show that this number is probably much higher than originally thought. There is no better time to solve the obesity issues among America’s children, and the adults of every generation.