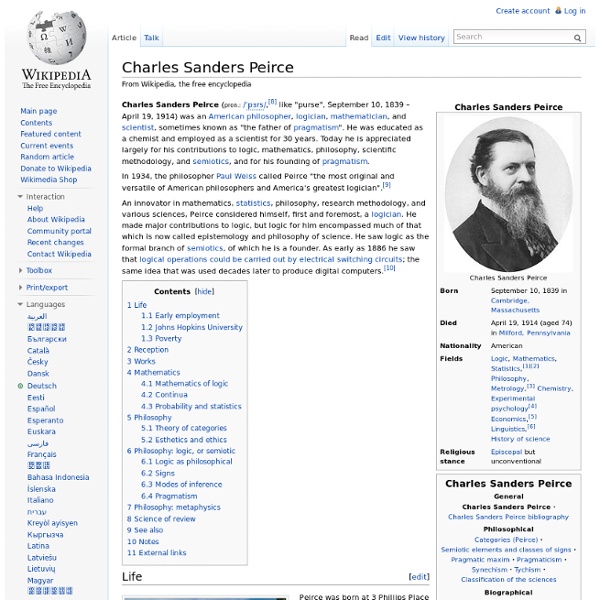 Charles Sanders Peirce (/ˈpɜrs/,[9] like "purse", September 10, 1839 – April 19, 1914) was an American philosopher, logician, mathematician, and scientist, sometimes known as "the father of pragmatism". He was educated as a chemist and employed as a scientist for 30 years. Today he is appreciated largely for his contributions to logic, mathematics, philosophy, scientific methodology, and semiotics, and for his founding of pragmatism. An innovator in mathematics, statistics, philosophy, research methodology, and various sciences, Peirce considered himself, first and foremost, a logician. He made major contributions to logic, but logic for him encompassed much of that which is now called epistemology and philosophy of science. Life[edit] Peirce's birthplace. Peirce suffered from his late teens onward from a nervous condition then known as "facial neuralgia", which would today be diagnosed as trigeminal neuralgia. Early employment[edit] Johns Hopkins University[edit] Poverty[edit] Related:  groupement

Peirce's Theory of Signs 1. Basic Sign Structure In one of his many definitions of a sign, Peirce writes: I define a sign as anything which is so determined by something else, called its Object, and so determines an effect upon a person, which effect I call its interpretant, that the later is thereby mediately determined by the former. (EP2, 478) What we see here is Peirce's basic claim that signs consist of three inter-related parts: a sign, an object, and an interpretant. 1.1 The Signifying Element of Signs The very first thing to note is that there are some potential terminological difficulties here. Peirce's idea that a sign does not signify in all respects and has some particular signifying element is perhaps best made clear with an example. 1.2 The Object Just as with the sign, not every characteristic of the object is relevant to signification: only certain features of an object enable a sign to signify it. The sign is the molehill, and the object of this sign is the mole. 1.3 The Interpretant 3. 3.2 Objects

William James William James (January 11, 1842 – August 26, 1910) was an American philosopher and psychologist who was also trained as a physician. The first educator to offer a psychology course in the United States,[2] James was one of the leading thinkers of the late nineteenth century and is believed by many to be one of the most influential philosophers the United States has ever produced, while others have labelled him the "Father of American psychology".[3][4][5] Along with Charles Sanders Peirce and John Dewey, he is considered to be one of the greatest figures associated with the philosophical school known as pragmatism, and is also cited as one of the founders of the functional psychology. He also developed the philosophical perspective known as radical empiricism. James' work has influenced intellectuals such as Émile Durkheim, W. E. B. Early life[edit] William James was born at the Astor House in New York City. He took up medical studies at The Harvard Medical School in 1864. Career[edit]

What is Semiotics? by Eugene Gorny When people find out that I am a specialist in semiotics and that I even give lectures in this subject at the University, they always say, "tell me, what is semiotics?" In the course of time, it became clear to me that this is the normal reaction of normal people to the word "semiotics" itself. Every time as I tried to answer the question and to explain the point of the business I do, I have found that it is not easy at all. Three definitions Perhaps, the most widespread, canonical definition of semiotics is the definition by subject: "Semiotics is a science of signs and/or sign systems". Long ago St. On the other hand, something which is usually perceived as a sign, can in some occasions be perceived (and used) as a simple thing. In brief, there exist a great number of conditions that determine where and when we consider or do not consider a certain thing as a sign (and vice versa). Therefore, semiotics is a means of considering anything as signs and sign systems.

George Herbert Mead George Herbert Mead (1863–1931) was an American philosopher, sociologist and psychologist, primarily affiliated with the University of Chicago, where he was one of several distinguished pragmatists. He is regarded as one of the founders of social psychology and the American sociological tradition in general. Biography[edit] Mead was born February 27, 1863 in South Hadley, Massachusetts. He was raised in a Protestant, middle-class family comprising his father, Hiram Mead, his mother, Elizabeth Storrs (Billings) Mead, and his sister Alice. In autumn 1887, Mead enrolled at Harvard University, where his main interests were philosophy and psychology. In 1891 he married Helen Kingsbury Castle (1860–1929), the sister of Henry Northrup Castle (1862–1895), a friend he met at Oberlin.[2] Despite never finishing his dissertation, Mead was able to obtain a post at the University of Michigan in 1891. Writings[edit] Pragmatism and symbolic interaction[edit] Social philosophy (behaviorism)[edit]

Euphemism A euphemism is a generally innocuous word or expression used in place of one that may be found offensive or suggest something unpleasant.[1] Some euphemisms are intended to amuse; while others use bland, inoffensive, and often misleading terms for things the user wishes to dissimulate or downplay. Euphemisms are used for dissimulation, to refer to taboo topics (such as disability, sex, excretion, and death) in a polite way, and to mask profanity.[2] The opposite of euphemism roughly equates to dysphemism. Euphemisms may be used to avoid words considered rude, while still conveying their meaning; words may be replaced by similar-sounding words, gentler words, or placeholders. Some euphemisms have become accepted in certain societies for uncomfortable information; for example, in many English speaking countries, a doctor is likely to say "the patient passed away" rather than "the patient died". Etymology[edit] Formation[edit] Phonetic modification[edit] Figures of speech[edit] Rhetoric[edit]

Bayes' theorem A blue neon sign, showing the simple statement of Bayes's theorem In probability theory and statistics, Bayes' theorem (alternatively Bayes' law or Bayes' rule) relates current to prior belief. It also relates current to prior evidence. When applied, the probabilities involved in Bayes' theorem may have any of a number of probability interpretations. Bayes's theorem is named after Rev. Sir Harold Jeffreys put Bayes' algorithm and Laplace's formulation on an axiomatic basis. Introduction[edit] Bayes's theorem is stated mathematically as the following simple form:[1] For proposition A and evidence or background B, P(A), the prior probability, is the initial degree of belief in A.P(A|B), the conditional probability, is the degree of belief in A, having taken B into account.the quotient P(B|A)/P(B) represents the support B provides for A. Another form of Bayes's Theorem that is generally encountered when looking at two competing statements or hypotheses is: For an epistemological interpretation:

Hubert Dreyfus Hubert Lederer Dreyfus (born October 15, 1929) is an American philosopher and professor of philosophy at the University of California, Berkeley. Dreyfus is featured in Tao Ruspoli's film Being in the World. He was elected a Fellow of the American Academy of Arts and Sciences in 2001 and is a recipient of the Harbison Prize for Outstanding Teaching at UC Berkeley.[2] Erasmus University awarded Dreyfus an honorary doctorate "for his brilliant and highly influential work in the field of artificial intelligence, and for his equally outstanding contributions to the analysis and interpretation of twentieth century continental philosophy".[3][4] Background[edit] In 1965, while teaching at Massachusetts Institute of Technology, Dreyfus published "Alchemy and Artificial Intelligence", an attack on the work of Allen Newell and Herbert A. Dreyfus's criticism of AI[edit] Dreyfus's critique of artificial intelligence (AI) concerns what he considers to be the four primary assumptions of AI research.

Semantic change Examples[edit] Awful—Originally meant "inspiring wonder (or fear)". Used originally as a shortening for "full of awe", in contemporary usage the word usually has negative meaning.Demagogue—Originally meant "a popular leader". It is from the Greek dēmagōgós "leader of the people", from dēmos "people" + agōgós "leading, guiding". (George Chauncey, in his book Gay New York, would put this shift as early as the late 19th century among a certain "in crowd" knowledgeable of gay night life.) Types of semantic change[edit] A number of classification schemes have been suggested for semantic change. However, the categorization of Blank (1998) has gained increasing acceptance:[2] Blank considers it problematic, though, to include amelioration and pejoration of meaning as well as strengthening and weakening of meaning. Forces triggering semantic change[edit] Blank[3] has tried to create a complete list of motivations for semantic change. Practical studies[edit] Theoretical studies[edit] See also[edit]

Jürgen Habermas Biography[edit] Habermas was born in Düsseldorf, Rhine Province, in 1929. He was born with a cleft palate and had corrective surgery twice during childhood.[4] Habermas argues that his speech disability made him think differently about the importance of communication and prefer writing over the spoken word as a medium.[5] From 1956 on, he studied philosophy and sociology under the critical theorists Max Horkheimer and Theodor Adorno at the Goethe University Frankfurt's Institute for Social Research, but because of a rift between the two over his dissertation—Horkheimer had made unacceptable demands for revision—as well as his own belief that the Frankfurt School had become paralyzed with political skepticism and disdain for modern culture[6]—he finished his habilitation in political science at the University of Marburg under the Marxist Wolfgang Abendroth. Habermas then returned to his chair at Frankfurt and the directorship of the Institute for Social Research. Teacher and mentor[edit]