Behind the scenes, early history

The resonance of Occupy. 24 November 2014Last updated at 05:37 ET By Lucy Townsend BBC News Magazine Activists from the Occupy movement held their latest campaign in London this weekend. 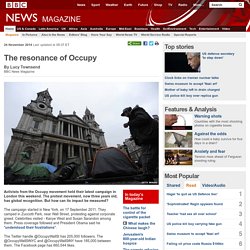 The protest movement, now three years old, has global recognition. But how can its impact be measured? The campaign started in New York, on 17 September 2011. They camped in Zuccotti Park, near Wall Street, protesting against corporate greed. The Twitter handle @OccupyWallSt has 205,000 followers. The initial action spawned hundreds of similar protests around the world. The protest was widely followed by the press and discussed in parliament.

Yes Lab: APEC World Leaders Dinner Gets Occupied. November 13, 2011FOR IMMEDIATE RELEASE APEC World Leaders Dinner Gets OccupiedWithin secure zone, musician sings on behalf of the many Video and photos belowLyrics Honolulu - A change in the programmed entertainment at last night's Asia-Pacific Economic Cooperation (APEC) gala left a few world leaders slack-jawed, though most seemed not to notice that anything was amiss. 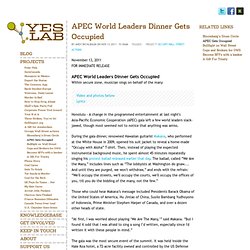 During the gala dinner, renowned Hawaiian guitarist Makana, who performed at the White House in 2009, opened his suit jacket to reveal a home-made “Occupy with Aloha” T-shirt. Then, instead of playing the expected instrumental background music, he spent almost 45 minutes repeatedly singing his protest ballad released earlier that day. Those who could hear Makana’s message included Presidents Barack Obama of the United States of America, Hu Jintao of China, Susilo Bambang Yudhoyono of Indonesia, Prime Minister Stephen Harper of Canada, and over a dozen other heads of state. The gala was the most secure event of the summit. 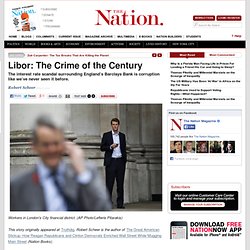 Workers in London's City financial district. (AP Photo/Lefteris Pitarakis) This story originally appeared at Truthdig. Robert Scheer is the author of The Great American Stickup: How Reagan Republicans and Clinton Democrats Enriched Wall Street While Mugging Main Street (Nation Books). Krugman: Panic of the Plutocrats NYTimes. And this reaction tells you something important — namely, that the extremists threatening American values are what F.D.R. called “economic royalists,” not the people camping in Zuccotti Park. 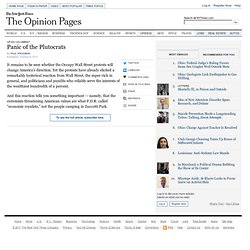 Consider first how Republican politicians have portrayed the modest-sized if growing demonstrations, which have involved some confrontations with the police — confrontations that seem to have involved a lot of police overreaction — but nothing one could call a riot. And there has in fact been nothing so far to match the behavior of Tea Party crowds in the summer of 2009. Nonetheless, Eric Cantor, the House majority leader, has denounced “mobs” and “the pitting of Americans against Americans.” The G.O.P. presidential candidates have weighed in, with Mitt Romney accusing the protesters of waging “class warfare,” while Herman Cain calls them “anti-American.” And if you were listening to talking heads on CNBC, you learned that the protesters “let their freak flags fly,” and are “aligned with Lenin.” Molly Shapes History - #OccupyLSX.