Leaders: Is it all about you? Check yourself with these warning signs. Pete Ryan Leadership requires you to be present to the needs, abilities, and potential of other people — and to respond quickly and strategically to those signals. 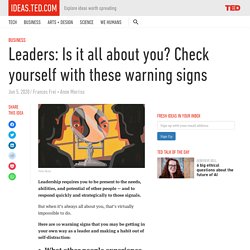 But when it’s always all about you, that’s virtually impossible to do. Here are 10 warning signs that you may be getting in your own way as a leader and making a habit out of self-distraction: 1. What other people experience rarely occurs to you. The path to empowering other people starts with curiosity about what they’re thinking, feeling and doing. 2. A measurable indicator of your interest in others is the number of questions you ask them or at least want to ask them. 5 Leadership Styles for Effective Management. By Tracey Maurer What kind of leader are you? 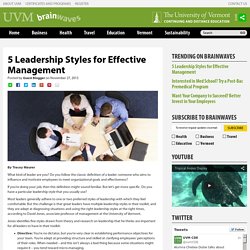 Do you follow the classic definition of a leader: someone who aims to influence and motivate employees to meet organizational goals and effectiveness? If you’re doing your job, then this definition might sound familiar. But let’s get more specific. 8 Common Leadership Styles - Associations Now Magazine. 8 Common Leadership Styles Associations Now, January 2013 , Feature By:Rhea Blanken, FASAE There is a time and place for all leadership styles. 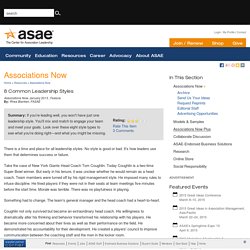 No style is good or bad. It's how leaders use them that determines success or failure. Take the case of New York Giants Head Coach Tom Coughlin. Something had to change. Coughlin not only survived but became an extraordinary head coach. Four Types of Leaders. Effective leaders believe that individuals, organizations, and even nations possess undiscovered talents and untapped resources. 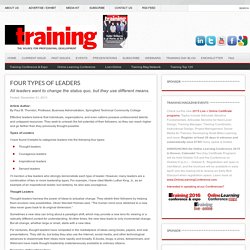 They seek to unleash the full potential of their followers, so they can reach higher and go farther than they previously thought possible. Types of Leaders I have found it helpful to categorize leaders into the following four types: Leadership Styles. Lessons in Leadership A leadership guide featuring step-by-step how-tos, Wall Street Journal stories and video interviews with CEOs. 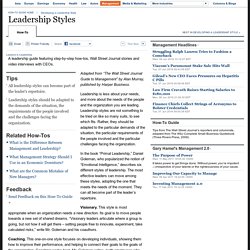 Adapted from “The Wall Street Journal Guide to Management” by Alan Murray, published by Harper Business. Leadership is less about your needs, and more about the needs of the people and the organization you are leading. Leadership styles are not something to be tried on like so many suits, to see which fits. Rather, they should be adapted to the particular demands of the situation, the particular requirements of the people involved and the particular challenges facing the organization. Leadership Styles based on Myers Briggs/Jungian theory. MMDI™ Leadership Styles Based on Myers Briggs/Jungian theory There are eight leadership styles in the MMDI™ system (which is based on the theories of Isabel Briggs Myers and C.G. 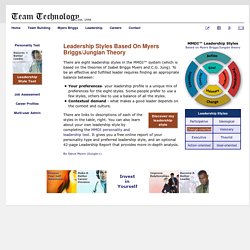 Jung). To be an effective and fulfilled leader requires finding an appropriate balance between: Your preferences- your leadership profile is a unique mix of preferences for the eight styles. There are links to descriptions of each of the styles in the table, right. By Steve Myers (Google+). Six Emotional Leadership Styles. Disciplines > Leadership > Six Emotional Leadership Styles Visionary | Coaching | Affiliative | Democratic | Pace-setting | Commanding | See also Daniel Goleman, Richard Boyatzis and Annie McKee, in Primal Leadership, describe six styles of leading that have different effects on the emotions of the target followers. 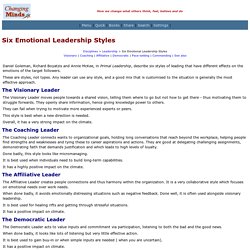 These are styles, not types. Any leader can use any style, and a good mix that is customised to the situation is generally the most effective approach. Types of Leadership Styles: An Essential Guide. By Murray Johannsen. (March 9, 2014). Feel free to connect with the author by Linkedin, Google+ or by email. This article lists 20 different leadership styles. 7 Steps to a Truly Effective Leadership Style. 10 Traits Of Great Business Leaders. Character and Traits in Leadership. Managers are people who do things right, while leaders are people who do the right thing. — Warren Bennis, Ph.D. 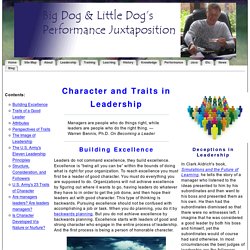 On Becoming a Leader Building Excellence Leaders do not command excellence, they build excellence. Excellence is “being all you can be” within the bounds of doing what is right for your organization. I was a workplace bully, until it cost me my job. My aggressive style served me well as a consultant. 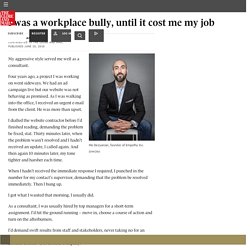 Four years ago, a project I was working on went sideways. We had an ad campaign live but our website was not behaving as promised. As I was walking into the office, I received an urgent e-mail from the client. He was more than upset. Six Components of a Great Corporate Culture. The benefits of a strong corporate culture are both intuitive and supported by social science. 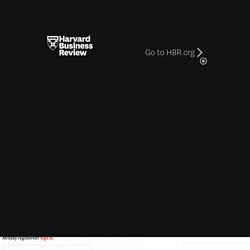 According to James L. Heskett, culture “can account for 20-30% of the differential in corporate performance when compared with ‘culturally unremarkable’ competitors.” And HBR writers have offered advice on navigating different geographic cultures, selecting jobs based on culture, changing cultures, and offering feedback across cultures, among other topics. Identifying, Ranking, and Sharing Management Ideas. What Is Leadership? What is leadership, anyway? Such a simple question, and yet it continues to vex popular consultants and lay people alike. I’ve now written several books on leadership for employee engagement, and yet it occurred to me that I never actually paused to define leadership.

What Makes a Leader? Executive Summary Reprint: R0401H When asked to define the ideal leader, many would emphasize traits such as intelligence, toughness, determination, and vision—the qualities traditionally associated with leadership.

IMMEDIATE ACTION BY DRILL SERGEANT. Marine Corps Leadership Traits. The 14 leadership traits are qualities of thought and action which, if demonstrated in daily activities, help Marines earn the respect, confidence, and loyal cooperation of other Marines. It is extremely important that you understand the meaning of each leadership trait and how to develop it, so you know what goals to set as you work to become a good leader and a good follower. JUSTICEDefinition: Justice is defined as the practice of being fair and consistent.

A just person gives consideration to each side of a situation and bases rewards or punishments on merit. Suggestions for Improvement: Be honest with yourself about why you make a particular decision. Avoid favoritism. Military Leadership. Military leadership is the process of influencing others to accomplish the mission by providing purpose, direction, and motivation. Command is the authority a person in the military service lawfully exercises over subordinates by virtue of his rank and assignment or position. The basic responsibilities of a leader are: Accomplishment of the mission and the welfare of the soldiers. The most fundamental and important organizational technique used by military is the chain of command. The chain of command is the sequence of commanders in an organization who have direct authority and primary responsibility for accomplishing the assigned unit mission while caring for personnel and property in their charge.

A military leader has three types of duties: -Specified duties -Directed duties -Implied duties. Generalship: 10 Traits of General Officers that Every Leader Needs. “Luck is of little moment to the great general, for it is under the control of his intellect and his judgment.”Titus Livins The Allies just lost over 10,000 service members at the Chosin Reservoir in late 1950 and retreated back to the original positions they held before the battles began. The blame for such tragic losses was attributed to poor leadership—more specifically, at the generals in charge.

RP0103. Six Personality Traits of a Leader. There are dozens of personal traits that can affect leadership and some, namely integrity and character, that are absolute. Why the Military Produces Great Leaders. Leadership in the Classroom. Seven Strong Claims about Successful School Leadership. The Best Ways a Teacher Can Demonstrate Leadership in the Classroom? Effective leadership in the classroom, according to Theo Wubbels (@thwubbels), one of the world’s most respected experts in the area of teacher training and teacher-student relationships, “depends on healthy and productive interpersonal relationships between teachers and students. In such relationships, students feel close to their teacher and they trust and value him or her. From the perspective of teachers’ behaviors, this implies that teachers show a good mix of agency and communion in the classroom.” Naturally, this “mix” will vary from situation to situation. However, Leadership, Theo believes, “depends on the teacher’s capacity to adapt.”

The Eight Characteristics Of Effective School Leaders. The Eight Qualities of Successful School Leaders. What Makes a Great School Leader? This is the time of year when, for many different reasons, some teachers consider taking positions at other schools. I've received a number of calls from friends and colleagues this spring asking for my advice on this difficult decision.