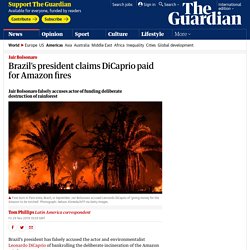 Jair Bolsonaro – a populist nationalist who has vowed to drive environmental NGOs from Brazil – made the claim on Friday, reportedly telling supporters: “This Leonardo DiCaprio’s a cool guy, isn’t he? Giving money for the Amazon to be torched.” The spurious accusation – for which Brazil’s president offered no proof – came 24 hours after Bolsonaro made a similarly unsubstantiated claim in a Facebook live broadcast.

“Leonardo DiCaprio, dammit, you’re collaborating with the burning of the Amazon,” Bolsonaro declared, accusing the actor of being part of an international “campaign against Brazil”. The firefighters were released on Thursday amid widespread public outrage at their treatment and questions over the police investigation. WWF’s Brazil office rejected those claims. 11/27/19: Illinois expected to cap insulin cost-sharing at $100 per month. Welcome to this week’s round-up of state-level health reform news, including: Illinois expected to cap insulin cost-sharing at $100 per month as of 2021 Earlier this year, Colorado became the first state in the country to limit how much state-regulated insurers can require members to pay for insulin; the state’s $100/month cap takes effect in January. 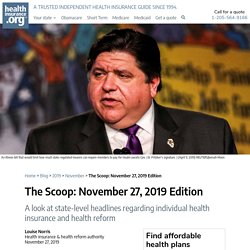 Illinois is now on the brink of enacting a similar bill, which would take effect in 2021. Illinois S.B.667 was approved by lawmakers earlier this month, and awaits Gov. J.B. Tennessee submits modified proposal for Medicaid block grant funding Tennessee has not expanded Medicaid under the ACA. BYU-Idaho will continue to allow students to rely on Medicaid For the last few weeks – in this edition of The Scoop and this edition – we’ve been talking about BYU-Idaho’s controversial decision to stop allowing students with Medicaid to waive coverage in the school’s health plan as of 2020. 11/25: US trips still in Syria. 11/15/19: Key Takeaways From Marie Yovanovitch’s Hearing in the Impeachment Inquiry. “Impeachment by its nature, it’s a political process.” 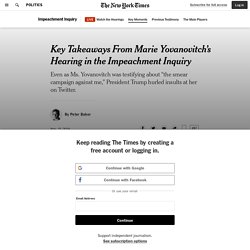 “What people think is going to happen can turn out to be very different from what happens.” “Because it has to do with elected officials holding another elected official to account for their conduct.” When the framers of the Constitution created a process to remove a president from office, they were well … kind of vague. So to understand how it’s going to play out, the past is really our best guide. 11/6/19: RNC paid for more than 10,000 phone calls to House Dems as part of its anti-impeachment push. The Republican National Committee funded a campaign that flooded the offices of about 36 House Democrats with more than 10,000 anti-impeachment phone calls in recent weeks. 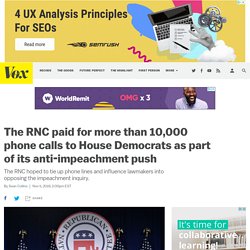 The campaign, first reported by the New York Times, is just one part of the very diffuse defense Republicans have launched in an effort to shield President Donald Trump from a growing impeachment inquiry. Its goal, as reportedly described at a recent dinner of Republican aides, was to both tie up Democratic lawmakers’ telephone lines and attempt to influence them into opposing that inquiry.

While the strategies used by Republicans — including denying quid pro quo is wrong, attacking the whistleblower whose complaint led to the inquiry, and, despite evidence suggesting the opposite, that a White House memo of a call between Trump and Ukrainian President Volodymyr Zelensky is exculpatory — have been varied, they largely focus on the claims that Trump did nothing wrong and that Democrats are being unfair. 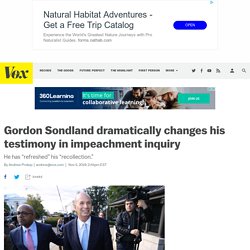 US Ambassador to the European Union Gordon Sondland said in a declaration submitted to Congress on Monday that he had now “refreshed [his] recollection about certain conversations in early September 2019.” Specifically, Sondland now remembers that he did, in fact, tell various people — including a Ukrainian official — that President Donald Trump’s administration was linking hundreds of millions of dollars in withheld military aid for Ukraine to investigations Trump had asked the country to conduct. “I now recall speaking individually with Mr. Yermak, where I said that resumption of U.S. aid would likely not occur until Ukraine provided the public anti-corruption statement that we had been discussing for many weeks,” Sondland said.