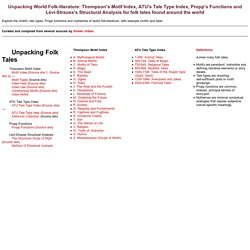 Curated and compiled from several sources by Shawn Urban. Unpacking Folk Tales Lévi-Strauss Structural Analysis Definitions Across many folk tales, Home - Folk Tale and Folk Motif Indexes - Library Guides at University of Missouri Libraries. If you are trying to find a motif or type for a particular folk tale, you do not have an easy job. 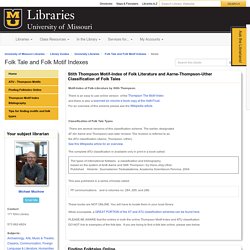 Finding Thompson Motifs For the Thompson Motif index, look at this help section for a explanation of the categories and help in finding motifs. If you need a motif for a Grimm's Fairy Tale or for a well-known folk tale, try the Folk Tales Online section. You can find the ATU type for Grimm's Fairy Tale and then find the ATU number in the ATU-AT-Motif sections. Cinderella. Aarne-Thompson-Uther folktale type 510A and related stories of persecuted heroines translated and/or edited by D. 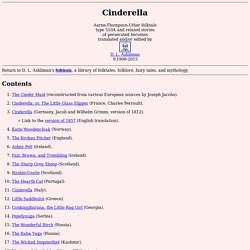 L. Ashliman ©1998-2015 Return to D. L. Sur La Lune. Books I also have an Amazon Listmania list of most of the books mentioned on this page at Women and Fairy Tales. 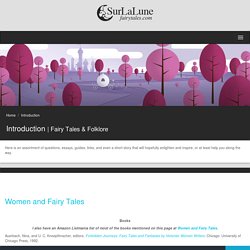 Auerbach, Nina, and U. C. A Casual Girl's Guide to Using the ATU Index - Retelling the Tales. One of the most important tools for anyone studying fairy tales or just looking to research them for creative purposes has to be the ATU system. 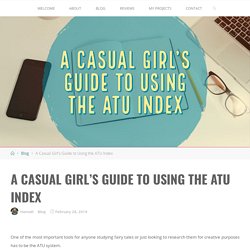 Okay. Maybe it isn’t the most important. But it’s incredibly helpful. But what is it? Most people haven’t heard of it, and truthfully it sounds a bit confusing and daunting to use. The Fairytale Heroine’s Journey. When I first started developing my ideas about the Fairytale Heroine’s Journey, I wrote an article for Faerie Magazine describing that journey and its various stages. 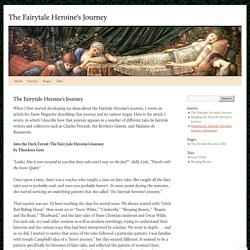 As I continued developing my ideas about the Fairytale Heroine’s Journey, I decided to present an academic paper at the International Conference on the Fantastic in the Arts. I wanted to make sure that my research supported my theories and arguments. Here is the paper I presented. A handout of relevant quotations can be found on a separate page, under the next menu item. Into the Dark Forest: Mapping the Fairytale Heroine’s Journey by Theodora Goss Since the publication of Joseph Campbell’s The Hero with a Thousand Faces and the popularization of his concept of a “hero’s journey,” described on the cover of the New World Library edition as “a universal motif of adventure and transformation that runs through virtually all of the world’s mythic traditions,” attempts have been made to formulate a similarly universal “heroine’s journey.”

Fairy tales – Malcolm's Round Table. How could Red Riding Hood Have been so very good And still keep the wolf from the door? 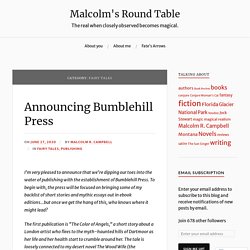 – from A. P. Randolph’s 1926 hit song. Watch Kurt Vonnegut demystify story structure with a fairy tale and a piece of chalk - Nieman Storyboard. A couple of years ago, in a Storyboard piece on John McPhee‘s gorgeously built Encounters with the Archdruid, the acclaimed author Adam Hochschild wrote about narrative structure: A few years ago I was with a young cousin, a college student who told me she was majoring in civil engineering. 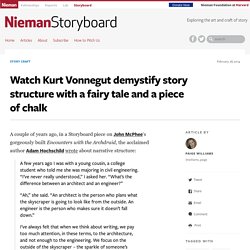 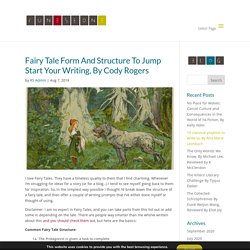 They have a timeless quality to them that I find charming. Whenever I’m struggling for ideas for a story (or for a blog…) I tend to see myself going back to them for inspiration. So, in the simplest way possible I thought I’d break down the structure of a fairy tale, and then offer a couple of writing prompts that I’ve either done myself or thought of using. Disclaimer: I am no expert in Fairy Tales, and you can take parts from this list out or add some in depending on the tale. The Bare-Bones Structure of a Fairy Tale – Malcolm's Round Table. Most authors who use mythic elements in their work are familiar with the hero’s journey structure introduced by Joseph Campbell in the 1940s.

Campbell’s sequence of steps in a journey from beginning to end has been criticized by some for missing important aspects of themes, contexts and cultures, and over-used by others to explain the plots of all movies and plays. Nonetheless, it’s a handy structure. See updates at the end of this post. The first fairytales were feminist critiques of patriarchy. We need to revive their legacy. Most revolutions begin quietly, in narrative. Take, for instance, fairytales. The popular understanding is that fairytales evolved exclusively from oral folktellers – from the uneducated “Mother Goose” nurse, passing into the imaginations of children by centuries of fireside retellings.

But this story is a myth. Fairytales were invented by the blue blood and pomaded sweat of a coterie of 17th century French female writers known as the conteuses, or storytellers. The originator of the term “fairytale”, Baroness Marie Catherine d’Aulnoy, didn’t need another hero when she published the very first fairytale in 1690. Fairy tale. Fictional story typically featuring folkloric fantasy characters and magic Fairy tales occur both in oral and in literary form; the name "fairy tale" ("conte de fées" in French) was first ascribed to them by Madame d'Aulnoy in the late 17th century.

Many of today's fairy tales have evolved from centuries-old stories that have appeared, with variations, in multiple cultures around the world.[5] The history of the fairy tale is particularly difficult to trace because only the literary forms can survive. Still, according to researchers at universities in Durham and Lisbon, such stories may date back thousands of years, some to the Bronze Age more than 6,500 years ago.[6][7] Fairy tales, and works derived from fairy tales, are still written today. Folklorists have classified fairy tales in various ways. The Aarne-Thompson classification system and the morphological analysis of Vladimir Propp are among the most notable. Kurt Vonnegut Diagrams the Shape of All Stories in a Master’s Thesis Rejected by U. Chicago.

“What has been my prettiest contribution to the culture?” Asked Kurt Vonnegut in his autobiography Palm Sunday. His answer? His master’s thesis in anthropology for the University of Chicago, “which was rejected because it was so simple and looked like too much fun.” The elegant simplicity and playfulness of Vonnegut’s idea is exactly its enduring appeal. The idea is so simple, in fact, that Vonnegut sums the whole thing up in one elegant sentence: “The fundamental idea is that stories have shapes which can be drawn on graph paper, and that the shape of a given society’s stories is at least as interesting as the shape of its pots or spearheads.”

Fairy tales, fables and folk tales. Thompson Motifs - ATU-AT-Motif - Library Guides at University of Missouri Libraries. These pages bring the ATU and AT Type Classifications together with the Thompson Motifs. THERE ARE NO LINKS TO THE FOLK TALES themselves. Look here if you are trying to locate online folk tales by ATU Type. The AT Classification The core of the list comes from the AT classification numbers and headings used by D.L.

Women Illustrators from the Golden Age of Fairy Tales. Oh, Disney, You Never Should Have Fired Kay Nielsen. The Dark, Enchanted Worlds of Illustrator Kay Nielsen. Once Upon a Time: The Brothers Grimm. An introduction to The Bloody Chamber and Other Stories. Happily Ever After: Revealed. Where do fairy tales come from? - BBC Culture. Reading Fairy Tales: Where to Start. Transforming Our Understanding of Fairy Tales. Little Red Riding Hood and the wolf. FaTaTh. A Closer Look At Traditional Fairy Tales and Modern Adaptations: A Lamar University Critical Edition - Home. The Irresistible Psychology of Fairy Tales. Welcome - Retelling the Tales.

Littlemermaid. Lesson Plan Rapunzel. 7 Parts Of The Grimms Brothers' 'Rapunzel' That Will Shock You (Or At Least Strike You As Slut-Shaming) How a Smithsonian researcher reinterpreted Rumpelstiltskin for the #MeToo era. Once Upon a Time: The Brothers Grimm. In The Original Sleeping Beauty, The King Is A Sexual Harasser Who Forces Himself On The Princess.