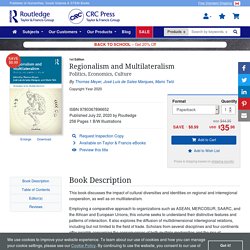 China trying to copy Japan in regional primacy. From Yekaterinburg to Brasilia: BRICS and the G20, road to nowhere? Introduction The BRICS differ from one another culturally, politically, and demographically. 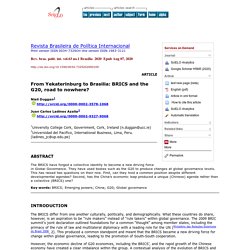 What these countries do share, however, is an aspiration to be “rule makers” instead of “rule takers” within global governance. The 2009 BRIC summit’s joint declaration outlined foundations for a common “thought” among member states, including the primacy of the rule of law and multilateral diplomacy with a leading role for the UN (Ministério das Relações Exteriores do Brasil 2008, 2). This produced a common standpoint and meant that the BRICS became a new driving force for change within global governance, leading to the promotion of South-South cooperation. However, the economic decline of G20 economies, including the BRICS’, and the rapid growth of the Chinese economy have created a clear imbalance within the group.

Coronavirus Showed How Globalization Broke the World. The coronavirus that caused SARS was hosted by bats and palm civets. 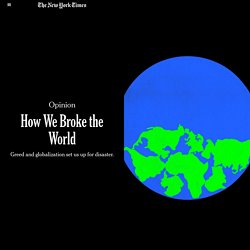 It jumped to humans because we had been pushing and pushing high-density urban population centers more deeply into wilderness areas, destroying that natural buffer and replacing it with monoculture crops and concrete. When you simultaneously accelerate development in ways that destroy more and more natural habitats and then hunt for more wildlife there, “the natural balance of species collapses due to loss of top predators and other iconic species, leading to an abundance of more generalized species adapted to live in human-dominated habitats,” Johan Rockstrom, the chief scientist at Conservation International, explained to me. These include rats, bats, palm civets and some primates, which together host a majority of all known viruses that can be passed on to humans.

This may be the basis for a study that looks at when states manage to put other distracting issues "aside" and cooperation in one issue area while they are at more or less intense conflict with the same partner(s) on another issue. case in point is RCEP, in which India raises domestic issues not to be able to cooperation but the suspition is that it is actually because of its conflict with China that it will not joint the same trade agreement: On the other hand there is Australia, which sies very much with the US on some issues, especially in maritime security and the Quad, but on the other hand continues to emphasize that this will not harm the conclusion of RCEP: – sant1826

RCEP the key to East Asia's recovery. The Asean-led Regional Comprehensive Economic Partnership (RCEP) will almost certainly be signed at the 37th Asean Summit in November. 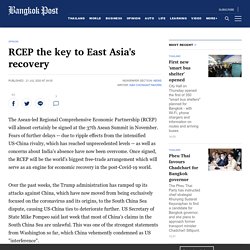 Fears of further delays -- due to ripple effects from the intensified US-China rivalry, which has reached unprecedented levels -- as well as concerns about India's absence have now been overcome. Once signed, the RCEP will be the world's biggest free-trade arrangement which will serve as an engine for economic recovery in the post-Covid-19 world. Over the past weeks, the Trump administration has ramped up its attacks against China, which have now moved from being exclusively focused on the coronavirus and its origins, to the South China Sea dispute, causing US-China ties to deteriorate further.

US Secretary of State Mike Pompeo said last week that most of China's claims in the South China Sea are unlawful. This was one of the strongest statements from Washington so far, which China vehemently condemned as US "interference". RCEP , technology and trade regionalism. Huawei and TikTok are at the forefront of a new drift to regionalism – many others will follow. Huawei and TikTok were two of the most successful examples of globalisation. 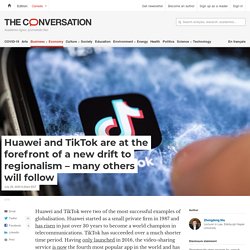 Huawei started as a small private firm in 1987 and has risen in just over 30 years to become a world champion in telecommunications. TikTok has succeeded over a much shorter time period. Having only launched in 2016, the video-sharing service is now the fourth most popular app in the world and has achieved 1.9 billion downloads worldwide. Both of these Chinese companies are now at the mercy of a widening geopolitical divide.

The US has led an increasingly successful campaign to eliminate Huawei from the global market over alleged security fears, and is threatening to ban TikTok too. These developments are signs of attempts by the US to decouple from China’s economy and concentrate on alliances within its own political and economic sphere.