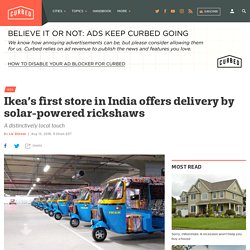 Earlier this month, the company opened its first ever store in India, and while it has many of the traits of a typical Ikea store—the sprawling layout, cafe, Hemnes bed—it also has a distinctly local flavor. Take its new delivery vehicles. At least 20 percent of the Hyderabad store’s delivery fleet will be electric rickshaws. The compact, three-wheeled vehicles are used widely throughout India to navigate the notoriously dense traffic found in large cities. France to set penalties on goods packaged with non-recycled plastic in 2019. Supermarkets in Asia are Now Using Banana Leaves Instead of Plastic Packaging.

How many Earths do we need? Image copyright Thinkstock It has been suggested that if everyone on the planet consumed as much as the average US citizen, four Earths would be needed to sustain them. 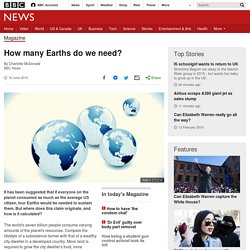 But where does this claim originate, and how is it calculated? The world's seven billion people consume varying amounts of the planet's resources. Compare the lifestyle of a subsistence farmer with that of a wealthy city-dweller in a developed country. More land is required to grow the city dweller's food, more materials are used to build the city dweller's home and workplace, more energy is required for transport, heating and cooling. Early Tests Show a New Technique Could Turn 25% of Our Plastic Waste Into Fuel. Reduce. The 8 Major Forces Shaping the Future of the Global Economy. I can’t change the direction of the wind, but I can adjust my sails to always reach my destination. Taking a fresh look at sustainability via a “leverage points perspective” – Relational Thinking. Have you ever wondered why, with all the science, and all the talk of sustainability, the world still seems to be going the wrong way? 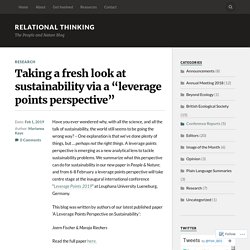 – One explanation is that we’ve done plenty of things, but … perhaps not the right things. A leverage points perspective is emerging as a new analytical lens to tackle sustainability problems. We summarize what this perspective can do for sustainability in our new paper in People & Nature; and from 6-8 February a leverage points perspective will take centre stage at the inaugural international conference “Leverage Points 2019” at Leuphana University Lueneburg, Germany.

2018 Campbells CRR. Getting Real About Where Sustainability is Headed at Campbell. By: Megan Maltenfort, Senior Manager, Corporate Social Responsibility. 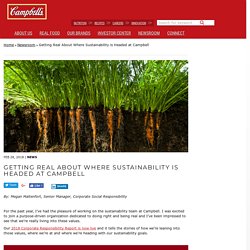 In essence, it changes the ownership model of packaging from consumer to producer. The big question is, will consumers buy into it? New Ellen MacArthur Foundation report finds unhealthy food production makes healthy eating impossible. Hidden killers caused by food production are making healthy eating impossible for people around the world, according to Cities and Circular Economy for Food. 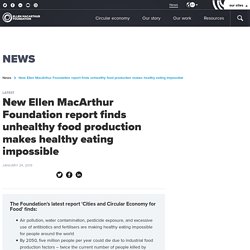 The latest report by the Ellen MacArthur Foundation, produced with analytical support from SYSTEMIQ, was launched at the World Economic Forum Annual Meeting in Davos, Swizerland. It finds that excessive use of pesticides, antibiotics in livestock farming, and poor management of fertilisers could lead to 5 million deaths a year globally by 2050, twice the current number of deaths caused by obesity, and four times the number due to road traffic crashes. 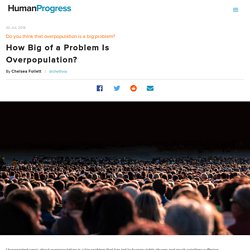 Consider the long history of overpopulation alarmism, and how the doomsayers’ fears have failed to materialize again and again. Two centuries ago, Thomas Malthus’s Essay on Population warned that out-of-control population growth would deplete resources and bring about widespread famine. HumanProgress. Human civilization is very well equipped to overcome resource scarcity in the future, if we can correctly identify, preserve, and expand those policies and institutions that made overcoming resource scarcity possible in the past. 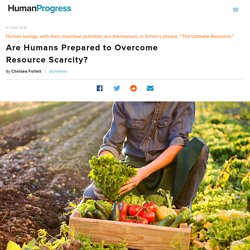 Please read this for a summary of the kinds of horrors that can occur when people mistakenly come to believe that the only solution to resource scarcity is to reduce the size of the population. History has shown that even as the population grows, humanity is perfectly capable of making resources more plentiful by using them more efficiently, increasing their supply and developing substitutes. Population growth can certainly be a problem among nonhuman animals: population explosions among, for example, rabbits, can lead to an exhaustion of natural resources in their environment and eventually a population collapse. Chelsea Follett's answer to Do you think that overpopulation is a big problem? How would resources be distributed in a post scarcity society? How well equipped are we as a civilization to overcome resource scarcity in the future?

Are Humans Prepared To Overcome Resource Scarcity In The Future? Commodities Global Summit organised by FT Live. Opening Keynote Address Keynote Address The Geopolitics of CommoditiesIn an era of strongman leaders and great-power rivalry, geopolitics has emerged as a key driver of commodity prices and investor sentiment. 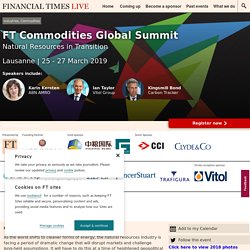 We take a look at some of the factors that could impact markets in the year ahead from the China-US trade war, to the future of Opec, US foreign policy in the Middle East and how China will manage its dependence on imported commodities. CEO Discussion - Trading the Oil MarketAfter a tough start to 2018 as margins were squeezed by a market shift, oil traders have enjoyed more favourable conditions over the past six months.

But markets remain volatile with considerable uncertainty around supply and demand, while competition remains fierce. Break China - Growth, Stimulus and ReformAs the world’s biggest consumer of raw materials China is of crucial importance to the commodities industry.