It's too late for Earth

Food production & the environment. Pollution. The land below us is withering away: Food, water, and lands at risk due to climate change, says IPCC report. Nature’s dangerous decline ‘unprecedented’: 1 million species threatened. RelatedArticlesModule - cc Biodiversity – the diversity within species, between species and of ecosystems – is declining faster than at any time in human history. 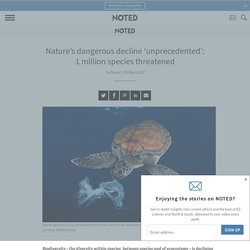 Nature is declining globally at rates unprecedented in human history and the rate of species extinctions is accelerating. A new report has found that around 1 million animal and plant species are now threatened with extinction, many within decades. The report, by the UN's Intergovernmental Science-Policy Platform on Biodiversity and Ecosystem Services (IPBES), assessed the state of the earth's biodiversity based on a review of 15,000 scientific papers. A summary of the report released this week, makes for dire reading. The World Lost a Belgium-sized Area of Primary Rainforests Last Year. The tropics lost 12 million hectares of tree cover in 2018, the fourth-highest annual loss since record-keeping began in 2001. 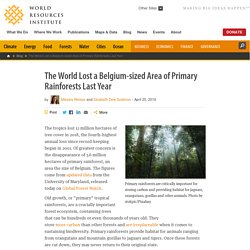 Of greatest concern is the disappearance of 3.6 million hectares of primary rainforest, an area the size of Belgium. The figures come from updated data from the University of Maryland, released today on Global Forest Watch. Old growth, or “primary” tropical rainforests, are a crucially important forest ecosystem, containing trees that can be hundreds or even thousands of years old. They store more carbon than other forests and are irreplaceable when it comes to sustaining biodiversity. Primary rainforests provide habitat for animals ranging from orangutans and mountain gorillas to jaguars and tigers. In 45 years, we have killed 60% of Earth’s wildlife.

Humans have been around for more than 2 million years. But in the last 44 years, we have achieved what we haven’t in all this while: a mass annihilation of our fellow earthlings. Between 1970 and 2014, Earth lost nearly 60% decline of its mammals, birds, fish, reptiles and amphibians, almost all of it due to human activity. The rate at which Earth is losing its biodiversity is comparable only to the mass extinctions.

This and other findings have been published by the World Wildlife Fund in its Living Planet Report 2018, a stinging reminder of the declining health of the planet. 50 people who could save the planet. Last year ended with the incongruous image of 10,000 politicians, businessmen, activists and scientists from 190 countries emitting vast quantities of greenhouse gases as they flew home from Bali clutching the bare bones of a global agreement on climate change. 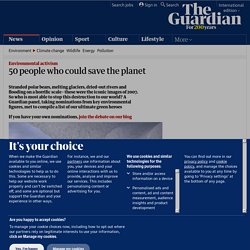 The agreement was to keep on talking to try to reach a deal by 2010. It was a diplomatic triumph, achieved after rows and high dramas, but it leaves all nations a mighty hill to climb. There is no agreement on what emission cuts need to be made by when or by whom, and the US is still deeply reluctant to do anything. The World Counts - Environmental facts and live statistics. Environmental Issues News. Commitment to Democratic Values Predict Climate Change Concern, Study Finds Sep. 20, 2018 — In a new study comparing climate change attitudes across 36 countries, including the United States, commitment to democratic values is the strongest predictor of climate change concern ... read more Green Space Near Home During Childhood Linked to Fewer Respiratory Problems in Adulthood Sep. 18, 2018 — Children who have access to green spaces close to their homes have fewer respiratory problems, such as asthma and wheezing, in adulthood, according to new research. 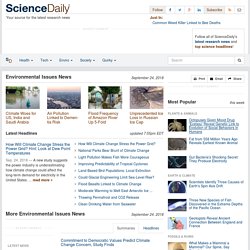 In contrast, children who are ... read more Sep. 18, 2018 — Researchers have long questioned what impact climate change has on the rate at which corals are growing and building reef habitats in the Florida Keys. A Key to Climate Stabilization Could Be Buried Deep in the Mud Sep. 18, 2018 — Scientists have known for years that warming global climate is melting the Greenland Ice Sheet, the second largest ice sheet in the world. Issues Facing Environmentalism. Super-Earths and Goldilocks - The Goldilocks Zone. If another Earth exists in the universe, wouldn't it need to look like, well, Earth? 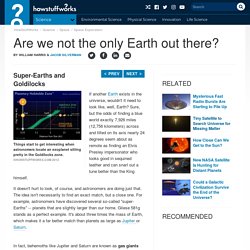 Sure, but the odds of finding a blue world exactly 7,926 miles (12,756 kilometers) across and tilted on its axis nearly 24 degrees seem about as remote as finding an Elvis Presley impersonator who looks good in sequined leather and can snarl out a tune better than the King himself. It doesn't hurt to look, of course, and astronomers are doing just that. The idea isn't necessarily to find an exact match, but a close one. For example, astronomers have discovered several so-called "super-Earths" -- planets that are slightly larger than our home. Gliese 581g stands as a perfect example. What is the Goldilocks Zone and why does it matter in the search for ET? - Science News - ABC News. The Goldilocks Zone refers to the habitable zone around a star where the temperature is just right - not too hot and not too cold - for liquid water to exist on an planet. 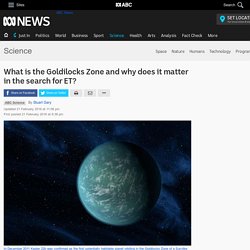 Liquid water is essential for life as we know it. Where we find liquid water on Earth we also find life. Environmental Issues.