This tree reflects my thoughts and findings into the developmental shift that I think is occurring in the dominant evolutionary stage of humans.

I think we are living in interesting times when the developmental level of human running things is changing from modern to postmodern (for lack of a better term (another thing to think about)) Blue sky thinking: is it time to stop work taking over our lives? Three encounters loom large in the anthropologist James Suzman’s memory of his brief but informative stint in the corporate world. 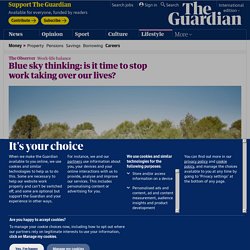 The first was early on, when he told a colleague that he didn’t need to spend the half-million pounds allocated for a task because he could do it for free. His colleague was horrified. “If you don’t spend your budget,” he said, “they won’t think we’re doing anything!” Soon afterwards, Suzman was chatting with a board director about what they’d do if they won the lottery. Suzman thought of the director’s massive townhouse and annual bonus. Later, the same director observed to Suzman and the rest of the senior management team that they spent more time with each other than they did with their families. Solving A Problem That Has Not Been Named — Personal Growth. Solving A Problem That Has Not Been Named The human mind needs clear concepts to make sense of the world. 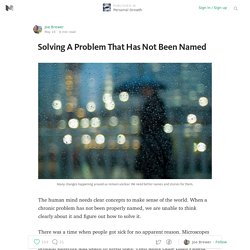 When a chronic problem has not been properly named, we are unable to think clearly about it and figure out how to solve it. There is something extraordinary happening in the world — The Global Future of Work. LOW-TECH MAGAZINE. Renewable Energy After COP21: Nine issues for climate leaders to think about on the journey home Post Carbon Institute.

Renewable Energy After COP21: Nine issues for climate leaders to think about on the journey home COP21 in Paris is over. 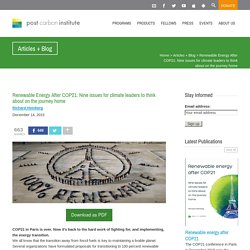 Now it’s back to the hard work of fighting for, and implementing, the energy transition. We all know that the transition away from fossil fuels is key to maintaining a livable planet. Several organizations have formulated proposals for transitioning to 100 percent renewable energy; some of those proposals focus on the national level, some the state level, while a few look at the global challenge. David Fridley (staff scientist of the energy analysis program at Lawrence Berkeley Laboratory) and I have been working for the past few months to analyze and assess many of those proposals, and to dig deeper into energy transition issues—particularly how our use of energy will need to adapt in a ~100 percent renewable future.

Voices from the Status Quo. Voices for change. Definitions. Globalization - Good or Bad? Cracked Hymn. Shades of Gray. First they ignore you then you win. Create a new future. Get Apocalyptic: Why Radical is the New Normal by Robert Jensen. Feeling anxious about life in a broken economy on a strained planet? 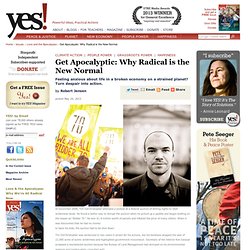 Turn despair into action. posted May 24, 2013 In December 2008, Tim DeChristopher attended a protest at a federal auction of drilling rights to Utah wilderness lands. Archetypes of Dissent. Radical politics is defined by opacity, anonymity and dissimulation … and by invisibility: by the political presence of absence. 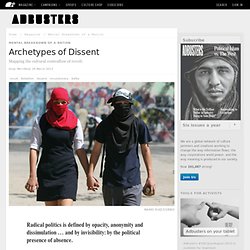 The power of surprise, of secret organization, of rebelling, of demonstrating and plotting covertly, of striking invisibly, and in multiple sites at once, is the key element that the Invisible Committee, anonymous authors of The Coming Insurrection, affirm for confronting a power whose firepower is vastly superior. To be explicitly visible, to appear explicitly – in a maneuver, in organizing, even in an occupation –“is to be exposed, that is to say above all, vulnerable.” Here Guy Fawkes and black ski masks become emblems of veritable nobodies, of invisible underground men and women, of people without qualities who want to disguise their inner qualities, who shun visibility and have little desire to be the somebody the world wants them to be.

These bodies are publicly expressive bodies yet are bodies weary of revealing too much of themselves. What Is the Common Good? (Image: Jared Rodriguez / t r u t h o u t; Adapted: Brian Hillegas, Reigh LeBlanc, abrinsky)This article is adapted from a Dewey Lecture by Noam Chomsky at Columbia University in New York on Dec. 6, 2013. 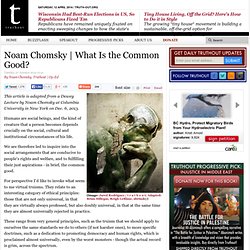 Insufficient Funds: A Story of Canada. 4 ways the world could actually end. While humanity has survived the apocalypse on Dec. 21, which some people believe the Mayans predicted hundreds of years ago, experts say there are legitimate threats that could potentially wipe out the human race. 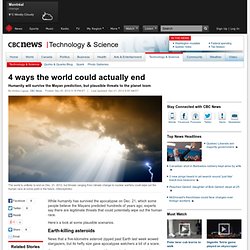 Here’s a look at some plausible scenarios. Earth-killing asteroids News that a five-kilometre asteroid zipped past Earth last week wowed stargazers, but its hefty size gave apocalypse watchers a bit of a scare. If an asteroid measuring about one kilometre in diameter struck the Earth, the impact would be enough to leave a 10-kilometre-wide crater and kill 90 per cent of humanity, says Jay Melosh, professor of planetary sciences at Purdue University. This NASA radar image from 2011 shows asteroid 2005 YU55. The Ever-Nearing Apocalypse. Would You Rather Be Over-Informed or Happy? Toward Planetary Citizenship (1960) Civic Consciousness in a Global Age. This essay was originally published in the March 2012 issue of the Journal of Integral Theory and Practice. 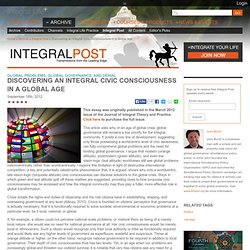 Click here to purchase the full issue. This article asks why, in an age of global crisis, global governance still remains a low priority for the integral community. It posits a civic line of development, suggesting only those possessing a worldcentric level of civic awareness can fully comprehend global problems and the need for binding global governance. I argue that modern (orange altitude), postmodern (green altitude), and even low vision-logic (teal altitude) worldviews still see global problems nationcentrically rather than worldcentrically. I explore this limitation in light of destructive international competition; a key and potentially catastrophic phenomenon that, it is argued, shows why only a worldcentric, late vision-logic (turquoise altitude) civic consciousness can disclose solutions to the global crisis. 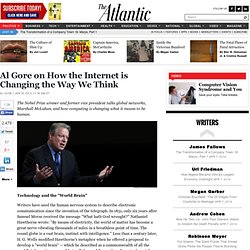 The Sunday Edition with Michael Enright. The Myth of Human Progress and the Collapse of Complex Societies. (Image: Breaking profiles via Shutterstock)Truthout doesn't take corporate money and we don't shy away from confronting the root causes of injustice. 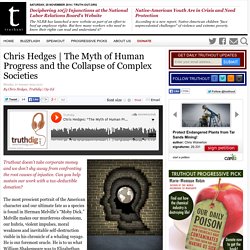