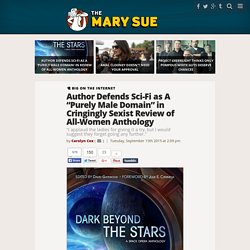 Reviewers have used Amazon to express their concern over everything from the power dynamics in a romance novel about a Nazi concentration camp commander to “SJW politics” in Star Wars books; and now someone is using it as a platform to share the ol’ fashioned belief that women just don’t write good science fiction. Yawn. We were recently contacted by some of the women involved in Dark Beyond the Stars, an all-female sci-fi anthology. The anthology has a 66% 5-star rating on Amazon overall, but received this 2-star review last Friday (under the title “Space Opera It Ain’t”): A very surprised looking sperm whale and a bowl of petunias. Or why, if the people ‘really the only reason ‘Ancillary Justice’ won a Hugo Award’ was that it was much better than ‘Warbound’, that there is no ideological bias at all in the entire Hugo Award process, and that, indeed, they personally didn’t know what so-and-so politics were, are right, then Ann Leckie and her fellow winners should buy a lottery ticket and become a multi-millionaires overnight. 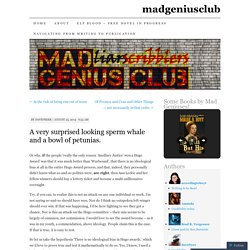 Try, if you can, to realize this is not an attack on any one individual or work, I’m not saying so-and-so should have won. Nor do I think no outspoken left-winger should ever win. The Problem of Engagement — a guest post by Toni Weisskopf. *As you know, I’ve been worried about the direction of conventions, of fandom, of the… public face of our field. 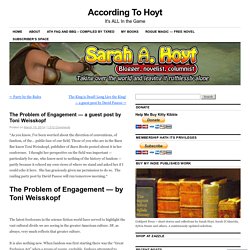 Those of you who are in the Baen Bar know Toni Weisskopf, publisher of Baen Books posted about it in her conference. I thought her perspective on the field was important — particularly for me, who know next to nothing of the history of fandom — partly because it echoed my own views of where we stand and asked her if I could echo it here. She has graciously given me permission to do so. The raiding party post by David Pascoe will run tomorrow morning. The latest fooforaws in the science fiction world have served to highlight the vast cultural divide we are seeing in the greater American culture. Some Sad Puppy Data Analysis. Image from Flickr user Bill Lile. 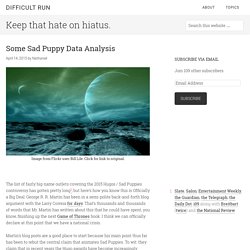 Click for link to original. The list of fairly big-name outlets covering the 2015 Hugos / Sad Puppies controversy has gotten pretty long1, but here’s how you know this is Officially a Big Deal: George R. R. Martin has been in a semi-polite back-and-forth blog argument with the Larry Correia for days. That’s thousands and thousands of words that Mr. Book. Martin’s blog posts are a good place to start because his main point thus far has been to rebut the central claim that animates Sad Puppies. As these heavyweights have been trading expert opinion, personal stories, and plain old anecdotes, it just so happens that I spent a good portion of the weekend digging into the data to see if I could find any objective evidence for or against the Sad Puppy assertions.

One additional note: unless otherwise state the Hugo categories that I looked into were the literary awards for best novel, novella, novelette, and short story. Finding 1: Sad Puppies vs. The Night The Hugos Burned The Sad and Rabid Puppies Explained. I read the 100 “best” fantasy and sci-fi novels - and they were shockingly offensive. When it comes to the best of anything, what do you expect? 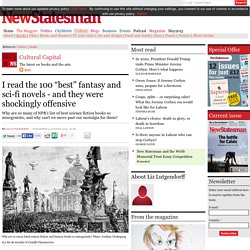 If it’s science fiction and fantasy novels you want epic adventures and getting out of impossible situations. 60 Influential Figures in Fantasy, Index. Well this ended up a lot bigger than I originally intended… This is a project to put together, largely off the top of my head and with little revision, a list of fifty authors with the greatest influence on the Fantasy genre. 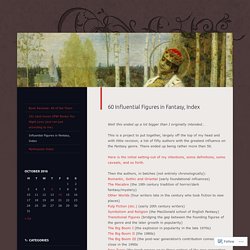 There ended up being rather more than 50. Here is the initial setting-out of my intentions, some definitions, some caveats, and so forth. Then the authors, in batches (not entirely chronologically):Romantic, Gothic and Oriental (early foundational influences)The Macabre (the 19th century tradition of horror/dark fantasy/mystery)Other Worlds (four writers late in the century who took fiction to new places)Pulp Fiction (etc.) Some comments on the Hugos and other SF awards. I’ve been doing my best to stay away from the current ruckus over the Hugo Awards, but it’s now spread widely enough that it’s spilled onto my Facebook page, and it’s bound to splatter on me elsewhere as well. 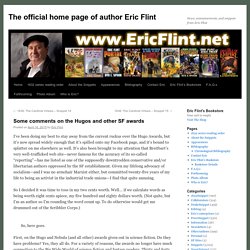 It’s also been brought to my attention that Breitbart’s very well-trafficked web site—never famous for the accuracy of its so-called “reporting”—has me listed as one of the supposedly downtrodden conservative and/or libertarian authors oppressed by the SF establishment. Given my lifelong advocacy of socialism—and I was no armchair Marxist either, but committed twenty-five years of my life to being an activist in the industrial trade unions—I find that quite amusing. So I decided it was time to toss in my two cents worth. Well… if we calculate words as being worth eight cents apiece, my five hundred and eighty dollars worth. 2015 Hugo Awards and the History of Science Fiction Culture Wars. Leftists Attack Libertarian Sci-Fi. It is a great time to be a science fiction fan. 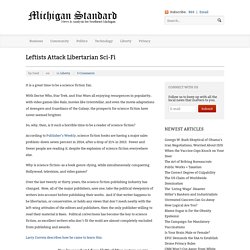 With Doctor Who, Star Trek, and Star Wars all enjoying resurgences in popularity, with video games like Halo, movies like Interstellar, and even the movie adaptations of Avengers and Guardians of the Galaxy, the prospects for science fiction have never seemed brighter. So, why, then, is it such a horrible time to be a reader of science fiction? According to Publisher’s Weekly, science fiction books are having a major sales problem–down seven percent in 2014, after a drop of 21% in 2013. Fewer and fewer people are reading it, despite the explosion of science fiction everywhere else. Why is science fiction–as a book genre–dying, while simultaneously conquering Hollywood, television, and video games? Over the last twenty or thirty years, the science fiction publishing industry has changed. Larry Correia describes how he came to learn this: You know what I found? Larry isn’t the only writer to notice the anti-libertarian bias in science fiction.

Tag Archive for "Diversity in YA" - Malinda Lo. Broken Hugo Fisking – D Jason Fleming. THE STATE OF THE SF MAGAZINES. Some opinions harvested from Locus online and correspondence by Gregory Benford February 2015. 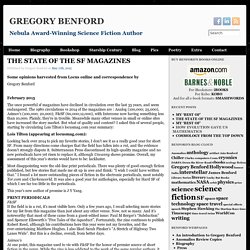 Breakfast of bullshit: Futurephobia, the Hugos and the invention of SF’s past. Sunday, June 14, 2015. 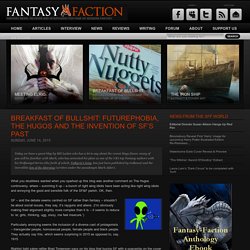