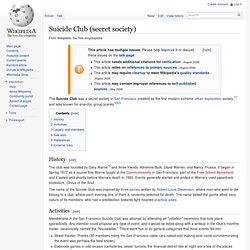 It began in Spring 1977 as a course that Warne taught at the Communiversity in San Francisco, part of the Free School Movement, and it lasted until shortly before Warne's death in 1983. Events generally started and ended in Warne's used paperback bookstore, Circus of the Soul. Membership in the San Francisco Suicide Club was attained by attending an "initiation" ceremony that took place sporadically. Underground Part 2 – San Francisco « Excerpts from the Brain. 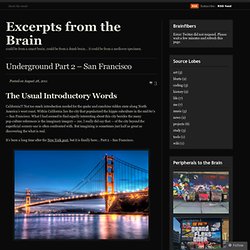 Not too much introduction needed for the quake and sunshine ridden state along North America’s west coast. Within California lies the city that popularized the hippie subculture in the mid 60′s — San Francisco. What I had seemed to find equally interesting about this city besides the many pop-culture references is the imaginary imagery — yes, I really did say that — of the city beyond the superficial scenery one is often confronted with. But imagining is sometimes just half as great as discovering the what is real. It’s been a long time after the New York post, but it is finally here… Part 2 – San Francisco. Secret tunnel hike at Fort Funston - San Francisco City Guide. The secret city under chinatown.. Did Accused Spy Reveal Secret Tunnel? Federal investigators believe accused spy Robert Hanssen may have revealed to the KGB the existence of a secret tunnel under the Russian embassy in Washington, D.C. 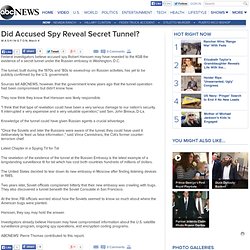 The tunnel, built during the 1970s and '80s to eavesdrop on Russian activities, has yet to be publicly confirmed by the U.S. government. Sources tell ABCNEWS, however, that the government knew years ago that the tunnel operation had been compromised but didn't know how. Archaeologists Probe Secret Tunnels in California. FRESNO, Calif. – Tunnels run beneath Chinatown in Fresno, Calif.: brick-walled passages that were once home to people and activities that couldn't be mentioned aboveground. 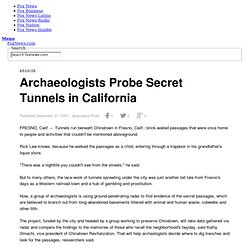 Rick Lew knows, because he walked the passages as a child, entering through a trapdoor in his grandfather's liquor store. "There was a nightlife you couldn't see from the streets," he said. But to many others, the lace-work of tunnels sprawling under the city was just another tall tale from Fresno's days as a Western railroad town and a hub of gambling and prostitution. Now, a group of archaeologists is using ground-penetrating radar to find evidence of the secret passages, which are believed to branch out from long-abandoned basements littered with animal and human waste, cobwebs and other filth. Golden Gate [X]Press : The Secret Tunnels Under SF. On hands and knees, they crawl along an underground passage. 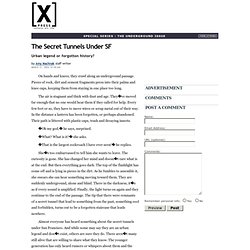 Pieces of rock, dirt and cement fragments press into their palms and knee caps, keeping them from staying in one place too long. The air is stagnant and thick with dust and age. Theyve moved far enough that no one would hear them if they called for help. Underground tunnels in Golden Gate Recreational Area... Secret Tunnels of San Francisco Chinatown. A few months ago, I came across an article written about the secret tunnels of San Francisco Chinatown. ( . 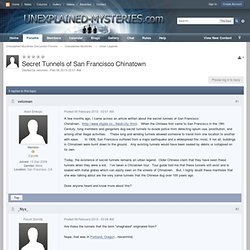 When the Chinese first came to San Francisco in the 19th Century, tong members and gangsters dug secret tunnels to evade police from detecting opium use, prostitution, and among other illegal activities. These long and winding tunnels allowed someone to travel from one location to another with ease. In 1906, San Francisco suffered from a major earthquake and a widespread fire; most, if not all, buildings in Chinatown were burnt down to the ground. There's a World Going On Underground: Creepy S.F. Tunnels Latest Fodder For History Channel. Tunnel Vision. Secret passage. Secret passages, also commonly referred to as hidden passages or secret tunnels, are hidden routes used for stealthy travel. 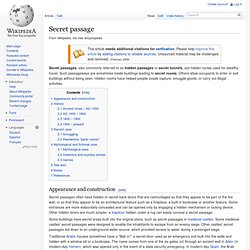 Home » *Top Pick*, San Francisco, Sports & Fitness, Walks & Tours Embark on an exploratory adventure with a walk around the sand dunes at Fort Funston and Lake Merced on Saturday, August 6. 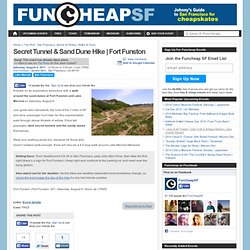 Join guide Alex Genadinik, the host of the 7-Hills of SF and wine scavenger hunt hike, for this unpredictable walk through dense thickets of willow, 5-foot tall passages, dark secret tunnels and the sandy dunes themselves. Wear your walking shoes too, because for those who haven’t walked quite enough, there will also be a 4.5 loop walk around Lake Merced afterward. Secret Underground Bases. Underground Bases We recently came across a very interesting list from a book called Entrances to Subterranean Tunnels "Underground Alien Bases" (UAB) ISBN: 0-938294-92-X (UAB) which purports to list all the known underground entrances to bases. 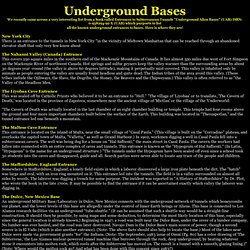 Here is where they are! New York City There is an entrance to the tunnels in New York City "in the vicinity of Midtown Manhattan that can be reached through an abandoned elevator shaft that only very few know about The Nahanni Valley (Canada) Entrance This covers 250 square miles in the southern end of the Mackenzie Mountains of Canada. It lies almost 550 miles due west of Fort Simpson on the Mackenzie River of northwest Canada. Hot springs and sulfur geysers keep the valley warmer than the surrounding areas by about 30 degrees year -round (the valley is above 60 degrees latitude), making it perpetually mist-covered.