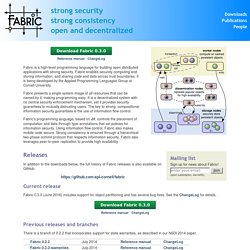 Fabric enables securely computing and storing information, and sharing code and data across trust boundaries. It is being developed by the Applied Programming Languages Group at Cornell University. Fabric presents a single-system image of all resources that can be named by it, making programming easy. It is a decentralized system with no central security enforcement mechanism, yet it provides security guarantees to mutually distrusting users. The key to strong, compositional information security guarantees is the use of information flow control.

Fabric's programming language, based on Jif, controls the placement of computation and data through type annotations that set policies for information security. Releases In addition to the downloads below, the full history of Fabric releases is also available on GitHub: Current release Previous releases and branches Related group publications. Futhark - High-Performance Functional Programming. Formal Modeling with Formula. FORMULA 2.0: Formal Specifications for Verification and SynthesisFormula specifications are highly declarative logic programs that can express rich synthesis and verification problems. 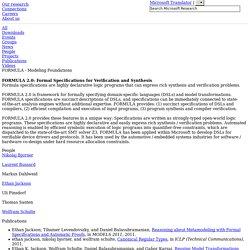 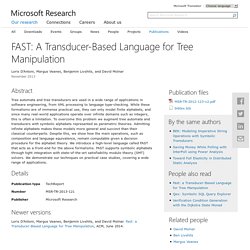 While these formalisms are of immense practical use, they can only model finite alphabets, and since many real-world applications operate over infinite domains such as integers, this is often a limitation. To overcome this problem we augment tree automata and transducers with symbolic alphabets represented as parametric theories. 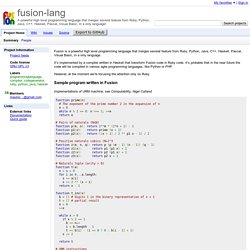 It’s implemented by a compiler written in Haskell that transform Fusion code in Ruby code. It’s probable that in the near future the code will be compiled in various agile programming languages, like Python or PHP. However, at the moment we’re focusing the attention only on Ruby. Sample program written in Fusion Implementations of URM machine, see Computability, Nigel Cutland. function prime(n) # The exponent of the prime number 2 in the expansion of n e = 0 while n % 2 == 0: n >>= 1; ++e return e. The Fancy Programming Language. F Programming Language Homepage. [ About F | Compilers | Books ] [ Resources | Example Code ] ``Perfection is achieved, not when there is nothing more to add, but when there is nothing left to take away.'' - Antoine de Saint Exupery ``I really appreciate the F software. 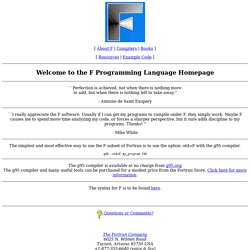 Usually if I can get my programs to compile under F, they simply work. DBIS - Datenbanken und Informationssysteme. Overview FLORID (F-LOgic Reasoning In Databases) is a deductive object-oriented database system employing F-Logic as data definition and query language. 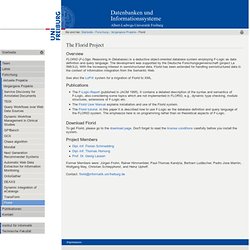 The development was supported by the Deutsche Forschungsgemeinschaft (project La 598/3-2). With the increasing interest in semistructured data, Florid has been extended for handling semistructured data in the context of Information Integration from the Semantic Web. See also the LoPiX system for a migration of Florid to XML. Flora-2. Foma - finite-state compiler and C library. November 17, 2012: foma 0.9.17 released. 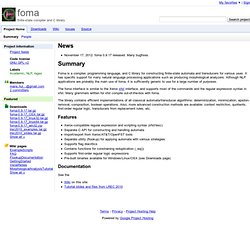 Many bugfixes. Foma is a compiler, programming language, and C library for constructing finite-state automata and transducers for various uses. It has specific support for many natural language processing applications such as producing morphological analyzers. Although NLP applications are probably the main use of foma, it is sufficiently generic to use for a large number of purposes.

The foma interface is similar to the Xerox xfst interface, and supports most of the commands and the regular expression syntax in xfst. The library contains efficient implementations of all classical automata/transducer algorithms: determinization, minimization, epsilon-removal, composition, boolean operations. Finitio - A Data Language. Frege/frege. Home · faylang/fay Wiki. FLORA-2. FoCaLiZe. FUN - Fun Programming Language. The Frenetic Project. Home · faylang/fay Wiki. The Fancy Programming Language. The programming language of OpenFOAM. In order to understand the way in which the OpenFOAM library works, some background knowledge of C++, the base language of OpenFOAM, is required; the necessary information will be presented in this chapter. 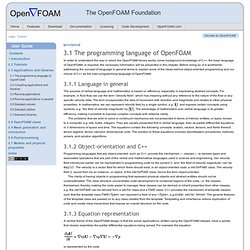 Before doing so, it is worthwhile addressing the concept of language in general terms to explain some of the ideas behind object-oriented programming and our choice of C++ as the main programming language of OpenFOAM. 3.1.1 Language in general The success of verbal language and mathematics is based on efficiency, especially in expressing abstract concepts. For example, in fluid flow, we use the term “velocity field”, which has meaning without any reference to the nature of the flow or any specific velocity data. The term encapsulates the idea of movement with direction and magnitude and relates to other physical properties. . , and express certain concepts using symbols, e.g. . Frege Programming Language. Fornax-language - Grammar and Lexical Analyzer for a Matrix Manipulation Language. Fornax is a simple and premature programming language especially designed for "matrix manipulation". 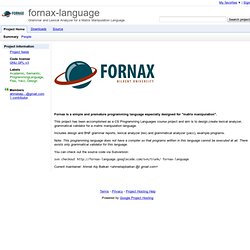 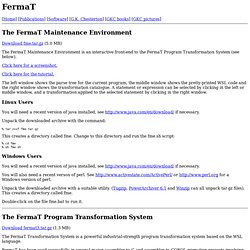 The False Programming Language I designed this language in '93 with two particular objectives: confusing everyone with an obfuscated syntax, and designing an as powerful language as possible with a tiny implementation: in this case a compiler executable of just 1024 bytes (!) , written in pure 68000 assembler. Here's a couple of example programs to give a taste of what False looks like: Not just toy programs have been written in False, the list of programs in the distribution includes various useful convertion utilities, a compression program, Life, an expression evaluator, a module ripper, queens, tic-tac-toe, a html-table generator, and, probably the biggest False program ever, a complete working BreakOut clone.

If you want to look at all of this yourself, get the full False 1.2b distribution zip or lha (includes all source, including the compiler and portable interpreter). False has inspired other people to implement similarly perverse languages. “Brainfuck” by Urban Mueller. F-Script Home. Free Server Pages. Version 0.0.0 (dd-mm-yyyy)14-11-1999 FLASH:FSP Conceptual version released!!! What is "Free Server Pages" FSP is interesting web-related project for making tool for embeding ANY program language into the web page source. This project is very different from Microsoft ASP, because ASP is server side parcer/translator. The FSP will be free under GPL. It will be realized with Perl 5 language, and will be strong oriented to UNIX-like OS. FramerD Home Page. Axiomatic Software - Frogbit. Functional Nets. Introduction Funnel is a programming language based on Functional Nets.

Most of them are not maintained, apart from the Mac version. Fril is licensed for educational, research or private use by any individual or organisation. It may not be sold or included in any system used commercially without prior written agreement from the authors. The software is provided on an "as-is" basis, with no warranty or guarantee, and no liability arising from its use. You must read and agree to the licensing conditions before installing Fril or any of the packages listed below. Preliminary online version of the built-in predicate reference manual. FormulaOne Compiler. Cross-platform Scripting engine for delphi/c++Builder/kylix/ lazarus - Fast Reports Inc. Flexible and powerful A unique feature of FastScript is its ability to use several languages (PascalScript, C++Script, BasicScript and JScript). Fast Lightweight Expression Evaluator.